Isn't it a shame when the kidnappers of children get no respect?

What is this world coming to when a woman who breaks the law and kidnaps her child to keep her away from the other parent (who has never done anything to harm the child) can't get a fair shake from the media?

At least that's what our "friend" Peter LaBarbera and Lifesite News thinks about the Janet Jenkins/Lisa Miller custody case:

Janet Jenkins, a practicing lesbian who was once in a “civil union” with ex-lesbian Lisa Miller, is conducting a media campaign to locate Miller’s seven-year-old daughter in an attempt to gain custody of the child.

Miller’s daughter, Isabella, was conceived via artificial insemination during the pair’s relationship, and has no biological relationship with Jenkins. Miller disappeared with Isabella in December, apparently in an effort to prevent a Vermont judge from transferring custody of her child to Jenkins.

But Jenkins is doing numerous interviews with mainstream media outlets, ostensibly in an effort to locate Isabella (described by Jenkins in one interview as “my child”), which are uncritically repeating her charges against Miller, while failing to mention Miller’s charges against Jenkins – -including that her relationship with Jenkins was abusive.

This ridiculous post recounts an interview that Miller gave to Lifesite News accusing Jenkins of abusive behavior. Of course the post omits the fact that the allegations were investigated by Virginia's Child Protective Services and deemed as "unfounded."

But the main sticking point here is that both LaBarbera and Lifesite News is trying to garner sympathy for Miller. To them, she is the "victim of a media campaign out to demonize her."

But hasn't Miller demonized herself in the eyes of the public by kidnapping Isabella?

I'm sure the media would love to get her side of the story but seeing that she has gone into hiding instead of following the law, speaking to her would be difficult, wouldn't it?

Washington Post columnist: Lisa Miller needs to come out of hiding and face her chaos

Janet Jenkins pleads for help in finding her daughter

Posted by BlackTsunami at 10:51 AM No comments: Links to this post 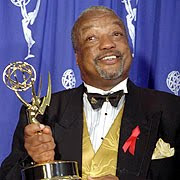 The theater always had a special place in the heart of actor Paul Winfield, but his career included numerous film and television roles. He was nominated for several acting awards and won an Emmy in 1995.

Paul Edward Winfield was born in Los Angeles on May 22, 1941 to Lois Beatrice Edwards, a garment-industry worker and union organizer. When Winfield was eight, his mother married Clarence Winfield, a construction worker.

One of Winfield's vivid memories from those years was seeing Mark Robson's 1949 film Home of the Brave, in which African-American actor James Edwards played a leading part rather than the role of servant to which actors of color were typically confined.

When the family returned to Los Angeles, Winfield attended Manual Arts High School, where he excelled in both music and acting. He was named best actor in the Speech and Drama Teachers Association Drama Festival for three consecutive years.

Because of these achievements he was offered a scholarship to Yale but, apprehensive about fitting in there, chose to accept a two-year scholarship at the University of Portland. He subsequently attended other colleges on the West Coast, including UCLA, which he left in 1964 six credits short of a degree when professional opportunities beckoned.

In addition to appearing on stage he served as artist in residence at Stanford University during the 1964-1965 academic year.

Winfield became a contract player for Columbia Pictures in 1966. Initially he continued his stage work and played minor parts on television, but in 1969 Sidney Poitier chose him for a role in Robert Alan Arthur's film The Lost Man.

Winfield also became familiar to viewers of the small screen with a regular role as Diahann Carroll's boyfriend on the situation comedy Julia (1968-1970), a groundbreaking series that many consider to have been influential in increasing opportunities for African-American actors on television.

Winfield turned in a memorable performance in Martin Ritt's 1972 film Sounder, which earned him a nomination for an Academy Award as best actor.

Read more »
Posted by BlackTsunami at 7:28 AM 5 comments: Links to this post