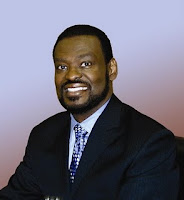 Harry Jackson is probably the most prominent black pastor in religious right circles. He is a favorite due to not only his futile struggle to get a vote going against same-sex marriage in D.C. but also his insistence that the gay community is attempting to unfairly piggyback on the struggles of the African-American civil rights movement.

According to the Minnesota Independent:

The leaders of You Can Run But You Cannot Hide Intl., Inc., a hard rock ministry that holds Christian assemblies in public schools around the Midwest, said that locking up gays and lesbians in prison is the “right” and “moral” thing to do.

. . . On the group’s radio show, broadcast live from the Heritage Foundation on May 22, co-leader Jake McMillian praised the actions of the African nation of Malawi which has recently arrested a gay couple for getting engaged.

“They are very conservative,” he said. “They sentence people for crimes against nature.”

Frontman Bradlee Dean added, “They are very moral; they uphold the laws.”

McMillian continued, “We have got countries all over the world that are standing for what’s right and what’s wrong. In Rwanda, there’s legislation right now that repeat offenders of homosexuality will spend their life in prison.”

People for the American Way recorded this program where supposedly Jackson not only came on to say that he has been reaching out to the group, but also compared them to the late Martin Luther King, Jr.

My guess is that Bernice King, the daughter of Martin Luther King Jr. and the head of the Southern Christian Leadership Conference - an organization which King once led - will most likely be silent about this bizarre usage of her father's name.

Just like she was silent when World Net Daily writer Molotov Mitchell invoked her father's name in support of that awful "Kill the Gays" bill in Uganda.

Bear in mind that King was very quick to declare that she was sure in her "sanctified soul" that her father "didn't take a bullet for same-sex marriage."

I wonder if she feels that King was assassinated to support genocide?

King's silence and Jackson's hypocrisy merely highlights the unfortunate fact that during the controversy regarding the Ugandan bill and the Malawi couple, the African-American community - particularly the leadership - have been shamefully silent.

Where are these same righteously indignant people who were so quick to voice their anger at "rich white gays" exploiting the struggles of black people for their own selfish purposes when people like Scott Lively were leading Africans to pass laws against their own people for simply being gay?

When I was a teenager, I heard so much about apartheid in South Africa and how black colleges should divest from the country. The movement was featured in countless African-American articles, television shows, and speeches by black leaders.

Certainly African gays and lesbians deserve the same amount of support. But they haven't gotten it yet from the African-American community and I don't think they will.

The silence of the Black American community during the persecution of their African brothers and sisters (and Jackson's embracing of those who would support this persecution) serves to remind me that no one person or group owns the patent to struggling for the right to live free and in dignity unencumbered by someone else's ignorance.

But it also reminds me that even though no one owns this right, there are so many people ready to squander it.

Posted by BlackTsunami at 5:15 PM No comments: Links to this post

Lively: Repealing DADT Will Outrage Muslims and Lead To More Terrorism - After the crap you pulled in Uganda, Scott Lively, perhaps you should keep your mouth closed on this one.

The hundreds of churches in Iowa that you should avoid - They don't 'hate' gay couples. They just want to force them to divorce.

Same-sex partners of federal workers can start applying for benefits next month - Well this is good news.

Dissecting the ACORN ‘Pimp’s’ New Census Video - James O'Keefe, i.e. the Acorn Pimp, should have known that his 15 minutes were up when he was grilled in an interview on - of all places - Good Morning America. Now Newsweek destroys him. The lgbt community needs to pay attention to this because sooner or later, O'Keefe's type of "propaganda journalism" will target our organizations.

Posted by BlackTsunami at 8:33 AM 2 comments: Links to this post

DADT Repeal: Mike Mullen was working for 'TEH GAYS!'

There are times when the American Family Assciation's One News Now is infuriating with its slanted anti-gay coverage.

Then there are other times when you can't help but to laugh.

For example this piece regarding the possible DADT repeal voted on by the House and Admiral Mike Mullen, the Joint Chiefs of Staff.

Mullen under fire for 'dereliction of his duty'

A conservative military watchdog who has lobbied hard against repeal of the 1993 law banning homosexuals from military service is blasting the chairman of the Joint Chiefs of Staff for the way he has conducted himself throughout the debate.


. . . Elaine Donnelly, president of the Center for Military Readiness (CMR), believes Admiral Mike Mullen (USN) should be held accountable for how he has handled the issue of the ban's repeal.


"As the chairman of the Joint Chiefs of Staff, he does not have operational responsibilities," she contends. "His sole role is to convey to the president the best professional advice of the other four services.


"He did not do that," Donnelly argues. "Instead, he served as a conduit for the political views of the president. In other words, [he] conveyed views from the president on down rather [than] from the other service chiefs on up. That, I think, was a dereliction of his duty."

That's the gist of the article. To One News Now, Mullen is "under fire" because one activist (who by the way has no expertise in the military at all - as witnessed by her disastrous testimony in front Congress on the issue two years ago) is complaining that she didn't like the way he handled the issue.

And to make matters even more comical is the fact that at the same time this article was published, Mullen was voicing the fact that he didn't exactly like the vote because of the time frame.

Thereby showing just how clueless Donnelly has been in throughout this discussion.

That's not a fire, that's a wet match.