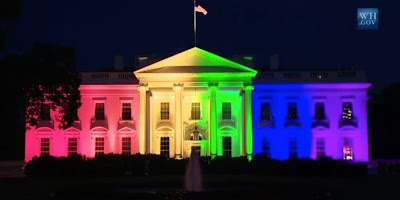 Citing HB2, national group pulls out of meeting planned at Rowan-Salisbury Schools - Just a reminder that the boycott of North Carolina because of HB2 is still on.

While Trump Grabs Headlines, Texas Republicans Launch New Wave of Assaults on LGBT Rights - We are paying attention.
Posted by BlackTsunami at 9:10 AM No comments:

Trump proves that the religious right is a 'religious fraud'

In a short but sweet post, Mother Jones blogger Kevin Drum  nails something I've mentioned on this blog and what we all need to be pointing out every chance we get.

Trump's election and the silence of religious right organizations with regards to his behavior since then only proves that their entire routine about upholding morality and Christian values is just talk.

Groups like the American Family Association and the Family Research Council cheerlead the possible elimination of Obamacare (even though it will leave millions of Americans without health care) or urge Trump to push against a law which restricts pastors and churches from endorsing political candidates. Meanwhile so-called religious leaders like Franklin Graham and the Catholic Church are silent when Trump threatens to sign executive orders against immigrants, which doesn't exactly hold up to the tenet Jesus spoke about when he told the parable of  The Good Samaritan.

In the case of Graham, the silence is truly sad, seeing that he doesn't ever seem to be at a loss for words when it comes to denigrating lgbts and especially smearing the transgender community.

As Drum points out, religious right groups and leaders aren't interested in acting as Trump's moral conscience. They are too busy providing him with an alibi.

The entire piece is wonderful reading. But I especially loved this part:

The Christian right has never been about actual faith. Like any other interest group, they just want what they want: abortion restrictions, money for private schools, opposition to gays, and so forth. As long as you're on board, they don't care what's in your heart. They never have, and that's why the suggestion that Democrats need to be more publicly devout has always been so misguided. Faith doesn't matter. Empathy for people of faith doesn't matter. The only thing that matters is supporting the Christian right's retrograde social views, and Democrats were never going to do that.

Posted by BlackTsunami at 4:44 AM No comments: