In its zeal to stigmatize married same-sex couples, the Family Research Council sometimes slips up, displaying its duplicitous nature. 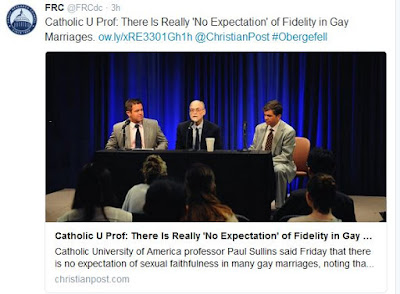 The tweet links to a  Christian Post article which claims that same sex couples have no expectations of fidelity in their marriages. In fact, the first paragraph says the following:


Catholic University of America professor Paul Sullins said Friday that there is "no expectation" of sexual faithfulness in many gay marriages, noting that studies have shown only a small minority of gay marriages are truly monogamous.

According to the article, Sullins was participating in a Family Research Council panel discussion along with Institute on Religion &  Democracy President Mark Tooley and the director of FRC's Center for Religious Liberty Travis Weber about the effects of marriage equality one year after the Obergefell decision made it the law of the land.

As if it's any surprise, all three were negative about the effects of the Obergefell decision. Sullins, in particular, got my attention because of his claims with regards to the monogamy of same-sex couples.

Sullins then weighed in saying that in today's society, with the rise of gay marriage and no-fault divorce, many people believe marriage is to be a set of "personal understandings" rather than something that should be "regulated by agreements."

"That is particularly appropriate to Obergefell because we know from long studies that only a small minority of gay male marriages are monogamous," Sullins said. "The infidelity is a component of the large majority of same-sex male relationships, a little bit smaller minority among lesbian relationships."


But the problem with Sullins' claim lies in the studies cited. While the article does not contribute the citation of the studies below to Sullins, it doesn't take a genius to realize that there is a major deception going on:

According to the Daily Beast, at least two studies were conducted in the last 15 years that, among other things, analyzed the faithfulness in gay relationships.

According to the studies from San Francisco State University and Alliant International University, about half of gay relationships are open relationships where partners are allowed to engage in sexual activities with someone else other than their partner.

It is believed the rate of gay relationships that are non-monogamous is higher than both heterosexual and lesbian relationship; however, lack of research makes it unclear as to how much higher that rate is.

In 2000, Esther Rothblum, a professor at San Diego State University, conducted research that found that only 15 percent of straight husbands had sex outside of their relationship.


It's fascinating to watch the sleight of hand here. The Christian Post article's title implies married gay couples don't expect monogamy in their relationships, but the two studies used to back this up seems to have contained very few or no married same-sex couples.  I looked up both links to verify this fact.

However The Christian Post, as clearly seen in the excerpt above, made it seem that the Daily Beast was citing two different studies even though the links it posted led to the same study. )

Then The Christian Post article compares that study to one of heterosexual couples who are in fact clearly married.

In other words, the Family Research Council and The Christian Post sloppily teamed up to push an idea that same-sex couples are not monogamous.  And it leads me to wonder that if the study the article cited didn't come from Sullins, just what studies did he cite.

Or did Sullins cite any specific studies at all?
Posted by BlackTsunami at 3:17 PM 3 comments:

The Awkward Love Story of Trump and American Evangelicals - Again, DO NOT take the relationship between Donald Trump and the religious right lightly on any regard.

Pope says Church should ask forgiveness from gays for past treatment - Yes it does. Past AND present treatment. But I won't wait on the apology. Some will say that they are merely following Scripture with regards to their treatment of lgbts, but watch how they overlook the Scriptures which speak of not bearing false witness.

Tennessee Judge Ignores Supreme Court, Rules Parental Rights Apply Only To ‘Husbands’ - And we have a new problem . . .

The First Openly Gay Charlotte City Councilwoman Opens Up About HB2 - The argument over lgbt equality in the South.

A Year After Marriage Equality, It's Time For Media To Stop Giving Anti-LGBT Liars A Pass - It bears repeating that we only play into the game of the Family Research Council, the American Family Association, and the rest of the anti-lgbt right if we allow them and the media to give them the title of "evangelicals" in spite of all of their distortions, lying, and general behavior which belie the religious reliefs they claim to uphold. Too many of us want to declare a war on religion itself rather than the forces who exploit religion. In 1978, Anita Bryant exploited the fear that gay men recruit children. Over 30 years later in 2016, organizations on her side of the spectrum merely altered that lie to demonize transgender women. And we stood there having to play catch up to another hurricane of lies yet again.  Where were the people speaking out on the lie of lgbts and children BEFORE the religious right pulled that card? Simplify the war, folks. It's never been about religion, but those who corrupt and exploit religious beliefs.  All of our rhetorical missiles should be aimed at them.
Posted by BlackTsunami at 9:15 AM No comments:

Ban on transgender troops to be lifted this week

As it happens, the following will take place this week. From the USA Today:

The Pentagon plans to announce the repeal of its ban on transgender service members July 1, a controversial decision that would end nearly a year of internal wrangling among the services on how to allow those troops to serve openly, according to Defense officials.

Top personnel officials plan to meet as early as Monday to finalize details of the plan, and Deputy Defense Secretary Bob Work could sign off on it by Wednesday, according to a Defense official familiar with the timetable but who spoke on condition of anonymity because officials were not authorized to speak publicly about it. Final approval would come from Defense Secretary Ash Carter, and the announcement will be on the eve of the Fourth of July weekend.

The plan would direct each branch of the armed services over a one-year period to implement new policies affecting recruiting, housing and uniforms for transgender troops, one official said.


Personally I feel that with transgender men and women already fighting for our freedoms, it is about time. However, I sincerely hope that those of us who support this will be ready to fight the possible backlash coming from the religious right and their supporters.

After battling the havoc they have been attempting to wreak with their "bathroom bills," one can only imagine the spin they are going to push on this situation. We know it will be coming, so let's not act unprepared when they start talking about "social experiments" and spinning anecdotal horror stories.
Posted by BlackTsunami at 4:58 AM No comments: