If you want to see all of the inane arguments against marriage equality wrapped up in one video, check out the above monstrosity from the Family Research Council.

It is a four minute rush of almost every anti-gay point, every anecdotal horror story, and every lame argument against marriage equality.

The video basically makes the following points, which I took the liberty to refute in parentheses.

Creates children (Because in the world of the Family Research Council, gays and lesbians cannot create children. Apparently our "parts don't fit"),

Best raises children (That is if one ignores the millions of gay households raising children in this country as well as worldwide),

Protects women (Except for the wives who get beat up by their husbands),

Civilizes men (Except for the husbands who treat their wives like punching bags),

And lowers crime, poverty, and welfare, which reduces government spending and deficits (which is really a reason to support marriage equality if you think about it).


On the other hand, marriage equality:

Validates sex partners (Because married heterosexual couples don't have sex. If you think I'm wrong, ask Brian Brown of the National Organization for Marriage, his wife and their multitude of children which they got from a cabbage patch in their backyard.),

Harms children by supposedly denying them a mother and a father (Because apparently a household with two fathers or two mothers is spooky),

Schools will subject children to "mandatory homosexual curricula" (Because apparently children in gay households don't attend public schools and if they do, who cares about letting them read reports about their families anyway. After all, they are inferior.),

Business and taxes will fund homosexual relationships (Because we all know that gays and lesbians don't own businesses and are exempt from paying taxes),

Freedom of religion and speech are gagged (Didn't they say this about lgbt-inclusive hate crimes legislation? Generally non-discrimination laws have less to do with marriage equality and more to do with fairness and taxes. An adoption agency receiving tax monies should not have the right to discriminate, regardless of which religion it serves).

This video is a colossal error on the part of the Family Research Council in that is provides arguments easier to poke through than Kleenex.

And more than that, the video comes across as just plain mean. It's dripping with a lot of naked animus towards same-sex couples and their families.

In addition, the video implies that gay couples know nothing about stability and fidelity. Maybe FRC should remember Phyllis Lyon and Del Martin, who after 55 years together were married in 2008 in California before Prop 8 was passed.

Or Edie Windor, who is seeking dignity for her over 40 year relationship with her late partner, Thea Spyer, by attempting to overturn DOMA.

And the thousands of couples in the states which passed marriage equality laws who stood in line in joyous celebration, tears, and accompanied by their children and family who were happy that finally their relationships were being treated with validity and respect.

But we all know that FRC won't do these things.  The group is too busy creating caste systems for God.

All I can say is keep it up, FRC.  If you keep showing America what you really think of same-sex couples and their families in such nakedly ugly details, we will receive marriage equality in practically no time at all.
Posted by BlackTsunami at 4:01 PM 4 comments: Links to this post 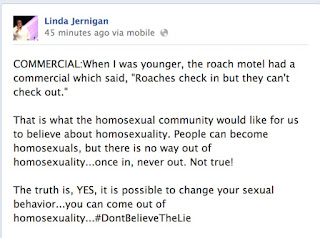 This unbelievably nasty tweet by so-called "ex-gay" activist Linda Jernigan is a prime of example of why I started this blog. Regardless of what folks like Jernigan say about them being 'Christian' and the lgbt community being bullies the opposite is true. My advice to my fellow lgbt brothers and sisters and our allies not to slam them with profanity on the Internet or anywhere else. USE these people. USE their words. SHOW people what they say. TELL people what they say. They are their own worst enemies and our best weapon for lgbt equality.

'Ex-gay' Linda Jernigan compares gay people's self-acceptance to a roach motel commercial - More details about Jernigan and that awful statement. I wonder will she be speaking at the NOM/FRC rally.

U.K.’s Top Cardinal Resigns Amid Sexual Harassment Complaints From Priests - And of course he is anti-gay. And guess how far back these allegations go?

Kansas Supreme Court Rules In Favor Of Same-Sex Adoption - I do love Kansas.

Harvey: Gay 'Deception' Going Global - Linda Harvey is yet another example of what I'm talking about. USE the liars. Their words are our weapons against them.

Posted by BlackTsunami at 9:05 AM 4 comments: Links to this post

For whatever reason, the Family Research Council has decided to resurrect the distortive story of supposedly what will happen if marriage equality is declared legal throughout the country, i.e. children will be "taught" about homosexuality.

Those who are familiar with how the right distorts this claim should know just who are the stars of the above video - two families from Massachusetts, the Parkers and the Wirthlins.

In 2005, the Wirthlins were supposedly upset that their child was read a story about a prince who marries another prince (instead of the customary stories of a young girl and her grandmother being eaten by a wolf or two children being abandoned by their parents in the forest and nearly cannibalized by a witch).

And the Parkers are really special. In 2005, the father, David Parker, was arrested for not leaving his son's school.  He claimed that he wanted some type of parental notice which would exclude his child from discussions of gay families, even if those discussions happened by accident. However, there are some (this author included) who believed that Parker had conspired with a local anti-gay group (Mass Resistance) to blow the entire incident out of proportion.

Both families sued the schools, claiming that parents had the right to opt out their children when lessons like these were taught. And they lost in front of the Supreme Court, who found that while Massachusetts did have a law allowing parents to opt their children out of lessons regarding human sexuality, learning about different families is not a lesson about human sexuality.

However, the story didn't die. The National Organization for Marriage used the Parkers and Wirthlins in its successful attempt to pass Prop 8 in California. And the families were used in ads last year in Maryland, Maine, Washington state, and Minnesota - all failing efforts by the way.

This particular video starring Parker and Wirthlins runs like a conversation with FRC head Tony Perkins. However, I think it fails. Other than the ominous music and the fake tears at the end from Parker and his wife, I think the viewer will wonder what exactly is the problem.

And therein lies the difference. It is the reason why both families lost their lawsuit in court. Learning about different families has nothing to do with human sexuality. According to the Seattle Times, who wrote about an ad featuring the Parkers and the Wirthlins last year:

In reality, in classrooms across the state and the country, teachers are already having conversations with children about different kinds of families — those of mixed race or religion, or those headed by single parents, grandparents, two moms or two dads.

And lessons about families are already part of the grade-level requirements for first-graders in Washington schools — the idea being that it helps prepare them to function as citizens in a diverse society.

But those requirements say nothing about any kind of marriage, and schools typically don't raise the subject — in deference to students who come from homes where the adults may not be married. Perhaps more importantly, there's no direct link between school curricula and same-sex-marriage laws . . .


And while the video focuses on the Parkers' children - making free use of footage showing them playing and walking with their parents  - this footage again undercuts the message FRC tries to present because the actual message it is saying is that same-sex households and the children who live in those households are somehow inferior and should not be type of respect that two-parent heterosexual households are given.

No doubt, FRC will sway the minds of those who are already in its camp, but that's a given.  If the group was attempting to win over new converts to its side, then it will fail miserably. All in all, the video is archaic and the Wirthlins and Parkers come across as mean-spirited and selfish people determined to push second-class status on families who are not like their own.

Posted by BlackTsunami at 4:58 AM 2 comments: Links to this post