You knew his voice even if you didn't know his name: 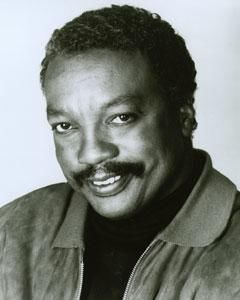 Paul Edward Winfield (May 22, 1939 – March 7, 2004) was an American television, film, and stage actor. He carved out a diverse career in film, television, theater and voiceovers by taking ground breaking roles at a time when African-American actors were rarely cast. His first major feature film role was in the 1969 film, The Lost Man starring Sidney Poitier. Winfield first became well-known to television audiences when he appeared for several years opposite Diahann Carroll on the groundbreaking television series Julia. Filmed during a high point of racial tensions in the United States, the show was unique in featuring an African-American female as the central character. He also starred as Martin Luther King, Jr. in the 1978 miniseries King.

In 1973, Winfield was nominated for the Academy Award for Best Actor for the 1972 film Sounder, and his co-star in that film, Cicely Tyson, was nominated for Best Actress. Prior to their nominations, only three other African Americans - Dorothy Dandridge, Sidney Poitier and James Earl Jones - had ever been nominated for a leading role. He also appeared, in a different role, in the 2003 Disney-produced television remake of Sounder, which was directed by Kevin Hooks, his co-star from the original. Winfield played the part of “Jim the Slave” in Huckleberry Finn (1974) which was a musical based on the novel by Mark Twain. Winfield would recall late in his career that as a young actor he had played one of the two leads in Of Mice and Men in local repertory, made up in whiteface, since a black actor playing it would have been unthinkable. Winfield also starred in the miniseries, including Scarlett, and two based on the works of novelist Alex Haley: Roots: The Next Generations and Queen: The Story of an American Family.

Winfield gained a new segment of fans for his brief but memorable roles in several science fiction TV programs and movies. He portrayed Starfleet Captain Clark Terrell of the U.S.S. Reliant, an unwilling minion of Khan Noonien Singh, in Star Trek II: The Wrath of Khan and Lt. Traxler, a friendly but crusty cop partnered with Lance Henriksen in The Terminator starring Arnold Schwarzenegger. In 1996 he was part of the 'name' ensemble cast in Tim Burton's comic homage to 1950's science fiction Mars Attacks!, playing the complacently self-satisfied Lt-Gen. Casey. On the small screen Star Trek franchise, he appeared as an alien captain who communicates in metaphor in the Star Trek: The Next Generation episode "Darmok". He also appeared in the second season Babylon 5 episode "Gropos" as General Richard Franklin, the father of regular character Dr. Stephen Franklin and on the fairy tale sitcom "The Charmings" as The Evil Queen's wise-cracking Magic Mirror.

Federal Judge Finds Same-Sex Long-Term Care Ban Unconstitutional - This just came in and it's a doozy.

Romney Foundation Gave To "Ex-Gays" - When I hear things like this, I gladly renew my "Obamabot" card.

FRC: 'Rebel Fleet Surrenders to Gay Empire' - So now Tony Perkins and the Family Research Council are attacking Star Wars over gay relationships. You know, I'm beginning to think that these folks are a couple of fries short of a Happy Meal.

Newt Gingrich Compares Gay Marriage To Paganism
- Oh Lord, it's just too easy to post a response. What the hell . . . this from a man who cheated on two wives with mistresses, one who he is know presently married to is accusing someone else of being a pagan? I think lightning has given up trying to strike Gingrich when he says stuff like that because he seems to do it all of the time.

Stacey Campfield, Tennessee Senator Behind 'Don't Say Gay' Bill, On Bullying, AIDS And Homosexual 'Glorification' - You simply HAVE to read this interview. Forget drug testing people who get government insurance. I say we give I.Q. test to prospective public office holders.

Posted by BlackTsunami at 9:08 AM 3 comments:

A 2005 article on now disgraced Atlanta pastor Eddie Long highlights a disturbing perspective to this issue of the National Organization for Marriage utilizing the black church and leaders against marriage equality that very few people are openly talking about.

When I read the recent disgusting comments of  Pastor Patrick Wooden and several other black ministers and leaders assembled by the NOM to combat marriage equality, I can't help wondering if we are seeing a retread of this theory.

While I'm certainly not making pointed accusations, I have been amazed at how quickly and convenient these coalitions between NOM and several black pastors and leaders have come together  I have also been alarmed by the rhetoric. There seems to be a degree of unrestrained glee and vindictive pleasure in not only attacking marriage equality, dehumanizing the gay community, and also - particularly in Wooden's case - going on a tangent about alleged gay sex acts.

And they do this even though they know personally members of the gay community either by family relationships or as members of their congregations.

These folks come across like well-paid hired guns.  Their tone betray a certain eagerness, like that of customers attempting to advantage of an exclusive sale at the mall or prospectors who just discovered a mountain of gold for the taking.

And in this case,  we may be talking about NOM's  mysterious funds. Remember, the organization has fought tooth and nail to conceal not only how much it has, but also just who is footing the bill. Yet NOM spends that money like water, brazenly committing  large sums of money to stop marriage equality in states like New Hampshire and Washington.

Also, I would be remiss not to mention that former NOM head Maggie Gallagher is used to receiving possibly inappropriate largesse for her "opinion." According to Media Matters, Gallagher:

received $21,500 from the Department of Health and Human Services in 2002 to conduct a briefing and write brochures and a Crisis magazine article that promoted the Bush administration's $300 million marriage initiative. She received an additional $20,000 in 2002 and 2003 to write a report ("Can Government Strengthen Marriage?") for the National Fatherhood Initiative.

In addition, Gallagher promoted  Bush administration policies in several of her independent columns. She also testified in front of Congress in favor of  "healthy marriage programs." And she did all of this without disclosing the payments she was receiving.

So Gallagher is used to such questionable practices. The question is did she bring these practices to NOM. It's not farfetched to wonder whether or not any  honorariums have been used to "motivate" prominent black ministers and leaders.

I am not the only lgbtq of color to have voiced this opinion. In the lgbtq of color community, there has been much talk and opinion-forming that these ministers and leaders who step out publicly to not only vilify marriage equality but verbally crucify the gay community in general aren't exactly doing it solely on spiritual terms.

Again, I am merely speculating. However, if, when it's all said and done, we find out that money has in fact been greasing some brown, very well manicured palms,  lgbtqs of color won't be surprised and we won't be shocked.

It's a phrase we have learned to use a lot.  Usually when it's discovered that a homophobic black pastor is actually a closeted gay.

Posted by BlackTsunami at 4:57 AM 3 comments: