The second half of this year's GLAAD awards took place Saturday and one of the best moments in my mind was when Gloria Carter, mother of rapper Jay-Z, accepted a special award for herself and her son for the song, 'Smile.'

In the song 'Smile,' Jay-Z, tells of his mother’s struggles and of his unwavering love and support for her: “Mama had four kids, but she's a lesbian. Had to pretend so long that she's a thespian. Had to hide in the closet, so she medicate. Society shame and the pain was too much to take. Cried tears of joy when you fell in love. Don't matter to me if it's a him or her. I just wanna see you smile through all the hate.”

Carter lent her voice to “Smile” during the outro, powerfully stating: “Living in the shadow. Can you imagine what kind of life it is to live? In the shadows people see you as happy and free. Because that's what you want them to see. Living two lives, happy, but not free. You live in the shadows for fear of someone hurting your family or the person you love. The world is changing and they say it's time to be free. But you live with the fear of just being me. Living in the shadow feels like the safe place to be. No harm for them, no harm for me. But life is short, and it's time to be free. Love who you love, because life isn't guaranteed. Smile.”


At the GLAAD awards, Ms. Carter spoke eloquently of love and acceptance. That enough was awesome, but the fact that it came from an older lesbian of color made the moment much better because they are the voices that we don't often hear from, but definitely need to.
Posted by BlackTsunami at 5:12 PM No comments: 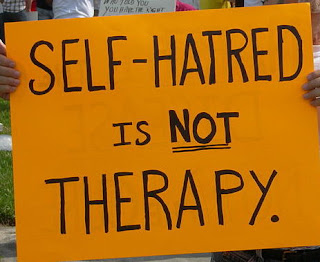 ‘Ex-gays’ humiliated in DC when no one showed up for their big rally - For years, those who practice "ex-gay" therapy said there were hundreds of them and then we would say "well then why don't y'all have a march to prove it." They just did. It didn't go well for them. My heart goes out to those who desperately believe that they can somehow "cure" themselves. But we have to press the the point that the main point of so-called ex-gay therapy is not to cure people, but to undermine the LGBTQ community, our equality, and safety.

‘Dying because of hypocrisy’: Ex-megachurch pastor says Trump-loving evangelicals are digging their own graves - They ain't digging fast enough as far as I'm concerned.

America’s Only Openly Transgender Mayor Has Been Voted Out of Office - You win one, you lose one. And vice versa.
Posted by BlackTsunami at 9:16 AM No comments: