As to be expected, the Family Research Council posted a Washington Update celebrating Trump's newest attempt to ban transgender troops from serving in the military. And of course, the update is a piece of deluded trip which deliberately obscured that the fact that FRC president Tony Perkins was one of the folks who played a part in drafting this monstrosity of a policy.

Also, FRC seems to be deluding itself in terms of what is known about this newest ban. You can read the entire thing, but here is the meat of FRC's distortion:

Under the memo released Friday, both Defense Secretary Jim Mattis and Homeland Security Secretary Kirstjen Nielson signed their names to a 40-page document that will help free our military from the radical grip of the Obama years. Building on the GOP platform he swore to uphold, the president took a strong and decisive step away from the uncertainty that Ash Carter injected into the military when he tore down the barriers to transgender service. "Military standards are high for a reason," Secretary Mattis wrote in the report, "the trauma of war, which all service members must be prepared to face, demands physical, mental, and moral standards that will give all service members the greatest chance to survive their ordeal with their bodies, minds, and moral character intact. The Department would be negligent to sacrifice those standards for any cause."

In the new policy, people who identify as transgender, but who haven't been formally diagnosed with "gender dysphoria" and have not undergone a "gender transition" are free to serve or join the military -- with one catch: they must serve as their biological sex. On the other hand, anyone with a history or diagnosis of gender dysphoria (which the Pentagon defines as someone who requires "substantial medical treatment, including through medical drugs or surgery") are barred from the military, except under limited circumstances. While there are certain caveats, including when a person entered the military and in what state of transition, the administration's decision sends a powerful message that the days of reckless social engineering in the military are over.

After digging into the science and the instability Obama's policy created, Mattis and his team were more convinced than ever that letting this type of gender chaos into the military presents a "considerable risk" to its "effectiveness and lethality." And they had more than enough evidence to back it up. The memo does a great job dismantling the flawed RAND study that former Secretary Ash Carter used to prop up Obama's move. DOD insists that RAND "mischaracterizes or overstates the reports on which it rests its conclusions" (p. 39). "In fact," officials write, "the RAND study itself repeatedly emphasized the lack of quality data on these issues and qualified its conclusions accordingly" -- a fact the last administration never bothered to mention.

The Defense Department also takes Carter's regime to task, explaining that they found several instances where "standards were adjusted or relaxed to accommodate service by transgender persons" (p. 19) -- which is somewhat ironic, given the Left's insistence on "equality." To bend the rules and justify their decision, Carter's team had to ignore stacks of research from their own ranks. For example, people who suffer from "gender dysphoria" in the military are eight times more likely to commit suicide (p. 21) and nine times more likely to have negative "mental health encounters." And while the taxpayer-funded treatments go on, their service peers are the ones left picking up the slack. "To access recruits with higher rates of anticipated unavailability for deployment thrusts a heavier burden on those who would deploy more often" (p. 27). While Democrats like Chuck Schumer (D-N.Y.) fire off angry tweets, arguing that the president's position "cuts directly across the drive for equality," DOD points out just how mistaken they are. If any policy was unfair, it was Obama's! As Defense officials point out, if a service member had to have genital reconstruction surgery because of a traumatic combat injury, they would have been disqualified from military service without a waiver. But if someone decided to change sexes because they were struggling with their identity, their waiver would be granted (p. 28). That's how twisted Obama's agenda was -- rewarding service members with mental struggles on one hand and punishing hurting heroes on the other.

As we all know, the memo in question was NOT developed by Mattis or the Department of Defense.  Mattis was actually for transgender men and women serving in the military. He advocated this position in February. What changed?

Anti-LGBTQ Activists Reportedly Helped Guide New Pentagon Policy On Trans Service Members - Just in case you didn't know this, you do now and it will be shouted until it is drilled into the heads of the LGBTQ community. Don't let the homophobes write the policies which govern our lives. Tell each other and contact your congressional leaders.

Trump’s panel of “experts” on trans military ban included anti-LGBTQ hate groups and extremists - With more detail on who these folks are and why this practice is dangerous.

Joni Ernst says she supports transgender people serving in the military - Never thought I would ever agree with Joni Ernst but her statement says it all.

Meanwhile, the Family Research Council commented by sending this laughably ridiculous tweet by Congressman Andy Harris, who just happens to be an enemy of LGBTQ equality: 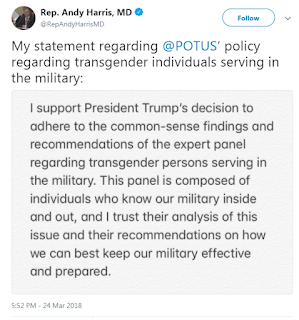 And another tweet conveniently omitting how its president Tony Perkins helped to develop the ban via refuted junk science: 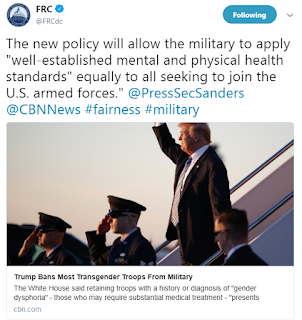 You are going to have to do better than that, FRC