There is a line from Shakespeare's King Lear which I repeat at times:

"To willful men, the injuries they procure must be their own schoolmasters."

What it means is that if a man is so stubborn that he will not change a disastrous course, well then he must learn from the mistake by the negative results of his actions.  Indiana Gov. Mike Pence is one such man.

After the huge debacle last year when he signed a vicious anti-gay bill into law (under the guise of religious freedom), one would think that Pence would at least have learned from it. One would think that he wouldn't want to go through all of that national embarrassment again.

For a brief moment during Indiana Gov. Mike Pence's State of the State Address on Tuesday, it sounded as though he might have learned his lesson from the state and national outcry over his decision to sign an anti-LGBT “religious freedom” law last year.

It sounded as though, after 10 months of studying the issue, Pence would finally heed the calls of Democrats, some business-minded Republicans, LGBT advocates and hundreds of the state’s employers, by endorsing a statewide law prohibiting discrimination based on sexual orientation and gender identity.

"Our state Constitution declares that all people are created equal, and I believe that no one should be harassed or mistreated because of who they are, who they love, or what they believe," Pence said near the end of his widely anticipated speech. "We cherish the dignity and worth of all our citizens. Here in Indiana, we are an open and welcoming state that welcomes anyone, and anyone that doesn’t know that doesn’t know Indiana."

Then, things took a dramatic turn for the worse.

"Hoosiers also cherish faith, and the freedom to live out their faith in their daily lives," Pence added. "Whether you work in a church or a synagogue or a temple or a mosque, religion brings meaning to the daily lives of millions of Hoosiers and no one should ever fear persecution because of their deeply held religious beliefs."


And of course folks aren't happy. According to Yahoo:

"We were looking for a moment of leadership, and what we got is a shoulder shrug," said group spokesman Peter Hanscom, who said Pence's conciliatory words won't stop discrimination against gay people in employment, housing and public accommodation.

Pence's stance is ridiculous. He is yet another politician who places lgbt equality and religious beliefs in opposing camps while knowing fully that this notion comes from anti-gay industry talking heads masquerading as voices of faith.

Apparently he has learned nothing from the last go round.  I have a feeling that he will learn this time. So well in fact that he will know it in his sleep. That is if he doesn't already.

'59 reasons why the fight for lgbt equality is not over' & other Wed. midday news briefs

59 Anti-LGBT Bills Are Active Nationwide - Fifty-nine reasons to stop pussyfooting and start taking religious right groups more seriously than we are. These bills are coming from someone somewhere who is getting paid big money to cause all of this havoc. We need to recognize the main enemy of lgbt equality and it's NOT religion.


GOP Lawmaker Moves To Ban Same-Sex Parents From Fostering Children With 'Family Structure' Proposal - Even AFTER the ruckus and controversy about discriminating against same-sex couples, some in Kansas are pushing this mess. We can't let our guard down for one minute.

Creepy Virginia Toilet Proposal Could Require Genital Inspections, Critics Fear - And in Virginia, folks seem to be so scared of fictional trangender "predators" that they may be willing to expose their children to actual predators.

Obama's State Of The Union Speeches Show His Dedication To LGBT Rights - Yes, in spite of what some have said, Obama is committed to lgbt equality. A good question is what are we going to do after he is no longer president to continue to ensure our equality.

Tony Perkins' Selective Posturing on Religious Liberty - When it comes to religious liberty, Tony Perkins of the Family Research Council is a huge hypocrite.
Posted by BlackTsunami at 9:04 AM No comments:

Dear Kim Davis, you are being exploited!!

I don't know you and I don't want to know you and frankly folks are tired of you. However, a lot of us do respect your beliefs, just not the way you choose to push them. So I say this as a concerned person. The people handling you and pushing you to the public don't care about you. They are using you to harm marriage equality. They are exploiting you to garner attention and pity. Think I am wrong?

Then ask yourself this. If they bent over backwards to garner you an invitation to the State of the Union, then why didn't they advise you that being attired like a honkytonk hitchy mama from hell wasn't exactly the best thing to do? Not ragging on your physical appearance and all, but you make $80,000 a year. So girlfriend, why: 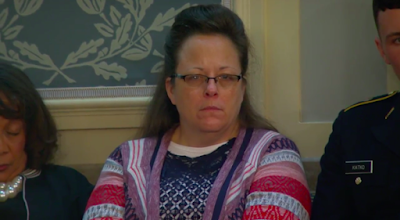 Just something to think about.
Posted by BlackTsunami at 4:54 AM 3 comments: