Trump told his people to break the law in separating immigrant families but he is still a good Christian. Right?

In the age of Trump in the White House, we are sadly learning that to right-wing evangelicals - especially their leaders - religion nothing more than as a weapon to undermine LGBTQ equality and safety and to serve as an excuse for the excesses of a horrible leader.

Presidential nominee Pete Buttigieg has raised many eyebrows with his calling out of the hypocrisy of Trump and his evangelical conservative supporters. And he is pissing off the right people:


And then there is the fake news "Christian" publication One News Now:

It is widely contested that evangelicals were the main demographic group that put Trump in the White House, and most have justified their support for him by pointing to his vows to champion biblical principles while in office, while recognizing that the president is a sinner – like all Christians – with a repentant heart to do what is right before God.

. . . Evangelical leaders, including Rev. Franklin Graham, Dr. James Dobson and Liberty University President Jerry Falwell, Jr., have often come under attack by the leftist media for supporting the president – as reporters typically either resurface actions the president has admitted and apologized for or recite anti-Trump allegations that have been vehemently challenged as false. 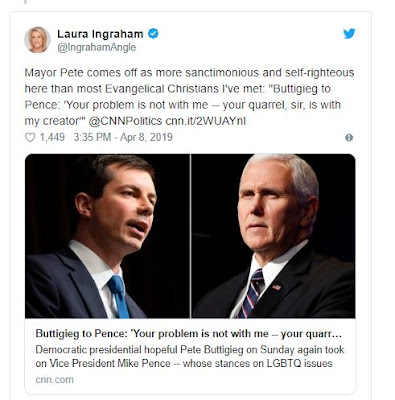 It's rather ironic, but also fitting that on the same day in which these folks are attacking Buttigieg for calling out Trump and the hypocrisy of  his Christian evangelicals supporters that we find out Trump was ordering border patrol agents to break the law and lie to judges, pushing hard to resume forced separations of immigrant children from their parents at the border, and firing his Secretary of Homeland Defense when she tried to prevent him from breaking the law.

Read more »
Posted by BlackTsunami at 5:20 PM No comments: 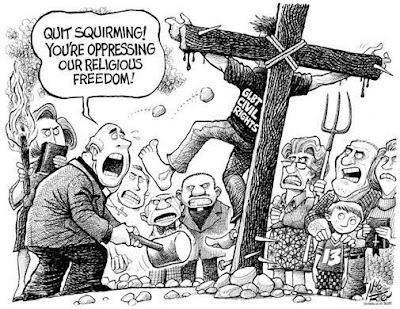 The religious right thinks that Europe is now fertile ground for its anti-LGBTQ agenda - Using the same tactics they are using in America. The same lies. The same dog whistles.


Pete Buttigieg To Mike Pence: Marrying My Husband ‘Moved Me Closer To God’ - Being an LGBTQ is not opposite of being religious or having any type of faith. I like how Buttigieg is pushing that fact.

Bulgarian politician threatens to use “illegal means” to stop an LGBTQ photography exhibition - Like I said- the struggle is real and it is universal.

More companies boycott Brunei over anti-gay laws - Speaking of which.

‘It’s dangerous to go out now’: young, gay and scared in Brunei - Goes without saying.
Posted by BlackTsunami at 8:48 AM No comments: