I present you with something short and sweet which demonstrates how members of the anti-LGBTQ industry distort research to denigrate and demonize our community.

The anti-LGBTQ publication LifeSite News (which blocked me from commenting on its site years ago) posted the following tweet about a July article on its site:

This sounds terrible and it is terrible . . . the way LifeSite News shamelessly lied to create a hideous factoid about gay male couples. And what's more pathetic is that the first two paragraphs of the article  exposes this distortion:

Nearly half of men in same-sex relationships have been abused by their partner in some way, according to a new study published in the American Journal of Men's Health.

The study found that among 160 homosexual male couples, 46% of the men reported “some form of intimate partner abuse” in just the past year, HealthDay News reports. The abuse took forms such as physical violence, sexual violence, emotional abuse, and controlling behavior.

Also, even though LifeSite News attempts to paint the study as proof that gay couples is a negative concept, the article continues to contradict the site's intent. The study's authors clearly say that it is outside negative influences which may contribute to the violence:

To explain the discrepancy between straight and gay abuse, the study purported to show an “important connection between internalized homophobia and violence reporting among couples.” Stephenson also noted that health care providers tended not to ask male couples about domestic abuse. It also asserted that violence was “more common among partners who had experienced homophobic violence and who had traditionally hegemonic views of masculinity that they had difficulty negotiating.”

“A gay man who’s struggling with his identity might lash out at his partner with physical or emotional abuse as a stress response behavior,” a University of Michigan news release about the study explained, “similar to heterosexual couples, where an unemployed man lashes out at his female partner because he feels inadequate.”


Nice try LifeSite News but you get an "F" for effort. And that's only because I can't think of a lower grade.

Editor's note - This is the original study  which LifeSite News distorted.
Posted by BlackTsunami at 5:05 PM No comments:

''Taught to hate myself': How ex-gay therapy is thriving in SC' & other Wed midday news briefs 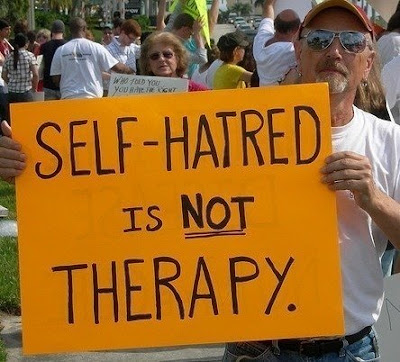 'Taught to hate myself’: How gay conversion therapy in SC is thriving - How the fraud of 'ex-gay' therapy is thriving in my state of South Carolina. Kudos to the Post and Courier for a wonderful article.

Texas Governor Says “Bathroom Bills” Are No Longer on His Agenda. Should You Believe Him? - Should we believe him? Hell no simply as a matter of precaution.

Family Research Council applauds Trump's new visa policy because, quite simply, it hurts gays - Repost from last night. I guess with Trump in power, FRC and groups like it don't have to pretend to not hate the LGBTQ community.

Evangelical University Lifts Ban On Same-Sex Couples, Then Reinstates It - Make up your minds, folks.

The Radical Friendship Of Lorraine Hansberry And James Baldwin -
Two giants of Black History and both were LGBTQ.
Posted by BlackTsunami at 9:08 AM No comments: