The Family Research Council is presently pushing a strange story of so-called religious persecution in its attempt to create a phony moral panic about the issue:

Cadets at the United States Air Force Academy should expect to be trained in dealing with fear -- fear of surface-to-air missiles, anti-aircraft fire, or falling into enemy hands. Unfortunately at today's Air Force Academy, cadets must also deal with fear of expressing their faith. Recently, a cadet wrote a Bible verse on the dry-erase board on the door to his dorm room. Apparently, the Apostle Paul's words to the Galatians that "I have been crucified with Christ, and I no longer live, but Christ lives in me..." (Gal. 2:20) were a little too much for someone to tolerate, and the verse was removed after an anti-Christian activist group complained to the Superintendent of the Academy.

This incident reflects a culture of suppression that is being instilled among some of America's best young warriors. When religious expression is whitewashed because of the complaints of a hyper-sensitive few, the Academy develops a culture of fear when it should be developing warriors. If cadets are taught to be afraid of Bible verses, how will they respond against terrorists who are willing to die for their cause? Our U.S. Air Force Academy cadets should be taught how to intercept the enemy, not how to tiptoe around the hyper-sensitive complainants. Join me in standing against this culture of fear at the U.S. Air Force Academy and stand for the cadets by signing the petition to Superintendent Lt. Gen. Michelle Johnson to protect the religious expression of Air Force Academy cadets.


There's just one problem with that story.  It's not true and strangely enough, it's the American Family Association's One News Now which reveals the truth:

As reported Friday, attorneys with Liberty Institute flew to Colorado Springs following the news that an Air Force Academy cadet had removed a Bible verse from his whiteboard outside his dorm room, apparently after anti-Christian zealot Mikey Weinstein of the Military Religious Freedom Foundation complained about it. But Liberty Institute learned that the unidentified cadet had voluntarily removed the verse and it had nothing to do with Weinstein's complaint.


In FRC's defense, the organization's story is dated on Friday, the same day in which the incident took place. However, the post continues to stay up today unchanged even after One News Now's correction.

BarbWire: Gay Rights 'Has Its Roots In Hell,' Championed By 'Godless Human Minions Of Satan' - Well I've been called many things, but this one is a first. With rhetoric like this, how can the anti-gay forces fear losing this so-called culture war. (eyes rolling)

The next anti-LGBT export target: Peru - Uganda, Jamaica, Russia, and now Peru. Do you notice an ugly trend or is it just me?

Catholic Leader Resigns From Austin Ruse's Group Following Remarks About Shooting Professors - I am so loving this entire story. 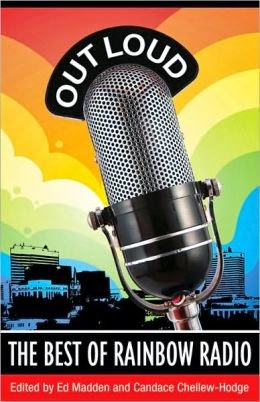 By now, you already know the controversy regarding the SC legislators punishing colleges for assigning two gay-themed books for students.  The new state budget deducts $70,000 collectively from the College of Charleston and the University of South Carolina-Upstate. The amount adds up to the how much the two colleges spent on the gay-themed books. Rep Garry Smith is leading the charge because he claims the books, Fun Home and Out Loud: Rainbow Radio doesn't represent SC community values. He and other supporters claim in particular that Fun Home is pornographic.

I am calling bull to Rep. Smith's charges.

I haven't read Fun Home, but I contributed to the latter book, Out Loud: The Best of Rainbow Radio,  and there is nothing pornographic in it. The two books do have a similarity, however. They talk freely about lgbts, i.e. the gay community.

Rep. Smith and his allies claim that they are merely protecting students from pornography.  But I have a serious problem believing this. Situations like this have played out so many times that we know the score. Smith and supporters apparently took offense to the colleges requiring students to read these books, so they scoured one of the books, in this case Fun Home, for what seems like a few "dirty passages" and, without taking note of the context of the passages, have based their entire case on them.

If you don't know what I'm getting at, then the following tweet from a SC religious right group, The Palmetto Family Council, should give you some indication:

Rep Garry Smith stands up for families and wins in SC House today-Here is the vote board on Rep. Garry Smith's... http://t.co/q336rPUoIY
— Palmetto Family (@palmettofamily) March 10, 2014

The group was celebrating the passage of the budget via the House of Representatives, including the $70,000 deduction. But its gloating is much more extensive  if you look past the surface.

This isn't about protecting students or community values. Rather, it's about what Rep Smith originally claimed before he began pushing the more politically advantageous angle of stopping the spread of pornography, i.e the supposed "indoctrination of students into the so-called homosexual agenda." (cue the spooky and dramatic music).

You see, this is the rub of the situation.  Rep. Smith (and others) seem to have a bee in their bonnets that these books actually recognize and acknowledge lgbts and especially about same-sex families. And these books don't condemn  them either.

Read more »
Posted by BlackTsunami at 5:00 AM 3 comments: