Why are the Republican presidential candidates embracing a vicious hatemonger? 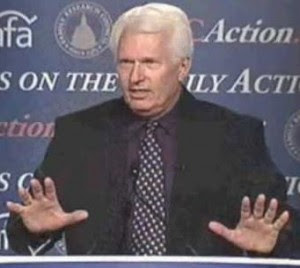 I've said it once and I will say it again:

Singlehandedly, Bryan Fischer is confirming all of what the Southern Poverty Law Center has said about the American Family Association being a hate group.

One has to wonder whether or not he is holding some good information over the head of AFA head Donald Wildmon. It's the only explanation I can garner about why the organization continues to allow him to speak for them. So far, Fischer has:


And that's not even counting all of the ugly things he has said about lgbts, particularly his comment about us being associated with Hitler and the Nazis:

So Hitler himself was an active homosexual. And some people wonder, didn't the Germans, didn't the Nazis, persecute homosexuals? And it is true they did; they persecuted effeminate homosexuals. But Hitler recruited around him homosexuals to make up his Stormtroopers, they were his enforcers, they were his thugs. And Hitler discovered that he could not get straight soldiers to be savage and brutal and vicious enough to carry out his orders, but that homosexual solders basically had no limits and the savagery and brutality they were willing to inflict on whomever Hitler sent them after. So he surrounded himself, virtually all of the Stormtroopers, the Browshirts, were male homosexuals.

But apparently there is one group which Fischer has failed to call out and offend - African-Americans. That is until today.

According to Raw Story, he said the following:


Fischer added that welfare had destroyed the African-American family by providing incentives for fornication instead of marriage. "It’s no wonder we are now awash in the disastrous social consequences of people who rut like rabbits," he wrote.

"Welfare has destroyed the African-American family by telling young black women that husbands and fathers are unnecessary and obsolete. Welfare has subsidized illegitimacy by offering financial rewards to women who have more children out of wedlock."

Fischer's comments would be hilarious except for the fact that prospective Republican presidential candidates such as Newt Gingrich, Mike Huckabee, Tim Pawlenty, Haley Barbour, and Michele Bachmann has appeared on his radio program.

I think certain questions need to be asked. Not to Fischer of course because that would be like trying to get a straight answer from a corpse.

Questions need to be asked of Gingrich, Huckabee, Pawlenty, Barbour, and Bachmann. How do they feel that they are the right individuals to lead this country if they rub shoulders with such a vindictive hate monger?

Posted by BlackTsunami at 3:52 PM No comments:

Wal-Mart Harassment Policy upheld in case of gay harassment - Religious beliefs do not protect you if you harass your co-workers. God bless America!

By 'The Hispanic Church,' NOM really means The Hispanic Ministerial Association of Rhode Island - The National Organization for Marriage caught fudging the numbers of just how much Hispanic support they have in Rhode Island. I personally wouldn't believe the group if they said water is wet.

RNC Attacks Obama Over Gay Issues - Okay. And these people want to win?

Students who were denied gay-straight club say they’re being bullied - This is not good. Stay strong. You will win in the end.

Religious leaders revive bid to pass transgender bill - I hope that they are successful.

Religious right groups such as the Family Research Council and the National Organization for Marriage are always so quick to seize upon incidents in order to claim that lgbt equality is causing people to lose their rights or get threatened.

But as we have seen in the cases of Peter Vadala, Crystal Dixon, Patricia Mauceri, Jennifer Keeton,  Julea Ward, and the newest case, Marcia Walden -these folks either got fired or got into trouble because they didn't adhere to rules regarding professional conduct and then chose to make the controversy into a religion vs. homosexuality issue.

On the other hand, here is a real issue involving a lesbian couple who got a bunch of venomous verbal attacks simply because they were plaintiffs in the Proposition 8 trial. From The Advocate:

Two plaintiffs in the high-profile Proposition 8 case were subjected to multiple vitriolic and antigay voice mails during the 2010 trial from a San Francisco man who was later convicted of making threatening telephone calls to then–House speaker Nancy Pelosi.

According to a 2010 Berkeley, Calif., police department report, Sandra Stier, who with her partner, Kristin Perry, filed suit against Prop. 8 in 2009 along with a Burbank gay male couple, received about 13 harassing messages at their Berkeley home during a two-day period in January at the end of the trial’s testimony phase.

Using an unlisted cell phone with a Newport News, Va., area number, the caller made repeated biblical references to homosexuality as well as antigay slurs. Many of the calls were made in the middle of the night or early-morning hours. Listen to the voice mails below.

A former law enforcement agent who provided audio recordings of the voice mails to The Advocate said the phone number used by the caller matched one revealed in a federal grand jury subpoena involving the investigation of Gregory Lee Giusti, 49. Giusti made at least 48 calls in February and March of 2010 to Pelosi, including calls to her Washington, D.C., residence, one of her Northern California residences, her San Francisco district office, and her husband’s San Francisco office. Giusti used a Magic Jack device in an attempt to conceal the origin of the calls, according to a 2010 affidavit by FBI supervisory special agent Bryan S. Smith.

Now I'm certainly not blaming NOM for FRC for this man's words entirely, but to on the other hand, one would have to be blind to ignore even the smallest link between the rhetoric these organizations spew and the bile flowing from this man's mouth.

Posted by BlackTsunami at 5:10 AM No comments: