A gay Latino attends a press conference of racist Trump supporters while filming it . . .

Stop me if you hear this joke.

A Latino gay guy goes to an right-wing racist press conference of Trump supporters while filming it. . .

Carlos Maza of Media Matters does what I could never do:

On September 9, three of the country’s most notorious white nationalists held a press conference in Washington, D.C., titled “What Is The Alt-Right?” The event, organized by the white nationalist “think tank” the National Policy Institute (NPI), came in response to growing media interest in the “alt-right” movement. Republican presidential candidate Donald Trump has helped mainstream the racist movement, including by hiring Breitbart News executive chairman Stephen Bannon as his campaign CEO. As the Southern Poverty Law Center has noted, under Bannon’s leadership, Breitbart has “has been openly promoting the core issues of the Alt-Right, introducing these racist ideas to its readership.”

This Gay Man Is Fighting For LGBT Rights In The South And Beyond - Just in case you didn't see it, an interview in The Huffington Post with yours truly.

This Dad “Hacked His Wife’s Facebook” To Respond To An Anti-Gay Politician - Now THIS is what you call "reading."

Pat McCrory’s Staff Plants Softball Questions For Governor At Event - McCrory has problems . .
Posted by BlackTsunami at 9:25 AM 1 comment:

NC Gov. Pat McCrory is in the middle of a firestorm over HB2. Businesses are boycotting the state and they are now joined by the NBA, NCAA, and the ACC. Of course this is getting many folks in the state, including legislators who voted for HB2 talking about a repeal.

McCrory seems to be remaining firm in support of that ridiculous law. And backing him up is the Rev. Franklin Graham via twitter and Facebook, where he continues to push inaccuracies about HB2 and the transgender community: 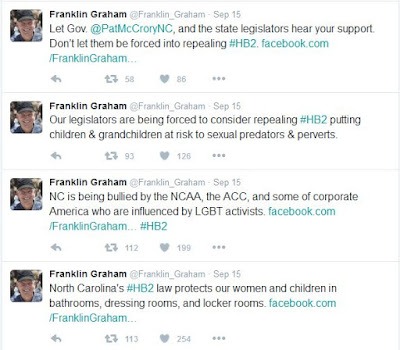 The momentum of public opinion seems to no longer embrace these lies. McCrory would do himself a favor if he stopped listening to this lessening minority of fear. But apparently he wants to do things the hard way.
Posted by BlackTsunami at 4:59 AM 2 comments: