One of the administrators of the Truth4Time site, Michael Brown has taken it upon himself to make an attempt to refute the article written about the group in the Huffington Post. I personally think that he was being disingenuous. Allow me to break down his comments:


Michael Brown - 1) “Shortly after he wrote about the secret Facebook group, named "Truth4Time," he reported that the group disbanded.” That is completely false. The group did not disband, nor was that a subject of consideration for the group.

My source, a member of the group said differently. However, it is possible that the group felt the need to start up again.

Michael Brown - 2) It is stated that “the group included a ‘member of a state legislature,’ a ‘Fox News pundit,’ and various other unnamed prominent individuals,” which were then named, including Maggie Gallagher of the National Organization of Marriage and Dr. Keith Ablow of Fox News. This is actually quite misleading, since access to the site was given to people like Maggie and Keith, but to my knowledge they were never active on the site and might not even know of its existence.

Brown is being extremely deceptive here. All of these folks are listed on the membership roster. If this is a secret group, then wouldn't access be given to members?  Also Brown is not clear on whether or not they knew of its existence. While it is true that people can be added to groups without their say-so, they are generally made aware of their addition. So the question is why didn't they remove themselves from the group. It's a question they need to answer.


Michael Brown - 3) According to Signorile, “McEwen said that tactics the group planned to employ included ‘ganging up’ on ‘pro-gay pages with comments and flagging Facebook pro-gay pages multiple times with the intent on getting these pages removed.’” This is patently false, from beginning to end. The group was actually formed with the intent of doing the exact opposite of this. Some of our conservative colleagues documented for us attempts by some gay activists to have their Facebook pages removed by constantly reporting them to Facebook as containing “hate speech” or “hateful” content. One of the goals of our group was to be alerted to tactics like this so we could report this to Facebook in the interest of fairness and so as to combat cyber-bullying.

I don't even need to give a written refutation of this. Brown omitted this mission statement from the site's leader: 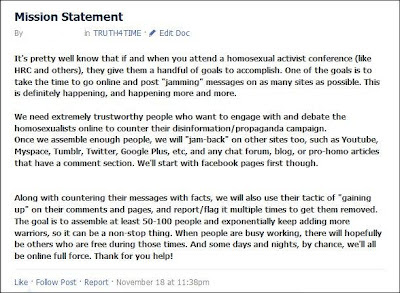 Seems to me that Brown is being "patently deceptive" with what he is omitting.

Michael Brown - 4) Lastly, McEwen claimed that one former member of the group (who somehow was approved for acceptance) was “especially disturbed by a plan, whether it will come to fruition or not, to bombard physicians and school boards with negative and distorted information about the gay community.” This again is as misleading as it is untrue. There was no such plan, but there was always encouragement to raise the issue of the health risks of homosexual activity, as reported by the Centers for Disease Control and the like, whenever relevant in different discussions and blogs.

Brown calls it "encouragement," I call it a "plan." Read and decide for yourself: 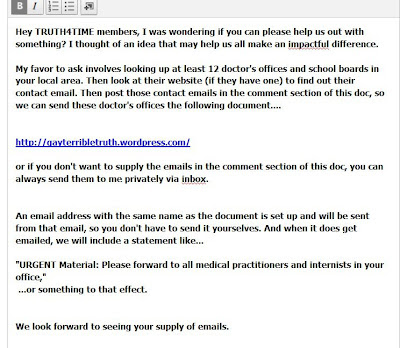 And if I can nitpick just a bit, Brown makes it seem that the lgbt orientation is the cause for negative gay health choices, when in fact the CDC has said that racism, poverty, and homophobia play a big role.

Poor Michael. Other members of this group - with the exception of Peter LaBarbera via sad tweets - have opted to keep quiet about this controversy.

There is an old saying which speaks so aptly here to Brown's sad attempt to refute my information:

It is better to be thought of as a fool than to open your mouth and remove all doubt.

Facebook Group, Included NOM Co-Founder, Fox News Pundit And More - Lord give me strength. I just made the top story of the Huffington Post.

Ministers Betray the Black Community by Defending Race-Baiting Group - Well this WAS going to be the leading post in today's news briefs. It is something I wrote then forgot about. The basic gist - any black minister who supports the exploitation of his/her people deserves a scathing so vicious that it would take the paint off of walls. I hope I did a good job here.

Video: Newt hopes he can impart his electoral karma onto North Carolina; me too - So Newt Gingrich, a man who has been married three times is giving advice on protecting marriage? Puleazeeee!

Missouri Don’t Say Gay Bill Sponsor: ‘There Is No Need To Talk About Billy Wanting To Marry A Goat’ - I've been known to date some "dogs" but I have never felt the inclination to marry a goat. LOL

Posted by BlackTsunami at 9:23 AM 3 comments:

Some members of the religious right are no doubt raising hell amongst themselves about my Truth4Time, yesterday, looking at each other with heightened suspicion.

Like I actually care that these folks are angry. To paraphrase one of my favorite television show characters, their anger only makes the lgbtq community stronger. And I recommend that folks not get discouraged at these groups and the phony facts they attempt to throw out. The gist of the matter is that my post yesterday gave some of these folks a deserved kick where it counts.  And if any of them are reading this post, please be aware that your plans are being watched.

Now - cheap plug time - if you haven't heard the interview I had yesterday with Michelangelo Signorile in regards to the secret Facebook group Truth4Time, please take a listen again:

It's interestingly funny how I pivoted from not wanting to reveal the names of the people in that group to naming quite a few. Hopefully that ends the debate which was started on whether or not some of these people should have been named and also quells notions from a bitter blogger (who shall remain nameless) that I made up the entire thing.

Some of these allies weren't exactly happy with me either. I hope they are now.

Unfortunately, some of my friends are deaf and therefore could not hear the video, so allow me to break down the juicy parts that some of you have been wanting to know. The names I listed include:

These are the people listed as members of this organization. Now how they got involved the group or whether they are fully involved in the group is for them to say. That's not my problem.

But knowing these folks, they will probably ignore this controversy, hoping that it goes away.

That's all very well, but it's like I said before. There are members of the lgbtq community more savvy than those in the past. And while we don't march or shout, we plot and plan because we have to. Our very survival depends upon it.

And to the religious right - your plans are being watched.