UPDATE - I call it hypocrisy but whatever it is, it worked for the anti-gay right. World Vision has reversed its decision.

When World Vision, a Christian ministry, made the recent decision to employ Christians married in gay relationships, I knew the blow back would be hostile amongst religious right groups.

But from how some anti-gay groups are describing this decision, one would think God is going to unleash all of the 10 plagues of Egypt at the same time: 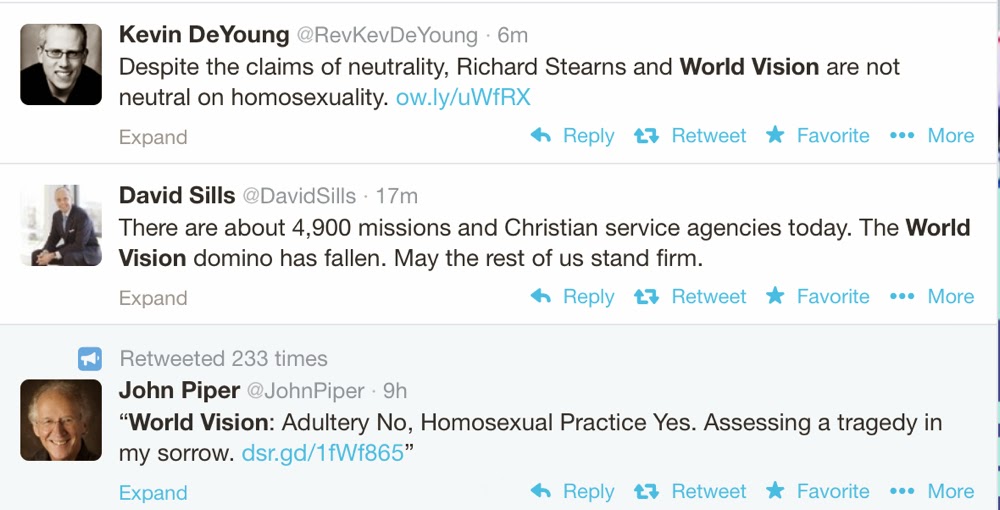 Last, but certainly not least, Tony Perkins of the Family Research Council:

This isn't neutrality -- it's open rebellion. If we're going to follow Christ, we need to follow Him in every aspect -- including the biblical design for the family. And while there are several areas of Scripture that are open to interpretation, this isn't one of them. "Children," writes The Gospel Coalition's Trevin Wax, "are the ones who suffer when organizations like World Vision, under the guise of neutrality, adopt policies that enshrine a false definition of marriage in the very statement that says no position will be taken.


I have one question. Wasn't World Vision's decision an act of "religious liberty?" Wasn't it an act of a religious body being able to make its own decision without being cajoled, but according to its conscience and deeply held personal beliefs?

So what's with all of the cries of doom and cataclysm? What's with the weeping and gnashing of teeth? Don't get me wrong. I can understand how some folks may disagree with World Vision's decision, but after all of the fuss they created in attempting to enshrine anti-gay discrimination under the banner of "religious liberty," anti-gay groups and spokespeople are coming across as highly hypocritical.

The least they could have done was to say "we don't agree with this but in the spirit of religious liberty, we respect the decision of World Vision."

Instead, we get this talk of Satan, and the "mark of the beast," and inferences of open rebellion against 'God's plan."

Of course that last inference has always been hilarious to me because every time I hear anti-gay personalities speaking it, I take to scanning the Bible. To this day, I have yet to find a passage saying that God has appointed them as his moral squad.

What this ridiculous non-controversy proves is something we always knew. Anti-gay groups don't really believe in religious liberty. They believe in religious liberty for themselves and those who believe as they do, but with that belief comes another belief that their interpretations of Scriptures and the decisions they make in accordance to these interpretations are the only ones which matter.

That has nothing to do with religious liberty but everything to do with being selfish and self-righteous - two very un-Christian qualities to possess.
Posted by BlackTsunami at 9:34 PM 3 comments:

How to answer an insulting statement on marriage equality

I don't know what program this is, but it sounds like something from Great Britain. At any rate, the older woman claims, in an insulting tone, about how marriage equality will hijack her marriage. While it's easy to allow yourself to get angry when people make statements like this, remember that when folks like Brian Brown says things like this, they want you to get angry so they can play the victim. We should remember that our answers need to be not out of anger, but firmly committed to our relationships and common sense, just like the young lady debating her and a member of the audience:

Posted by BlackTsunami at 5:13 PM 4 comments:

Due to a family funeral today, there will be no midday news briefs. Hopefully these news briefs will tide you over:


Credit Where Due: Todd Starnes Ends Interview With End Times Fanatic Rick Wiles - File this under bizarre. Anti-gay writer Todd Starnes meets another anti-gay personality who scares even HIM. Two amazing things happen during this interview. Starnes abruptly ends the interview and I give him props for the dignity he handles the situation. I suspect that second thing won't be happening any time again soon.

World Vision, One Of Country’s Largest Christian Charities, Will Now Hire Married Gay Christians - Well this ought to be interesting.

Why Affirming Bisexuality Is A Public Health Concern - Because bisexuals exist and have to deal with a huge amount of stereotypes, particularly involving promiscuity.
Posted by BlackTsunami at 4:49 AM No comments: