Last week, I hinted on a new project about the religious right's demonization of the LGBTQ community. At the time, I wasn't ready to give complete details. However, right now, I am ready to drop a small hint as to what that project will be.

It's a simple hint because the project (provisionally named HELL) is a simple, but effective one which I hope will bring a much needed degree of seriousness and examination of history when it comes to how anti-LGBTQ groups and personalities have spent countless years dehumanizing us.

There has been lots said about the initial losses we suffered in our fight for marriage equality; the constant defeats we endured in referendum after referendum, which culminated in the shocking loss regarding Prop 8 in 2008 ; the loss which, for the time being, banned marriage equality in the state of California. Supposedly we were supposed to win that won, so when we loss, fingers were pointed, ugly things were said, and unspoken divisions were put out in the open.

However, the Prop 8 loss shared a similarity (which for the purpose of my upcoming project) like so many other referendum fights. Unfortunately, it was a similarity which very few brought up.

In the future, it shall be.  But for now, enjoy the truth of the meme (click on it if you want to enlarge it.). It will be a sign of things to come: 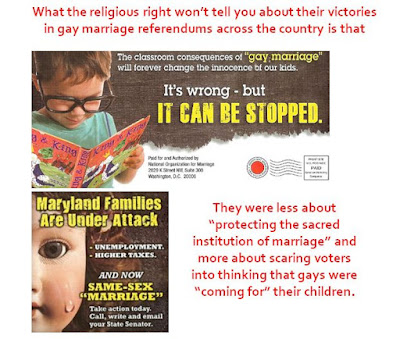 Posted by BlackTsunami at 10:58 AM No comments: