History was made on Tuesday (and someone probably won a bet about how soon this would happen) when Speaker of the House Nancy Pelosi formally announced an impeachment investigation against Donald Trump.

After months of tamping down calls for impeachment, House Speaker Nancy Pelosi announced Tuesday that she’s on board, a move that could upend Donald Trump’s presidency just barely a year out from the 2020 election.

“Today I'm announcing the House of Representatives is moving forward with an official impeachment inquiry,” the speaker told reporters after meeting with the Democratic caucus Tuesday afternoon. Pelosi said she will direct six House committees to investigate Trump “under that umbrella of impeachment inquiry. The president must be held accountable. No one is above the law.”

While the Judiciary Committee has already begun an impeachment investigation, Pelosi announced that the Intelligence, Foreign Affairs, Oversight, Ways and Means, and Financial Services committees will now formally join them in a broader inquiry.

The committees’ investigation is just a first step toward impeachment — a majority of the full House would still need to vote on articles of impeachment in order to indict Trump. The Senate is then responsible for holding an impeachment trial, but Republicans are unlikely to pursue one.

Pelosi’s announcement comes amid reports that Trump withheld aid from Ukraine and pressured its president to investigate former vice president Joe Biden’s family ahead of the 2020 election.


Meanwhile Hillary Clinton, Trump's 2016 election opponent, had this to say: 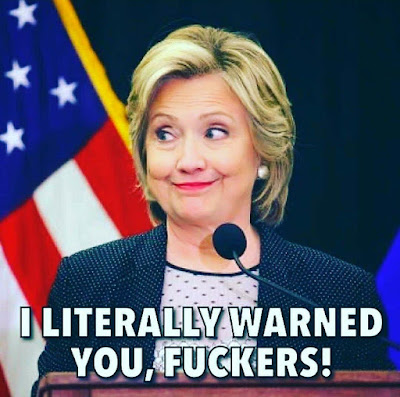 Okay, Clinton didn't say this. But would you blame her if she did?
Posted by BlackTsunami at 3:06 PM No comments:

How YouTube Continues to Alienate the LGBTQ Community - Siiiigh!
Posted by BlackTsunami at 9:10 AM No comments: