On Thursday, Mike Pompeo, Trump's nominee for Secretary of State, answered questions in front of a Senate committee. Pompeo has a lot to answer for regarding his past Islamophobic statements and alliances as well as his anti-LGBTQ record. Naturally, this means that those on the right, particularly the religious right, support him. They claim that he will stand up for "religious liberty."

Pompeo was questioned on his past comments by Senator Corey Booker. To hear the Family Research Council tell it, Pompeo came out smelling like a rose:

Later, when Senator Cory Booker (D-N.J.) tried to paint Pompeo as a hater or Islamophobe, Mike asked him to stop and consider the facts. "My record is exquisite in dealing with people of very different faiths... I've heard these critiques... I promise I will treat persons of other faith or no faith with the dignity they deserve."

Booker's attack became more intense, suggesting that Christians who believe in the Bible's definition of sexuality had no business running a government agency. Mike replied simply, "When I was a politician, I had a very clear view that [a same-sex couple] should not be married. Senator, I continue to hold that view." When Booker interrupted and asked how he could lead the State Department with that belief, Pompeo reminded him that you can disagree with someone and still treat them with respect. "We have married gay couples at the CIA, you should know. My respect for every individual, regardless of sexual orientation, is the same."


Bear in mind that this is the Family Research Council; a group which has been called out for lies and distortions time and time again by myself and so many others.

In this particular case, FRC chose to dance around an important part of the Booker/Pompeo exchange, i.e. the part where Booker asks Pompeo does he still think that being gay is a "perversion." The video below is timed to that exchange (1:40):

The fact that Pompeo refused to directly answer the question says much about why he is opposed. And FRC's attempt to use religion as a way to sidestep the exchange makes the situation even more problematic. Religious views have paved the way to anti-LGBTQ persecution in other countries.  And many of those views are the same as the one Pompeo earlier expressed. So where specifically would he stand on speaking out against this persecution. Evasive answers about treating people with respect isn't enough here. Would Pompeo speak out against international anti-LGBTQ persecution or will he  (to cite FRC president Tony Perkins's favorite word) give it a "mulligan" on the grounds of  "religious liberty?"
Posted by BlackTsunami at 5:32 PM No comments:

'Will Uganda reintroduce bill which could put gays in jails for life?' & other Thur midday news briefs 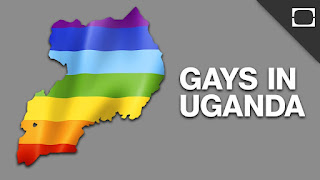 Ugandan MPs want to reintroduce anti-homosexuality law that could imprison gay people for life - And we are HERE again. Just in case you need a reminder, this monstrosity was originally unveiled thanks to American homophobes coming to Africa and scaring the heck out of people.

Related post - Slouching Toward Kampala: Uganda’s Deadly Embrace of Hate - GLAAD Media Award nominee Box Turtle Bulletin was the first and only news source to give an entire break down on what happened in Uganda to cause this mess.

Column: You’re not alone: LGBTQ students face dual stigma regarding sexual orientation, gender identity, mental health - Whenever we get blase or jaded about fighting for equality and especially calling out the anti-LGBTQ industry, we need to remember that our kids are depending on us.