Hate group leader and columnist Linda Harvey is what I like to call an "old school hardcore homophobe." Forget the deceptive and flowery language, because Harvey has no problem smearing, in very blunt language, the lgbtq community as pedophile sinners out to cause havoc and mayhem .

While her candor is nauseating, I consider Harvey a "useful idiot" in helping me to expose the true face of the religious right. Today, she is going to assist me demonstrating the hypocritical talking point about "gays not showing tolerance."

I'm sure you've heard of the talking point so many times that you can repeat it from memory. It goes like this "gays are always asking for tolerance for their lifestyle but won't show any for people who disagree agree with it." It's cute and very widely used semantic trick. Harvey uses it in a recent column, Jesus Rose To Save Homosexual Sinners:

People often comment on how vicious and intolerant the homosexual movement has become. “Where’s the ‘respect’ they said they wanted for everyone?”


Don't get out the weeping towel just yet. Harvey answers her own question in a way which demonstrates the hypocrisy of herself and the anti-lgbtq right in general

. . . it’s easier to understand – and even scarier – once we see what is going on at a deeper level in the anti-God orientation that produces same-sex attraction in the first place. They repudiate heterosexuality. They resent marriage, motherhood and fatherhood as designed by God. Newly legalized homosexual couples sometimes want a family, but it will be of their own crafting, eliminating either a father or mother in the process. It moves beyond sexual sin into a rejection of the design of God.


Seems to me that if you are whining about a group of people's intolerance to your viewpoint, the viewpoint in question shouldn't be one which smears them. But that's what we are talking about with Harvey and the religious right's viewpoint about the lgbtq community.  When they whine that the lgbtq community isn't "tolerating their viewpoint," what they are actually upset at is that we aren't acting like the docile half of an abusive relationship.  They cry foul because we aren't acting like the self-hating oversexed creatures they conjure up then hide behind their religious beliefs. They seem to think that we should take their demonizing language, lies, and attempts to deny us equality with good nature aplomb because they are supposedly "only expressing their religious beliefs" and we are nasty, dirty people who know that what we are doing is supposedly wrong.

No one can honestly say that any group, while being attacked and smeared, will just take the abuse in the name of "tolerance." Why should we?
Posted by BlackTsunami at 5:12 PM No comments: 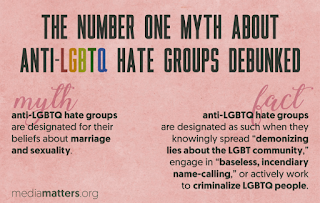 To paraphrase Addison DeWitt in  'All About Eve,' I am now available for dancing on rooftoops and singing in the streets. The reason? The war against anti-lgbt propaganda just got a bit more serious:

On April 13, Media Matters For America, in coalition other organizations including the National Center for Transgender Equality, The National LGBTQ Task Force, SoulForce, The Equality Federation, and The Matthew Shepard Foundation, launched the Eliminate Hate campaign — a new effort aiming to expose, undermine, and mitigate the increasing influence and harmful impact of anti-LGBTQ hate groups while empowering and supporting local leaders and community members confronting extremism in their daily lives. The Eliminate Hate Campaign is a broad-based nationwide coalition of organizations, faith leaders, and local community members who are united in our commitment to increase media accountability and public awareness of the growing influence and extremism of anti-LGBTQ hate groups; provide resources to empower grassroots actions to combat hate and extremism; and mitigating the harm caused by discrimination and bigotry.


The Eliminate Hate campaign features wonderful site with resources which our community and allies need to support. And it makes the point about how we need to stop being so cavalier about anti-lgbt groups, spokespeople and their propaganda. If we ignore them, they aren't going away. While we make fun of them, they are working behind the scenes to make us second-class citizens. And if we march in the streets against them, they will simply plead victimhood while kissing up to legislative bodies to pass more laws against us. We are talking about groups and individuals with budgets in the millions who are dedicated to eradicating our equality, right to self-determination, and dignity. Defeating these groups will take discipline and focus, not silly and vulgar comments and definitely not attacks on religion as a whole.

No more pussyfooting around. This battle is bigger than single entities. This battle is about us, our future, and most of all, the future of our lgbt kids. The big question is are you "down?"

Check out just a few the site's resources:

How The Media Covers Hate Groups: Six Years of Studies

LGBTQ Groups To Journalists: Stop Conflating Bigotry With Religious Faith
Posted by BlackTsunami at 9:19 AM No comments: