A Father's Day lesson in bigotry

A simple message on Father's Day by President Obama has some religious right organizations up in arms:


Nurturing families come in many forms, and children may be raised by a father and mother, a single father, two fathers, a step father, a grandfather, or caring guardian. We owe a special debt of gratitude for those parents serving in the United States Armed Forces and their families, whose sacrifices protect the lives and liberties of all American children. For the character they build, the doors they open, and the love they provide over our lifetimes, all our fathers deserve our unending appreciation and admiration.

NOW, THEREFORE, I, BARACK OBAMA, President of the United States of America, in accordance with a joint resolution of the Congress approved April 24, 1972, as amended (36 U.S.C. 109), do hereby proclaim June 20, 2010, as Father's Day. I direct the appropriate officials of the Government to display the flag of the United States on all Government buildings on this day, and I call upon all citizens to observe this day with appropriate programs, ceremonies, and activities. Let us honor our fathers, living and deceased, with all the love and gratitude they deserve.

The part which is making religious right groups see red is the acknowledgment of gay fathers. The usual cast of characters have responded with the same degree of vitriol with which the lgbt community has come to expect, including:

“Gay parenting is a selfish social experiment whose long-term effect on children has not yet been determined — biased homosexual-authored studies notwithstanding,” he said. “We know that dad-and-mom-led homes are the best for children. That is the timeless brand of fatherhood that Obama should be promoting.”

"This is the first time in our nation's history that a president has used Father's Day as an excuse to promote the radical homosexual agenda and completely redefine the word 'family,'" said AFA president Tim Wildmon. "Virtually all Americans have the common sense to recognize that children need both a mother and a father. Rudimentary biology tells us it's impossible for a child to have two fathers. But here we have the leader of our nation and the Democrat Party celebrating sexual behavior which is contrary to nature and pushing a household structure that we know is harmful to children. This is a sad day for the American family.

Also, the National Organization for Marriage falsely implied that through his proclamation, President Obama was saying that fathers didn't matter. 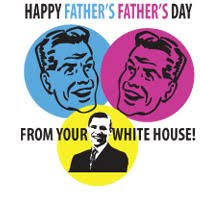 One has to ask what's with all the vitriol on the supposed Christian right about the President's proclamation? The answer is very simple.

The fact that some lgbts are parents - and good parents at that - is a constant thorn in the side of religious right groups. It throws a monkey wrench in their goal of pushing a false image of lgbts on American society (oversexed, selfish, and hedonistic) while at the same time holding back more truthful and positive images of lgbts under the phony guise that such images interfere with their "Christian sensibilities."

As you can see, truth has a way of pushing itself forward no matter how many ignorant hands are trying to hold it back. And the truth in this case is that gay fathers contribute positively to a child's upbringing.

Furthermore, the ideas that acknowledging the existence of gay fathers is somehow a slap in the face to heterosexual parenting or that lgbt parenting in general is an automatic detriment are simply the products of a prejudiced mind.

There is no need for competition here between heterosexual and lgbt parents. Certainly that wasn't in President Obama's mind and it's not in the mind of the millions of parents - be they lgbt or straight - who care for, nurture, and sacrifice for their children on a daily basis without asking anything in return.

The only folks pushing competition are America's supposed moral guardians on the right.

But there is something sinisterly wrong with the desire to eliminate or disrespect the presence of lgbt parents under the guise of "morality."

And there is something equally vindictive in claiming - with no proof at all - that somehow lgbt parents will harm their children.

The preponderance of studies clearly show that this is not the case. And if you don't believe me, just look outside your door. Many of us know lgbt couples who are raising families.

We need to ask ourselves do the images we see match the ravings that lgbt parenting is a "dangerous concept."

The fact of the matter is that some folks just plain don't like lgbts. And that's fine because it is their right.

But it's bigotry, pure and simple, for one group to tell another - "we don't like you, so you don't exist."

Posted by BlackTsunami at 3:20 PM 2 comments:

Papa can you jeer me: NOM patronizes patriarchs  -

Just two articles to highlight the bigotry and hypocrisy of some religious right groups and spokespeople. They constantly whine about "unfairly" being called bigots but then they do things like attack President Obama for noting the presence and contributions of gay fathers. Apparently our families are not important to them.

Texas GOP Wishes to Punish Straight People Who Support Gay Rights - Tell me again how it's about "LOVE." I dare you.

Weddings for Everybody! - Maureen Dowd NAILS IT about the Prop 8 trial.

The Boondocks, Tyler Perry, 'No Homo,' and Rocky Horror?

This a clip from the episode of the Boondocks which will either cause a feud between Boondocks creator Aaron McGruder and noted playwright and filmmaker Tyler Perry . . . or not depending on how much of a sense of humor Perry has.

And believe me, he is going to have a huge one, especially when one takes into account when character Huey Freeman astutely breaks down the plot to almost every Tyler Perry play and movie - seen here in clip one

or the HUGE Rocky Horror Picture show number in clip two when the Tyler Perry-type director sings an ode to cross dressing.

And yes, it gets worse - and by worse I mean funnier - after that.

Boondocks to take on 'No Homo' . . . and Tyler Perry? and other Tuesday midday news briefs

Posted by BlackTsunami at 4:47 AM 3 comments: