Yesterday, Texas Gov. Greg Abbott tweeted that voters should say no to the Houston Equality Rights Ordinance (HERO) while using the inaccurate talking point about male predators invading female restrooms. I sent him a tweet back decrying his attack on the transgender community. Today, I got an answer, not from Abbott, but from a source which puts a sadly ironic perspective on the entire situation: 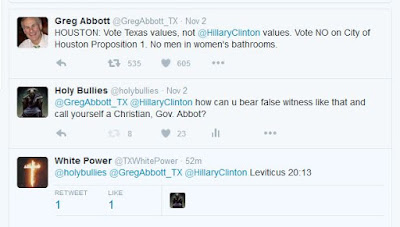 I snipped the exchange just in case the person decided to erase the message. And for the record, this person is no joke. I snipped other tweets and I'm surprised that this racist had time to send me a tweet, with all of the Holocaust denying and attacking African-Americans: 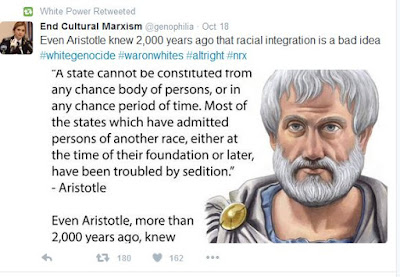 I would love to show that last tweet to all of the African-Americans who voted against HERO. If segregation had ever been put to a public vote, people this bozo would be saying "No negroes raping White Women." with as much vigor as some folks are repeating the lying talking point of "No men in women's bathrooms."

'Homophobia causing youth to turn away from religion?' & other Tue midday news briefs

Young Americans are becoming less religious — and anti-science, anti-gay rhetoric may be a factor: Pew - It appears that homophobia is causing the next generation to become less religious.


Why Is The LGBT Movement Struggling To Uphold A Simple Law In Houston? - Homophobia such as this. Should Prop 1 (HERO) lose today, Dominic Holden has already written a definitive article as to why. It's not because people haven't worked tooth and nail to keep the ordinance. Many have and they should be commended for it regardless of what happens. Holden's article is involves an old tactic by the anti-lgbt industry - sidestepping the real argument and endlessly repeating a mantra about how lgbt equality will harm children. Holden demonstrates how this mantra can take root and grow like a weed.

Ohio Gets Huge Bill For Battling Same-Sex Marriage All The Way To The Supreme Court - Yes sir, gotta pay that money!

A gay dad sounds off on the “purity” parents who want to keep LGBT info out of sex ed - THANK YOU! When things like this happen, people always quick to forget that lgbts are parents, too.

Photo courtesy of HRC.
Posted by BlackTsunami at 9:14 AM No comments:

It's election day and while the eyes of the nation are NOT on Houston, a significant portion of us are watching.

Will the Houston Equal Rights Ordinance (HERO) prevail or will the opposition's overwhelming lie about "men in ladies restrooms" carry the day.  Whatever the ending will be, I'm betting we can always count on the religious right and the press to hyperbole it to death.

Right Wing Watch has come out with a wonderful post which looks back on the five most vicious, bigoted attacks on HERO. You can look at all five by going here. However, for my money, the most telling has to be the vindictive rambling of Sen. Ted Cruz's bottom-feeding father Rafael Cruz.

His attack on the Houston's mayor, Annise Parker, simply because she is a lesbian:


No matter how they attempt to paint themselves, homophobes can't help but to bare their fangs. It's not about safety of women and children. It's about what it has always been about - i.e. keeping those "sinful homosexuals in their place."

What's going to happen today? We will see. But I think it's safe to say "we've only just begun."

And I, for one, am thrilled. Things were getting a bit too dull and complacent around here.
Posted by BlackTsunami at 4:45 AM No comments: