Dear Benham brothers, your 'religious beliefs' doesn't absolve you from the consequences of being extreme jackasses 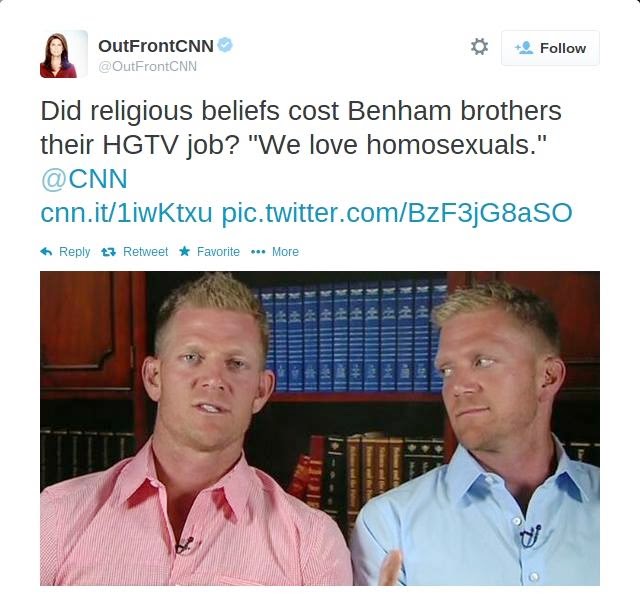 By now, many of you are aware that the HGTV network was going to launch a new reality television show starring the sons of a notorious North Carolina pastor:

Last month, the HGTV network announced that it will launch a new reality TV show, “Flip it Forward,” starring David and Jason Benham. The twin brothers will “leverage their good-natured sibling rivalry to help families find a fixer-upper and transform it into the dream home they never thought they could afford.” What the announcement didn't mention is that at least one of the Benhams is not just a real estate dealer but also a dedicated right-wing activist in the mold of his father, Flip Benham, who has headed the abortion-clinic protest group Operation Save America ever since it split from the militant anti-choice group Operation Rescue.

As leader of OSA, Benham has condemned the interfaith Sandy Hook memorial, protested in front of mosques while shouting “Jesus Hates Muslims” and blamed the Aurora shooting on the Democratic Party, which he said promotes a “culture of death.” He has also protested LGBT pride events, interrupted church services during a sermon by “sodomite Episcopalian bishop” Gene Robinson and was found “guilty of stalking a Charlotte abortion doctor after passing out hundreds of ‘wanted’ posters with the physician's name and photo on it.” OSA* even blamed the Sept. 11, 2001, attacks on abortion rights.


David and Jason are in the same mold as their father:

Flip's son, David Benham, led a prayer rally — Charlotte 7:14 — outside of the Democratic National Convention in Charlotte, North Carolina in 2012, which he told conservative radio host Janet Mefferd was needed to stop “homosexuality and its agenda that is attacking the nation” and “demonic ideologies tak[ing] our universities and our public school systems”

In a January 2012 interview, Benham explained his “love” for homosexuals when he suggested that gay people are under the control of “demonic forces,” arguing that once he succeeds in recriminalizing abortion, he will next defeat the “homosexual agenda” and Islam.

David equated fighting marriage equality with fighting Nazis, and at a City Council meeting in protest of a local pride parade, David and his twin brother, Jason,  referred to homosexuality as "destructive" and a "tragedy;" asserted that Jesus "refuses to leave [homosexuals] that way;"and Jason concluded by telling the council to "deny them every permit they ask for."

'Sen. Ted Cruz - ''Christians' shouldn't have to do business with gays' & other Thursday midday news briefs

Scott Lively stirring Russia's pot: A timeline - Disgusting, nauseating, and vile. But very necessary that we know this.

The gay community is fighting Godzilla with a slinky toy - One of the times when I feel that one of my earlier posts needs more attention via more folks reading it.

Battery Charges Dropped Against Calif. Trans Student - Good! She shouldn't have been charged in the first place. She kept getting picked on and finally got tired of it.

'Washington - A Man Of Prayer': Highlights From The Religious Right Prayer Event Inside The US Capitol - When oblivious people gather to pray, they tend to be more oblivious than usual.

“I can assure you this is going to attract attention to this state for absolutely the wrong reason . . . As soon as S-E-X is mentioned in a book at the college level, we’ve got a hang-up,” the Orangeburg Democrat said, adding the votes to sustain the House-passed cuts made the Senate look like a “bunch of old guys” who are offended by homosexuality.

Hutto was "reading" the rest of his SC Senate colleagues because some of them wanted to retained budgetary cuts given to the College of Charleston and the University of South Carolina Upstate as some sort of punishment for offering gay-themed books for students to read. According to the State newspaper, while the cuts were eliminated, Sen. Mike Fair led the charge to get them renewed. Senators debated for hours over the issue. Some, such as Fair, called the books (Fun Home and Outloud: The Best of Rainbow Radio) pornographic. Other senators said the issue was about academic freedom and lawmakers shouldn't micromanage colleges. Hutto, specifically, blocked further progress on the state's budget until the matter is settled. Senators are expected to vote today.