I have yet to see any of these so-called morality groups appeal to kindness  or clarity when it comes to the case of the Syrian refugees who have become the scapegoats of the recent attack on Paris. If their comments are like those below from the Tony Perkins of the Family Research Council, then its simply another notch in their belts of lies and duplicity:

That's an uncomfortable reality, even for the church. There seems to be a growing chorus of Christians who justify these open-door policies on immigration or asylum with the Bible's command to "love the stranger." I agree, we should love the stranger -- but that doesn't mean we have to do so at the expense of our own security. The president's chief responsibility is to protect Americans from all enemies, foreign and domestic. It's our job then, as individuals, to show love and compassion. And there are plenty of charitable solutions for refugees that don't involve bringing them to America, unchecked and unaccountable. One option would be to make their homelands safe while we offer as much humanitarian relief as possible.

Our nation can be caring and benevolent without unnecessarily endangering our own people. What many forget is that in Scripture, loving the stranger is just one component. God also commands these foreigners to assimilate and keep the laws of the land. As Exodus 12:49 makes clear: "There shall be one law for the native and for the stranger who sojourns among you." The United States' goal should be a safe haven for everyone. And that means protecting the refugees' shelter abroad without sacrificing ours at home.


The statement sounds reasonable except for the fact that it is predicated on the unverified belief that one of the perpetrators of the attack in Paris posed as a Syrian refugee.

But according to Think Progress:

The majority of attackers were identified as French or Belgian nationals. An Egyptian passport was also found, but the Egyptian Ambassador to France said it belonged to a critically wounded victim and not a perpetrator. The Syrian passport caused a ruckus, with some politicians in Europe and the U.S. calling for a halt to Syrian refugee resettlement. An increasing number of state governors are trying to defund the settlement program. American officials told CBS News that the passport might be fake, while British-daily the Independent reported that a man was arrested in Serbia while carrying a Syrian passport with matching details to the one found in Paris.


We all know that the Islamic State of  Iraq and Syria (ISIS) claimed responsibility for the attacks but again, the passport claim has not been verified as a complete fact.

The success of the anti-gay right with stopping a non-discrimination act in Houston has led the Family Research Council to heights of great audacity.

In Houston, anti-gay activists stopped the measure by claiming that  it would lead to male predators invading women's restrooms, i.e. exploiting ignorance about the transgender community. The Family Research Council is using the same distortions to stop a national non-discrimination ordinance, The Equality Act.

FRC spokesman Peter Sprigg had an interview with the American Family Association's One News Now in which he spouted off several lies:


Peter Sprigg of the Family Research Council notes that U.S. Sen. Cory Booker (D-New Jersey) is sponsoring the "Equality Act," which would amend current federal laws to protect homosexuals based on claims of discrimination. Asked if the Equality Act mirrors the non-discrimination bill that was recently defeated by voters in Houston, Sprigg tells OneNewsNow that it is.

In fact, he says, it also includes the "public accommodations" requirement in Houston's HERO law. That allowance is the reason Houstonians described HERO as a "bathroom bill" and likely a reason it was soundly defeated.

The Equalty Act would give homosexuals, lesbians, bisexuals, trangender, and "gender noncomforming people" access to "places of public accommodations,"  Lambda Legal, a pro-homosexual legal organization, admits on its website.

"And it does not make any exception for facilities in which there's a normal expectation of privacy from the opposite sex such as restrooms, locker rooms and showers," Sprigg warns. "So it would be a bathroom bill on a national level being forced on all 50 states."

Sprigg and the rest of the religious are merely exploiting a useful hook. In the past, they spoke against ENDA, another national non-discrimination ordinance which lgbts were attempting to make into law, by claiming that children would be "trapped" in classrooms with "drag queen" and "cross-dressing" teachers:

It now seems that they have abandoned the classroom lie because focusing on bathrooms and locker rooms, where females are seemingly more vulnerable, reaps more success.

If you don't think so, check out the comment section under the Sprigg article.  The religious right know how to exploit a good scare when they see one.

The following graphic is courtesy of Media Matters: 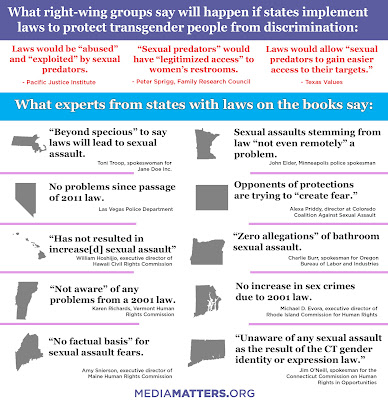 But we know what they say about how hard it is for the truth to compete with a lie, particularly one draped in religion and false concerns about safety.  The sad thing is that people are either so scared or so exploited by their religious beliefs, they won't see that they are being used by folks like Sprigg and organizations like the Family Research Council


Scalia Compares Legal Protections For Gay People To Protections For Pedophiles - Based on his logic, you can compare legal protections for African-Americans and women to pedophiles, too. To help answer your question, Scalia, minority groups whose behavior is not against the law and historically have been the victims of historical oppression should have legal protection. Folks, whoever wins the next presidential election gets to pick SCOTUS judges and Republicans want more judges like THIS $@!*

Charlie Sheen, HIV Stigma and Why the Media Panic Is Ugly - Charlie Sheen announcing his HIV positive status opens a much needed discussion on stigma.

Breaking: Utah Judge Who Mandated Foster Child Be Placed With Heterosexual Parents Removes Himself - Just in case you haven't heard this piece of good news . . .

Here's How These Two Amazing Gay Dads Started Helping Other LGBT People Adopt - I need more "happy." THIS is happy.
Posted by BlackTsunami at 9:06 AM No comments: