Maybe it's simply the eternal optimist in me but I think that President-elect Donald Trump's association with the religious right could have a silver lining for the lgbt community.

I came to this conclusion while I was reading an excellent piece in Think Progress detailing how Family Research Council talking head - and Trump's top domestic policy advisor - holds the unscientific view of being an lgbt is a "lifestyle" that "can be changed."

That's when it dawned on me. Trump's election has swiftly done the one thing I and so many others have been attempting to do for years - put a spotlight of on these fake religious groups, their distortions about the lgbt community, and the methods they seek to curb our equality.

Don't get me wrong. I am fearful of what a Trump presidency will mean for the lgbt community, especially in the areas of transgender and marriage equality. But I also believe that if a fight in inevitable, one doesn't sit and wait for your opponent to come hammering in.

Unless I am wrong - and please correct me if I am - this is the closest religious right groups have ever worked with any president, including President Bush, to achieve their goals. That means they have a spotlight when they've never really had before.

And that also means we have the capability of controlling that spotlight and shining a bright light on every lie, every distortion, every unscrupulous action groups like the Family Research Council, the Heritage Foundation, other religious right organizations and individuals associated with them have done in the name of stopping lgbt equality.

The articles and posts that the lgbt media write about the  homophobic exploits of these groups and individual could have better chance of breaking through to mainstream coverage. And finally we can educate the public at large about the true "morality" and "values" of these groups.

Of course, this is merely a theory. But I think it's a good one. The religious right now has the power they crave to make negative changes against the lgbt community. But with that power comes more interest in what they are.

We now have a good chance to define them to America. The proverbial Sword of Damocles have moved from us to them and there is nothing wrong with us cutting the thread

18 Anti-Gay Groups and Their Propaganda

How They See Us: Unmasking the Religious Right's War on Gay America
Posted by BlackTsunami at 3:46 PM 1 comment: 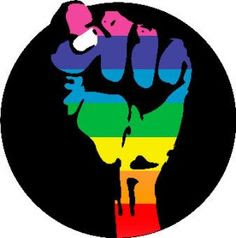 Trump’s Latest Gay Marriage Comments Mean Little If He’s Serious About His SCOTUS Picks - Trump says he won't harm marriage equality because it's been settled by the courts. He is partly right. He is going to leave that to his religious right co-horts, including his vice president.

Trump Says It's 'Irrelevant' What He Thinks About Same-Sex Marriage – But Justices He Appoints Will Overturn It - And let another article reiterate that point.

Editor's note - and let's not focus solely on marriage equality. Under a Trump administration, everything we fought for and continue to fight for - especially equality for our transgender brothers and sisters - is in danger.

Transgender people are scrambling to update their documentation - Like I said. It's not just about marriage equality.

Breitbart’s Greatest Hit (Pieces): Some Of The Website’s Most Disgusting Headlines - Why some folks, except it seems for the Family Research Council, is alarmed that white nationalist Steve Bannon will now be helping to set the country's policy.

Peter Thiel named to Trump transition team - Just add those 30 pieces of silver to your billions, my friend.
Posted by BlackTsunami at 9:13 AM 1 comment:


Like I said in my last post. President-elect Donald Trump needs to start making some high profile choices with regards to good domestic and economic policy.

On Sunday, Trump announced the CEO of his campaign, Steve Bannon, as his chief strategist and senior counsel. Then the internet practically exploded. Why? Probably because of Bannon's association with white nationalist circles.

Before coming to the Trump campaign, Bannon was head of the Breitbart News Network. According to the Huffington Post:

At Breitbart, Bannon helped make the hardline populist website a go-to resource for white nationalists and the alt-right, according to the Southern Poverty Law Center, which monitors hate groups.

. . . Breitbart has propagated conspiracy theories, like Planned Parenthood having Nazi ties or Clinton aide Huma Abedin being a spy for Saudi Arabia. The website traffics in misogynist and racist stories; it frames women who push back against harassment or gender bias as weak and incompetent and portrays people of color and immigrants as inherently criminal.

. . . The SPLC and the Anti-Defamation League expressed concern over the appointment as well, with the ADL saying Bannon and “his alt-right are so hostile to core American values.”


Trump's selection of Bannon obviously received almost universal condemnation. But two of his strongest supporters are allegedly pleased with the selection:


David Duke just made his public statement on how proud he is of the appointment of Steve Bannon as Trump's Chief Strategist.


Trump voters wanted changed and they have it already. It's not every day that a leader of the so-called evangelical Christian right joins a leader of the white supremacist movement in openly praising a presidential selection.

A new world it is, indeed. Although I wouldn't go so far as to call it brave.
Posted by BlackTsunami at 4:58 AM No comments: