Some people have voiced their disagreement with newly elected Virginia governor Glenn Youngkin picking Kay Coles James, a woman who promoted voter suppression and false voter fraud claims, as his choice for Secretary of the Virginia Commonwealth.

Until last year, James served as president of the Heritage Foundation, a Trumpist right-wing think tank that has aggressively promoted bogus claims about widespread voter fraud that are used to justify more restrictive voting laws. James has opposed federal voting rights legislation such as the “For the People Act,” which she denounced as a “federal takeover of elections” and a “threat to election integrity.” She claimed last year that “the left’s real agenda isn’t about helping minority voters; it’s about helping themselves: They believe voter fraud favors their candidates, plain and simple.”

Ms. James is a black woman, which may have helped her get the appointment. Granted, I don't know that for sure and it can be seen as an unfair shot to make such an assumption. Still, one shouldn't be so naive to not consider that her ethnicity will be exploited to blunt accusations of racism which generally come up (because they are mostly true) with regards to voter suppression.
Also, when it comes to exploiting minority status, this wouldn't be Ms. James's 'first time at the rodeo,' so to speak.
In a 2019 interview on Fox News, she attempted to divert from accusations that the Heritage Foundation - which she led at the time - was a homophobic group. She did so by revealing that her son is gay.
According to Media Matters:

Heritage Foundation President Kay Coles James downplayed the organization’s long anti-LGBTQ history in an appearance with Fox “straight news" anchor Shannon Bream.
. . . On May 2, Bream interviewed James about Google’s recent decision to disband its Artificial Intelligence ethics board after Google employees and others protested her inclusion on the board in part because of her and Heritage’s positions against transgender rights. During the interview, James whitewashed her organization’s anti-LGBTQ history and responded to criticism of the organization’s stance on queer issues, saying, “None of which is true, by the way. None of it is true.” She also suggested she could not be a “homophobe” because she has a gay son.

This is what James said:

. . .Homophobe? I don't think so. You know, I, I, I've never talked about it publicly, but I have a gay son whom I love beyond all measure. And he and his community have welcomed me, have helped me grow, have helped me to understand. There’s no hatred there. That’s my child you are talking about.

Bream did not challenge James about this because of simple bias.
Media Matters has pointed out that while Shannon Bream pretends to be a journalist, she has used her show as a sounding board for anti-LGBTQ groups and positions. She is especially "known" for inviting anti-transgender groups and spokespeople on her program where all involved routinely smear and misgender trans people.
If Bream was any type of decent journalist, she would have asked James about the contradiction between her statement about her gay son and the Heritage Foundation's homophobic and transphobic positions.
Bream could have even asked James about the contradiction between her statement  and the tweets which she (James) were sending out at almost the same time about the Equality Act. James claimed that the gay community accepted her and allowed her to grow, but apparently not so much that it prevented  her from amplifying misinformation about laws benefitting the community and particularly her son. 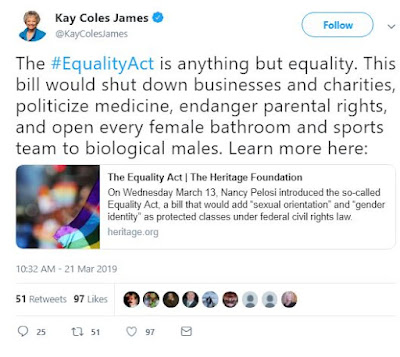 So perhaps my accusations about James's ethnicity being exploited by the Youngkin administration aren't as rude as they seem. If she has no problem exploiting her son's sexual orientation to cover up homophobia, why should she have a problem exploiting her ethnicity with regards to potential  voter suppression accusations?
Even worse, based upon how easily she exploited her son's sexual orientation, LGBTQ Virginians may also have something to fear with regards to her appointment.
Posted by BlackTsunami at 5:23 PM No comments:

Amy Schneider Makes History Again Becoming First Woman to Win $1M on Jeopardy!​- Good for her. Keep shining in spite of the haters.
Meet five trailblazing LGBTQ candidates of 2022 - More of us should run for office.
Out wrestler Jake Atlas returns to the ring fight against mental health issues - Good for him. I hope it works out.
Skater Timothy LeDuc Could Make History As First Nonbinary Winter Olympian - Success!
Posted by BlackTsunami at 9:09 AM No comments: