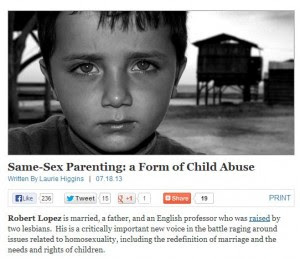 San Diego County Clerk Asks Court to Block Gay Marriage - Funny how when the Prop 8 vote went their way, opponents of marriage equality chided the lgbt community for not accepting the vote. Yet another notch in the belt of hypocrisy.
Posted by BlackTsunami at 8:59 AM No comments:

One of the most annoying qualities of National Organization for Marriage former head Maggie Gallagher is how pathetically transparent she is when it comes to lying.

Last week is a perfect example. On July 15, she made the following statement in the National Review:

Chuck Limandri, my old friend from the Carrie Prejean, Prop 8 fights, is a heckuva a lawyer and one brave man. He’s taking on the Southern Poverty Law Center’s massive legal machine to defend the right of Jewish gay people to seek help:


“If SPLC wins this landmark legal case, it will communicate to gays and lesbians seeking to conform their sexual lives to Torah values that they are second-class citizens, without the same right to seek help that other gay people enjoy,” said Limandri.

SPLC is using consumer-fraud laws to try to bankrupt these small nonprofits and if it wins this case has announced plans to take it nationwide against 70 groups offering some form of sexual-orientation-change efforts. They must not want publicity because this landmark case is flying under all media radar screens.


Limandri is defending a Jewish ex-gay therapy group, JONAH from a lawsuit by the Southern Poverty Law Center for consumer fraud. By her statement, Gallagher was giving support not only to JONAH but the practice of ex-gay or "reparative" therapy.

Doing this contradicts not only her but NOM's talking points that they are merely attempting to protect marriage.

So what did Gallagher do to cover up her inadvertent comment? She lied like a rug. In the July 18th edition of National Review, she said the following:

My last NRO post on Chuck Limandri and the ConscienceDefense.org case he will argue tomorrow in court in Jersey City has generated predictable headlines in the gay/left press that I’m now backing “conversion therapy.” I don’t back something called “conversion therapy.”  I don’t even really know what conversion therapy is, and I’m not qualified to express an opinion on a particular kind of therapy.

I back the right of gay people to seek the kind of counseling help they want, not the kind the SPLC lawyers want them to have, including help to live their sexual lives with integrity, according to their own values, not the SPLC’s values. That’s all.


And there is the immature quality of lying in the face of insurmountable proof. According to Equality Matters:

Gallagher is lying. In 2001, she wrote an article for Townhall.com explicitly calling for more federal funding for research into "ex-gay" therapy, calling homosexuality "a sexual dysfunction":

He was a brave man back in 1973 when, as a member of the American Psychiatric Association's Task Force on Nomenclature, he met with gay activists. As a result of his intervention, the APA, while rejecting the argument that homosexuality is "a normal variant of human sexuality," agreed it "does not necessarily constitute a disorder."

He was an even braver man this week when he reported the results of a new study of 200 "ex-gays": "(S)ome people can change from gay to straight, and we ought to acknowledge that," as he told the Associated Press.


Furthermore, in the first National Review post regarding the JONAH lawsuit, Gallagher bragged about being chairman of Limandri's group. Surely she must have known about the lawsuit beforehand.

Finally, how could Gallagher not know a thing about reparative therapy when her group, NOM issued support of JONAH in the lawsuit on its blog with language and tone almost similar to what Gallagher used in her National Review post:

On Friday my friend and hero Chuck LiMandri (who was one of the first to help us get Prop 8 on the ballot!) will be in court in New Jersey, taking on the goliath Southern Poverty Law Center (SPLC) and its new militant attempt to misuse consumer fraud laws to attack a small Jewish nonprofit named JONAH that helps observant Jews with same-sex attraction live according to the Bible's laws.

This is one of the hugest stories you've never been told by the media: the SPLC wants to use its $250 million budget and 7 full-time staff lawyers to bankrupt therapists, counselors, and religious nonprofits that offer help to people with unwanted same-sex attraction. And they are misusing "consumer fraud" statutes to do it.

I suspect SPLC picked a Jewish service organization first because they were hoping many of us in the Christian community would ignore it. But whatever you think about sexual orientation, it's wrong to tell people they can't ask for help to live their sexual lives as they choose, not as the SPLC's lawyers want them to do.


It's Gallagher's incredible audacity to tell a blatant lie in the face of so much contradictory evidence which has led many to see NOM for the fraudulent organization that it is.