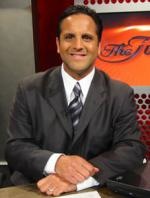 The National Organization for Marriage has a new phony victim of the so-called gay plot to "silence Christians." And like their past other fake martyrs, his story is highly suspect.

If we are to believe the video, which I refuse to post to my blog (you can see it here if you like), Damian Goodard is a freelance sportscaster who was fired from Rogers Sportsnet (a Canadian company) earlier this year for allegedly tweeting against marriage equality.

Now some folks have been quick to point out that this has nothing to do with marriage equality in America. Of course the religious right combats that with the "slippery slope" argument. Others have said that this situation is a free speech issue. And that could be.

But then there is a third argument which needs to be explored.

According to Jeremy Hooper from Goodasyou.org, Sportstnet is saying that Goodard was fired for "a number of well-documented reasons" which the company will reveal should Goodard seek legal action. A representative of Sportsnet also said that Goodard is aware of those reasons.

As it is known, Goodard has not sought legal action.

And that leads me to ask, just what is he hiding?

Posted by BlackTsunami at 8:28 PM 3 comments:

The motion picture Car Wash (1976), which tells the story of a day at a car wash populated with oddball characters, is memorable for two reasons.

One is because of its slamming, Grammy-award winning soundtrack.

And the other is because of the gay character, Lindy.

Now Lindy was apparently meant to be cheap comic relief, but he ends up being much more.

The actor who portrayed him, Antonio Fargas, created a three-dimensional character who holds up as a gay role model decades later.

At first, one could see Lindy as a stereotypical effeminate gay man. He is first seen doing his hair and then heading towards the ladies room.

And throughout the movie, he is the victim of various snide comments.

However, Lindy takes it all in stride because he knows who he is and is not ashamed of it.

This is evident in the scene in which everyone remembers - him confronting another employee of the car wash, Abdullah (Bill Duke), for his surly attitude:

Duke's character is cast as the heavy, i.e. the villain, but he really isn't. If anything, he and Lindy are similar in that they are both men which society looks down upon.

Where they should be recognizing this and teaming together, they are at each other's throats.

The thing is that Lindy doesn't care about what people thing. Abdullah, on the other hand, is the conscience of the movie. He feels trapped with no other place to go, but has no way of getting.

Lindy will survive what the world throws his way because he is used to the slings which come from being an openly gay black man.

Abdullah's character is like a babe in the woods. Without proper guidance - which he gets at the end of the movie - he will end up either dead or in prison.

Still though, Lindy's character can teach us all about self-love and not giving a damn about what petty people think.

Incidentally, when Car Wash premiered on television, Lindy's character was conveniently excised out. On some cable showings, you will never see him.


Read more »
Posted by BlackTsunami at 3:40 PM No comments:

Protect Marriage Washington and NOM Lose Last Ditch Effort To Hide Ref 71 Names - In what is becoming a common occurrence, NOM loses in the courts AGAIN.

Pastor: "Homosexuals account for half the murders in large cities" - No doubt you have already heard about this incident. Now comes confirmation from The New Civil Rights Movement that the pastor was making a highly misleading statement.

The loving face of Prop 8 - Oh look. A potential pro-Prop 8 witness who will actually work to make the case against Prop 8.

Another Attempt To Repeal SB48 - Hateful people have too much time on their hands.

Anti-Gay Activists Turn Penn State Scandal Into Horror Story About Homosexuality - They are sneaky about it, but more and more of them are steadily doing it.

This morning, the American Family Association's phony publication, One News Now, is railing on the corporations who filed briefs asking for the elimination of DOMA (Defense of Marriage Act).

With the headline Businesses have no business in culture war blaring in bold letters, One News Now doesn't make any bones as to the direction it is going in the article. And this point is further made by the one person the author's article, Charlie Butts, chooses to quote in the article - longtime homophobe Matt Barber of the Liberty Counsel:

Matt Barber of Liberty Counsel Action finds it unfortunate to see the firms "alienate a large percentage of their customer base" by choosing sides in a very polarized culture war, and he is especially disappointed to see CBS advocating for the repeal of the Defense of Marriage Act "when CBS purports to be an objective news agency." But he decides the network's part in the lawsuit "kind of reveals them and really underscores and supports what we all know -- that in the mainstream media ... liberal bias runs amok."

Barber also extends a special bit of venom to Starbucks:

You know, there was a scandal a while back where they were putting pro-homosexual propaganda on some of their Starbucks coffee cups," he recalls. "There was an uproar, but now we see that Starbucks is again emboldened and again carrying the water for radical homosexual activist organizations."

Barber contends that Starbucks needs to "get out of the business of pushing radical San Francisco-style social policies, and instead get about the business of making good coffee."

So with the help of Barber, One News Now seems to be making the point that companies should stay out of the fight for gay equality.

Too bad One News Now doesn't have the same frame of mind when it comes to companies fighting against gay equality. Remember this jewel in January:

A pro-family organization that works to equip churches to transform the culture is defending a privately held, family-owned chicken restaurant that is under fire for providing lunches for a recent marriage seminar.

In addition to closing on Sundays to allow worship and family time for its employees, Chick-fil-A and many of its franchise owners across the U.S. have pledged to contribute to everything from marriage seminars to retreats and counseling for the employees of its 1,200 locations. The perk has gone largely unnoticed until recently.

"A local Pennsylvania Chick-fil-A decided to donate some box-lunches to a seminar called 'The Art of Marriage: Getting to the Heart of God's Design,'" reports Family Research Council (FRC) president Tony Perkins. "Since then, the fast-food chain has come under attack from liberals, who say these sandwiches are somehow a political statement against homosexuality."


Of course that's not the entire story. The marriage seminar was sponsored by the Pennsylvania Family Institute, a conservative research and education organization associated with Focus on the Family. And both of these groups are vehemently opposed to marriage equality.

Furthermore, it was discovered by an investigation via Equality Matters that Chick-Fil-A has a long history of donating to anti-gay groups and causes to the tune of $1.1 million. Futhermore, the company has not only partnered with some of these groups but on some occasions have sponsored them.

So the question here is does One News Now hold Chick-Fil-A to the same standard that it does with business who are pushing for gay equality? Does One News Now think that Chick-Fil-A should stay out of the so-called culture war and concentrate on making "good chicken?"

Who are we kidding? We all know the answer to that question.