Homosexuality compared to a flesh-eating virus: A lesson in 'fake Christian victimology'

Presenting another lesson in fake Christian victimology thanks to  Pastors Kevin Swanson and Dave Buehner at Generations Radio via Right Wing Watch:

Buehner: Women don’t trust men, women raise sons, sons don’t trust men, but there’s a hole in their heart, looking for a man, looking for the love of men, they’re not getting the love of their father, they’re going to go seek it out in other men, i.e. male homosexuality. A woman does not have a trust in a man, she didn’t see a loving relationship with a man, she’s been taught that husbands are buffoons and that at best get yourself a man who is a good roller coaster ride for the night, maybe try and get a few bucks off of him doing the amateur prostitution thing but move on, keep your independence from the family and from the man and ergo why not just go ahead into lesbianism.

Now homosexuality and lesbians start building on each other and snowballing. I believe that we are at the knee of the curve here, in other words, the rate of homosexuality in society has been fairly low, it’s been in the low one percent, two percent, we’ve always had some but it’s been low, I think it’s going to skyrocket in the next decade.

Swanson: It certainly does have a good sales program, the brochures are as glossy as they can possibly be, they are being sold in public schools all over America and it’s very possible this thing can go hyperbolic in the next couple of five to ten years, I wouldn’t be surprised at all, especially with the breakdown of the family, and we have two to three to four times more kids raised outside of a nuclear family as they were even in the last generation twenty years ago. We’re continuing to see a breakdown and what a lot of our leaders don’t want to recognize is that we’ve got a humongous problem on our hands.

It’s not like this car’s been through an accident and has got a few nicks on the bumper; the steering wheel is in the trunk, the steering wheel is in the trunk, this thing has been accordioned all the way from the hood into the trunk and we’ve got a major civilization accident on our hands and it’s going to take something really serious, something radical in order to repair this. It is probably going to have to be repentance, that is we’re going to have to repent of a lot of things and a lot of fundamental problems.

The body itself is shot through with this disease and it is occasionally busting through in these sores called homosexuality and these sores seem to be spreading all the time, especially over the last fifteen to twenty years. What guys like Paul Ryan are doing, what the politicians are doing with their approval of civil unions and homosexual marriage is that they are taking these sores and they are carving happy faces into them, they are calling this sore ‘gay’ and they are carving happy faces into them, they are making it appear to be a wonderful, wonderful thing that we have these sores breaking out and this is precisely what’s happening with our church leaders and civil leaders that are constantly wanting to endorse homosexual marriage. The fact that you have Mike Horton from the White Horse Inn endorsing civil unions as a possible way in which we can love our neighbor is again an ecclesiastical leader of the Reformed stripe saying this is cool, put the sore into a smiley face, it is okay, we are going to put the stamp approval of the civil magistrate on this thing, and the ecclesiastical leaders and the civil leaders are doing the same thing with it because they will not acknowledge that we are under the judgment of Almighty God.

Any questions?
Posted by BlackTsunami at 3:22 PM No comments:

Editor's note - today's news briefs features a special look on something that we will unfortunately being hearing more about - fake Christian victimology.

When Christians become a 'hated minority' - IN SPITE OF the title, this is a rather good article which looks at both sides of the debate. I particularly liked how the author interviewed the Southern Poverty Law Center's Mark Potok. HOWEVER, I also feel the author made the same mistake others make when they approach the subject of fake Christian victimology. He didn't challenge religious right figures such as Peter Sprigg on the hateful language or the claims they make against the lgbt community. In this debate about fake Christian victimology, there needs to be a detailed look at the junk science spouted by the religious right about the lgbt community and the researcher complaints about how their work is constantly distorted by the religious right.

Reach America's High School Anti-Christian Bullying Video Calls For An 'Army' To Save America's Souls - because if there isn't a detailed look, the religious right gets away with junk like this.

Peter Sprigg And The Values Victim Caucus - When fake Christian victimology is debated, voices like Wayne Besen's need to be heard.

Bryan Fischer: Inclusive immigration reform would be 'importing' 'sexual dysfunction'- Comments like this need to be brought to the forefront.

How They See Us: Unmasking the Religious Right War on Gay America - Because what we are talking about here isn't anti-Christian persecution but a certain segment of the population not being honest about their claims and attacks on the lgbt community, something which is decades old.
Posted by BlackTsunami at 9:05 AM 3 comments:

Apparently the religious right are upset to the point of insane distraction by the fact that NBA player Jason Collins came out of the closet. While the lgbt community, while still celebrating Collins' decision to be open about his life, have pretty much moved to other matters, the religious right continue to castigate Collins. The following are just a few examples:

There is this graphic which portrays Collins as a threatening black man: 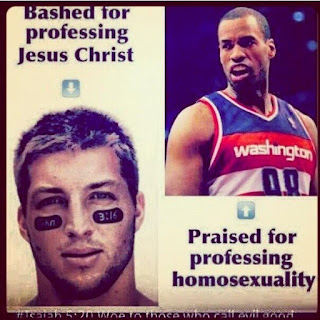 Then there are several comments via several religious right figures:

Matt Barber of the Liberty Counsel:

But, lest you worry about Jason Collins’ incredible act of courage going otherwise unlauded by this president and his mainstream media, I shall hasten to comfort you. For Mr. Obama also heaped spoonfuls of sparkly-sweet sugar upon Jason’s hate-tattered brow at a frenzied news conference. CBS News describes it thusly: “President Obama told reporters he ‘couldn’t be prouder’ of NBA player Jason Collins, who one day earlier announced he was gay. Mr. Obama said Collins is ‘a role model’ to be able to say, ‘I’m still 7-foot-tall and can bang with Shaq, and deliver a hard foul.’” Um, right, exactly. If we can’t be proud of sodomy, what can we be proud of?

As it turns out, [Jason] Collins is actually an ex-heterosexual. Since he had a relationship with a woman, his ex-fiancée, who told reporters she had no idea about this other side of him. Some might say that this is bisexuality but it really reveals an anything-goes sexual behavior that once again is an evidence of choice, not something inborn. Many in our politically correct media will of course refuse to see this and connect the dots. Let me refer to a couple of Christian commentators who had insights on the Jason Collins situation. Steve Nobel of Called2Action Ministries sent out an e-newsletter with his headline, “Why is this news and why did the President of the United States call him?” Noble went on to say, “I’m so tired of ‘gay this’ and ‘gay that,’ aren’t you?” Yes Steve, you’re not alone in thinking we’ve heard enough deceit about a sinful, high-risk behavior. It’s not like race, no one is born this way, and Jason Collins should feel shame and a desire to change, not pride.


But the blue ribbon has to go to anti-gay activist Dave Daubenmire who freaks out over President Obama calling a man who supposedly participates in "butt sex:"

So while America celebrates the fact that pro-athlete had the courage to come out of the closet thus be a role model to the millions of adults and children who are struggling to be able to accept their God-given sexual orientation, the religious right simply sees a threatening black man who has "butt sex."