Longtime readers of this blog know that from time to time, I like to refer to the religious right "news" webpage One News Now to point out the inaccurate notions or cherry-picked facts of the anti-LGBTQ industry. On Friday, I missed a doozy.
Apparently, according to one article, marriages are on the decline:

The marriage rate in the United States has dropped to its lowest point since someone began keeping records, and anyone who is not a man-hating feminist knows that is a bad sign for the future. A new report from the National Center for Health Statistics shows marriages fell 6 percent from 2018 to reflect an average 6.5 unions per 1,000 people, the lowest number since the federal government began keeping records in 1867.

And guess who or rather what is to blame for this, that is according to Donald Trump-loving pastor, Robert Jeffress. The answer is relatively easy:

Dr. Robert Jeffress, who leads First Baptist Church in Dallas, says one reason for the drop in marriage can be traced to the landmark Obergefell decision in 2015 that legalized same-sex marriage in all 50 states, including in states where it was banned.
“Whenever you counterfeit something, you cheapen the value of the real thing,” Jeffress says. “And if you expand marriage to, basically, any definition you want – two men, two women, three men and a woman – I mean, if marriage is what you want it to be, why bother to get married at all?”
Jeffress points to a turn-of-the-century Hoover Institute study of Scandinavian countries, where marriage was “dying” in Sweden in Norway but 60 percent of children were born out of wedlock. The study by Howard Kurtz, which generated a 2004 commentary by Dr. Albert Mohler, predicted the United States would eventually experience a decline in traditional marriage as the populace embraced a more liberal definition of what marriage means and what it represents.

First of all, the author of the study was Stanley Kurtz. Someone seems to have gotten him mixed up with a Fox News personality.
Read more »
Posted by BlackTsunami at 4:47 PM No comments: 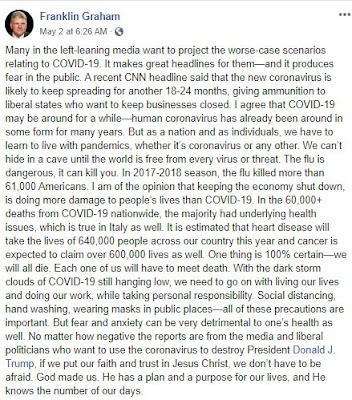 
Instead Of Canceling, This Couple Had A Socially Distant Drive-In Wedding - This was sooo sweet!

Former Pope: Same-Sex Marriage Comes From the Antichrist - Get bent.