Religious right says CA legislation will outlaw the Bible, but didn't they claim the same thing about hate crimes legislation? 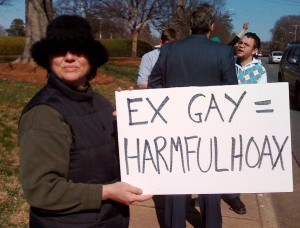 Religious right and conservative organizations such as the Family Research Council are quick to cry about persecution and make predictions about future persecution Christians like them will suffer if certain pro-LGBTQ bills become law.

The ease with which they do it would be funny if it weren't for the fact that they are able to repeatedly do it even when their dire predictions prove wrong.

For example, there is a bill in California which would outlaw marketing or selling the fraudulent practice of ex-gay therapy.  At first, religious conservatives were attempting to portray it as something called a "must stay gay" ban. However, sensing how inane that was, they moved to a familiar lie - claiming that the bill would ban  the Bible.

On several fronts, from the Family Research Council, to the American Family Association's fake news source One News Now, and to other areas, the religious right and conservatives portrayed California's bill as an attack on Christianity.

The claim is a basic lie. According to the fact-finding site Snopes:

In reality the legislation, which was introduced in February 2018 by San Jose-based Democrat Evan Low, enhances California’s already-existing prohibition on “sexual orientation change efforts” (SOCE), commonly known as “gay conversion therapy.” In 2012, the California Assembly passed Senate Bill 1172, which banned mental health professionals from performing SOCE on children under the age of 18.

The law defines SOCE as: “any practices by mental health providers that seek to change an individual’s sexual orientation. This includes efforts to change behaviors or gender expressions, or to eliminate or reduce sexual or romantic attractions or feelings toward individuals of the same sex.”

Prohibit SOCE from being performed on anyone, not only children under the age of 18

Prohibit the advertising or sale of SOCE as a service

. . . Anthony Samson, a Sacramento attorney and policy advisor told us by email that the bill would prohibit conversion therapy “as a commercial service in exchange for monetary compensation,” adding: It does not apply to the sale of books or any other kind of goods, and it does not prevent anyone from speaking or writing on the subject of conversion therapy in any forum.


So again, the religious right pushes a horror story which they claim "could happen" if a pro-LGBTQ law is passed.


Anatomy of a Smear: The Religious Right’s Dishonest Attack On Senator Cory Booker - The religious right weaponized religion in a smear attack on Sen. Cory Booker because Booker asked critical and appropriate questions about Sec. of State nominee Mike Pompeo. This will probably occur more - i.e. the religious right exploiting religion to play the persecution card when asked about their homophobic methods or how Trump is bending over backwards to fulfill their homophobic desires.


HRC Calls on the Senate to Reject Anti-LGBTQ Judicial Nominee Kyle Duncan - AND by making sure there are homophobes on the bench, the religious right hope to win cases without even having to prove their arguments. This always has a way of backfiring on them.