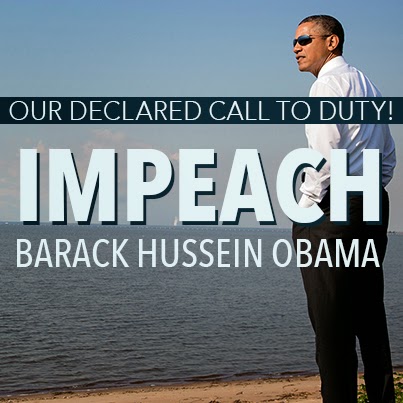 Apparently the anti-gay Liberty Counsel wants first entry in the "Dumbest Move of 2014" contest.  Personally, I didn't know there was such a thing. There probably isn't but thanks to the Liberty Counsel, there is now.

And just what does this group want to impeach President Obama for? Well according to Right-Wing Watch, Liberty Counsel head Mat Staver said the following:

We, the People of the United States of America, demand that the United States House of Representatives draft Articles of Impeachment against President Barack H. Obama for failure to adhere to the authority and rule of law, and for open oppression of our liberties, as defined by the Constitution of the United States of America and its Bill of Rights. … In my nearly three decades of work in the legal field specializing in constitutional law, I have NEVER witnessed a more blatant and consistent disregard for the Constitution as we have seen from this President and his administration! As I have often said, today’s patriotic Americans are facing more oppression from civil government than did the colonial generation! … Together, we can stop this tyranny before President Obama and his “progressive” supporters succeed in remaking the United States of America into a godless, socialist nation! The impeachment petition lists the health care reform law and the Benghazi attack as among Obama’s “high crimes and misdemeanors.”


If none of this make sense to you, then don't be alarmed. It's not supposed to.  Do anything these idiots do make any sense?
Posted by BlackTsunami at 1:57 PM 3 comments:

'Anti-gay pundit: Gay soldiers undermine military because they have to change their diapers' and other Tuesday midday news briefs

Gay Soldiers Undermine The Military Because They Have To Take Breaks In The Middle Of Combat To Change Their Diapers - You all have no idea how I wish this was a satire or parody but Klingenschmitt is serious here. I don't know what's worse - the absolutely awful attack on gay soldiers or the fact that he has Jesus' name emblazoned everywhere while he is making it. This country needs a SERIOUS discussion on what some folks are able to get away with by claiming they are only speaking in accordance to their faith:

California School Officials Debunk Right-Wing Lies About Transgender Student Law - Meanwhile, the transgender student protection bill which some conservatives and the religious right claimed would lead to widespread chaos is . . . NOT leading to any type of chaos at all. Why that would make these folks liars, wouldn't it?

Retired NFL Receiver Destroys Argument Against Gay Players - Nothing like a little common sense to put things into perspective.

No matter how many times an anti-gay study is discredited, one can always count on religious right groups and spokespeople to use it even if they have to disguise it.

Case in point, recent testimony from the Family Research Council's Peter Sprigg in front of the Rules Committee of the Indiana State Senate. Sprigg was testifying in favor of a bill which would ban marriage equality in the state. In a portion of his testimony, he spoke negatively about same-sex families:


And now, the most rigorous research on children raised by parents who had a homosexual relationship, the New Family Structures Study, has shown,

If folks don't recognize this study, it's not a delusion to say that this was what Sprigg had probably hoped. We all know it as the study authored by University of Texas professor Mark Regnerus, i.e. the negative study on gay parenting which has been criticized by experts for several methodological flaws, including the fact that it never really established a link between same-sex households and negative outcomes regarding children.

It's the same study which has also been condemned by a host of experts including the American Psychological Association and over 200 professors and therapists (in fact, those particular experts all signed a letter condemning the study's publication and methodology).

These are all facts that I am sure Sprigg was aware of when he cited the study. But I guess when you are supposedly defending "traditional marriage," other traditions such as truth and integrity are expendable.