Mickey Mouse is NOT holding a penis, my friend 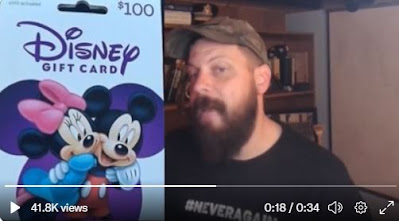 All of these accusations of pedophilia against Disney by Florida governor Ron DeSantis, Fox News, and the rest of the loony right are dangerous on so many levels. Especially how it encourages copycat behavior like below, courtesy of  Right Wing Watch:

"Do you see Minnie (Mouse) in a dress?" asks Oklahoma GOP state senate candidate Jarrin Jackson. "Or do you see Mickey holding a penis?": "The people at Disney are pedophiles." pic.twitter.com/QTNhVnr4xD

So can you see Mickey holding a penis? I don't know and I don't care. I don't make it a practice to look for subliminal sexual images in children's products.  But truth be told, I don't blame this guy for being so ignorantly empowered.
The folks who should be blamed are DeSantis, Fox News, and others who know what power of suggestion they have over some people. And have no problem with perverting it.
Posted by BlackTsunami at 3:37 PM No comments:

Fox News editor covering LGBTQ issues is a conversion therapy proponent who says “transgender identity is dangerous” - LGBTQ people have our work cut out for us when the most popular cable news network is gunning for our equality. This fool is simply another coin in the slot. What's next, Fox? You gonna get David Duke to cover African-American issues?
‘Lie from hell’: Franklin Graham calls for ‘regime change’ in US - Happy LGBTQ people gives Franklin Graham the vapors.
Books By Trans And Non-Binary Authors To Read On Transgender Day Of Visibility 2022 - Amen. We need more education on trans and non-binary lives and issues.
GOP Rep. Lauren Boebert Wants an Age Minimum Before People Come Out - Lauren Boebert can go to that hot place that I'm too much of a gentleman to call by name.
Businesses are speaking out against anti-LGBTQ laws - Good. Get more vocal.
Posted by BlackTsunami at 9:16 AM No comments: