According to the following video, the "cat's is out of the bag" in regards to a group of African-American pastors protesting President Obama's and the NAACP's supporting of marriage equality:

As it turns out, this is not a genuine protest of anger stemming from the African-American community, but rather an astroturfed effort by the National Organization for Marriage. The video is probably the first time NOM has attached its name to this protest, but to be honest, many of us lgbtq bloggers knew that NOM was involved from the beginning..

William Owens, the leader of the Coalition of African-American Pastors (CAAP) -  the group pushing this protest, has been described by NOM as it's "liaison to the Black Church." This is significant for two reasons.

1. Remember that NOM got into trouble earlier this year when it was discovered that the organization planned to create a "wedge strategy" to divide the African-American and gay communities on the subject of marriage equality: 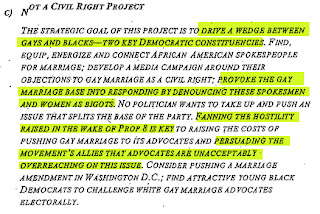 As you can read above, NOM planned to recruit black leaders to speak out in an effort to get the gay community so enraged that they verbally attack these leaders. Then the black community would respond hostilely to these attacks. The end goal is definitely cause confusion between two groups who support President Obama in wide numbers. And that has a lot to do with Reason 2.

“We are proud to endorse Mitt Romney for president,”  (NOM President Brian) Brown said. “Gov. Romney was an early signer of NOM’s presidential pledge which represents his commitment to the nation to take specific actions as president to preserve and protect marriage as the union of one man and one woman.”

In August, Romney was among the candidates who signed a pledge from NOM committing himself to back a Federal Marriage Amendment, defend the Defense of Marriage Act in court and establish a commission on “religious liberty” to investigate the alleged harassment of same-sex marriage supporters.

“Now is the time for all people who recognize the importance of marriage to come together to support a true champion, Mitt Romney, against an incumbent who has done virtually everything in his power to undermine the institution of marriage,” Brown continued.

The point of the CAAP protest is to generate a hostile division between gays and blacks which would help Romney get elected.

And don't be fooled by Owens and other pastors in the video. Odds that they are in on the con.

So as it becomes clear that this protest is yet another attempt by NOM to divide the black and gay communities, we must insist that the media not approach this story half-assed. We must state and insist with every chance we get that the media take the time to tell the ENTIRE story.

But educating people on what's going on with this astroturfed protest would go a long way to prove that while the black and gay communities may have different struggles to reach our goals of equality, we generally have the same enemies with the same mindsets. They see us as either pawns or less than nothing.

It's time that African-Americans and gays stop fighting each other over the subject of marriage equality and recognize when these enemies are trying to exploit us.

Posted by BlackTsunami at 2:47 PM No comments:

As these items from People for the American Way's Right Wing Watch demonstrate, the religious right care less about the children harmed in the Penn State tragedy than they care about blaming it on the gay community:

Fischer: Lesson from Penn State is to Keep Gays Out of the Boy Scouts

In other news (if your stomach hasn't given out on you from reading the above mess):

The latest weapon in our Homosexual Agenda™: The 'Ice Age' movies, of course - A good reason why we call Joseph Farrah's online publication World NUT Daily.

Professional anti-gay Matt Barber: the NAACP has been brainwashed by ‘white sexual anarchists’ - Matt Barber is as crazy as stir-fried cat poop.

Posted by BlackTsunami at 8:53 AM 7 comments:

Very few individuals epitomizes the vileness and absolute absence of moral integrity of the religious right more than Scott Lively.

For the uninitiated, Lively is a long-time foe of the gay community who wrote a discredited book linking gays with the Nazi Party. However, his reputation for homophobia reached new depths after he and a bunch of other American homophobes traveled to Uganda and stoked the country up against the gay community by pushing the false notion that gays are trying to "convert" children.

We all know what happened next. Now Uganda is attempting to pass an ugly bill which would make homosexuality a crime punishable by death.

His recent appearance in Springfield, Missouri was very much part of the latter:

Standing next to a sign reading “Human Rights Commission is a Trojan horse for the gay agenda,” Scott Lively told his audience of nearly 70 that a culture war currently raged between those fighting for sexual anarchy and those fighting for family values.

And with the chairman of the mayor’s human rights commission listening intently in that audience, the noted anti-homosexual rights activist and president of Abiding Truth Ministries exhorted listeners to kill a proposed ordinance extending civil rights protections to gay, lesbian and transgendered people.

“Don’t let this anti-discrimination ordinance go through,” said Lively during his Friday night presentation at The Library Station on North Kansas Expressway. “It’s like chicken pox. It’s in your system forever. You’ve got to kill this thing before it goes in.”

. . .Lively, who said he paid his own way to Springfield to share this message, argued that homosexual activists have capitalized on what he called the black civil rights movement by bundling their rights with those he called “legitimate ethnic minorities” and riding their coattails to social legitimacy.

“Since when is sodomy a civil right,” said Lively, who lives in Springfield, Mass. “It’s a ridiculous, preposterous notion! There’s absolutely no correlation between sodomy and skin color.”

The grand irony of Lively's talk is when he said that the city should have a "family first commission." Of course we all know that if this were the case, Lively wouldn't necessarily think that gay families should be a part of this commission.

It would seem, however, that Lively's talk may have backfired on the folks attempting to keep the ordinance from passing. According to the article, George Davis, chairman of the Mayor's human rights commission was there, but he walked out after hearing Lively's words. And apparently he wasn't one of the only ones. Davis, however, pointed out the myriad of contradictions in Lively's talk:

Davis pointed out that Lively repeatedly said that sex should take place only within the confines of marriage, but he opposed allowing gay and lesbian people to marry. He said Lively argued that society should fight to protect families, but he didn’t believe gay and lesbian people should be able to adopt. He said Lively seemed to suggest that Springfield was overrun with gay activists, but continually asserted to the audience that they were in the overwhelmingly Christian and conservative majority.

Posted by BlackTsunami at 4:59 AM 5 comments: