While it certainly not the practice of this blog to gloat, the news out of North Carolina is just too good not to. The picture above is Pastor Patrick Wooden of Upper Room Church of God in Christ in Raleigh, NC and other celebrating the night in 2012 that Amendment One which banned marriage equality in NC passed.

Well as of today, Wooden has been told by a federal judge where he can stick HIS cell phone.

According to WTVD in NC:

The case is separate from the one being overseen by Chief U.S. District Court Judge William Osteen Jr. in Greensboro. Osteen put off a ruling in that case until Monday.

The amendment to the state constitution banning gay marriage was overwhelmingly approved by voters in 2012.

The U.S. Supreme Court announced Monday it would not hear appeals of decisions striking down similar marriage prohibitions in other states. In July, the 4th Circuit Court of Appeals struck down Virginia's gay marriage ban. The appeals court in Richmond has jurisdiction over North Carolina, and judges here are required to follow its ruling.

Friday's ruling came despite attempts by North Carolina's Republican leadership in the General Assembly to intervene in both cases.

. . . The ruling was met with celebration among scores of same-sex couples who had spent hours lined up at county courthouses across the state, awaiting a ruling allowing them to marry.

Posted by BlackTsunami at 3:19 PM 5 comments:

New Research Sheds Light On Anti-Gay Laws And The Poverty They Instigate - Anti-gay laws not only cause mental stress in the lgbt community, but it also makes us financially poorer. Well duh.

@AustinRuse defames me, pretends to know heart of gay teen (cc @CrisisMag) - Austin Ruse (who has hated my guts since I helped embarrass him after that incident in which he said university leaders should be shot) is now attacking Jeremy Hooper. Oh Austin, you poor bitch.

LGBT Kids Of Color Are More Likely To Be Disciplined In School, Study Shows - Uh this is NOT a good thing.

Pat Buchanan: 'Massive Civil Disobedience' Needed To Fight 'Anti-Christian Discrimination' - Good idea except for the fact that ANTI-CHRISTIAN DISCRIMINATION IS A MERE TALKING POINT AND NOT ROOTED IN ANY REALITY, regardless of how many anecdotes you can pull out of your tuckus.
Posted by BlackTsunami at 9:06 AM 2 comments:

In terms of the marriage equality fight, one thing which helps the lgbt community are those who are fighting against us.

I've divided them into two camps. First, there are the policy wonks like those from the Heritage Foundation and the National Review. They write pieces about the sustainability of marriage and how allowing gays to marry is akin to slavery. They twist incredibly good tangents which showcases their intellectual prowess.

But nothing they say has anything to do with the real world. They offer only hypothetical tangents which loses your interest in the third paragraph unless you already agree with their opinion. In other words, their pieces would never stand up in court against examples of actual same-sex couples and families who are hurt by anti-marriage equality laws.

Then there are folks like West Virginia Family Foundation, who sent out the following message yesterday when marriage equality came to that state. I think it's self-explanatory why we are winning against THAT particular crowd: 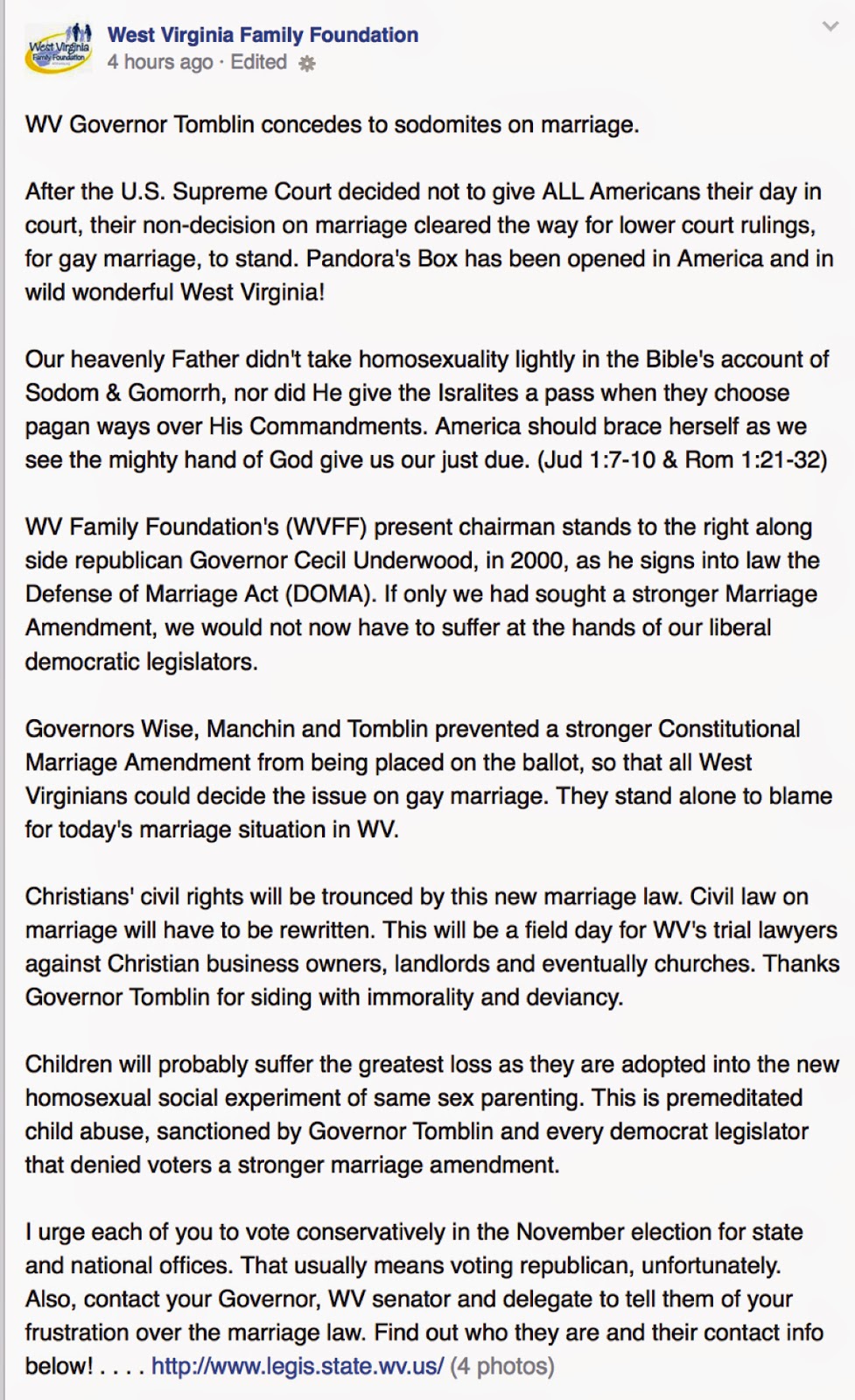 Hat tip to Goodasyou.org
Posted by BlackTsunami at 5:01 AM 2 comments: