For National Youth HIV and AIDS Awareness Day, anti-lgbt hate group the American Family Association decided to push some old, but reliable semantic garbage about gay men and AIDS. What the group actually achieved was to demonstrate a textbook case of the anti-lgbt propaganda which has been used to undermine the fight against HIV/AIDS.

Via an article in its fake news site, One News Now, AFA accused the lgbt community of ignoring what it claims is the root cause for HIV/AIDS:

Today is "National Youth HIV and AIDS Awareness Day," and the message should be going out that sexual behavior is spreading the disease, says a conservative activist.
"I hope that they will point out that it is the behavior that causes AIDS," observes attorney and writer Matt Barber. "That it's aberrant sexual behavior - male on male homosexual behavior - that is the catalyst for this horrible disease, that it is something that can be prevented simply by not engaging in the behavior that causes it."
Homosexual activists say the purpose of the day is to help young people make "informed and responsible decisions" about their "sexual health," and planned activities include a visit to Capitol Hill, a Facebook Live chat, and various programs and events. But a message of self-control is unlikely to get far, however, since homosexual activists downplay their own role and point to heterosexuals and drug users, and blame Ronald Reagan for failing to address the disease early on.

Yet the statistics are hard to ignore. Citing sobering statistics from the Centers for Disease Control, the website for the Human Rights Campaign story about "Awareness Day" acknowledges that HIV rates increased 87 percent among black and Latino homosexuals and bisexuals from 2005 to 2014. The rate increased 56 percent among white men during that same period.

The story blames a lack of "comprehensive sex education," "stigma" about HIV infection, and "feelings of isolation" as barriers to preventing HIV/AIDS.

The truth is that AIDS is a "gay disease" because it has disproportionately devastated the homosexual community, columnist David Benkof, who is homosexual, wrote in a February column at The Daily Caller.

Homosexual activists, he explains, claimed that "AIDS is not a gay disease" at a time when they were fighting "haters" who misunderstood the virus. He writes:

But of course AIDS is linked with homosexuality. Even today, gay men receive more than two-thirds of HIV diagnoses, and earlier in the epidemic that number was even higher. Gay men are maybe 2 percent of the American population, but 55 percent of Americans living with HIV.

Benkof goes on to admit that HIV has spread so quickly because homosexual men have multiple sexual partners.


Notice the deception here. The One News Now article cites CDC data with regards to statistics about HIV/AIDS. However, the article's author chooses to then discard the reason for the CDC statistics (lack of comprehensive sex education, "stigma about HIV infection, feelings of isolation), even though the reasons themselves come from the CDC.

It used to be back in the day when religious right groups cited negative gay statistics, they would omit the reason for these statistics if it didn't fit their ugly narrative about lgbts. Thanks to intrepid bloggers like myself, they now acknowledge the reasons, but then verbally undermine them.

This leads me to ask why should groups like the AFA even bother citing the CDC in the first place? It shows blatant dishonesty to use statistics to craft a narrative, then discard reasons behind said statistics because they refute the case you are making.

And what makes AFA's blatant lying even worse is who the organization chooses to refute the research it doesn't like. David Benkof is columnist who, as far as I know, has no background in medicine or research. A columnist whose big "add" to the article is that he is gay and published a piece in a  right-wing publication.

Matt Barber is even worse. Many, myself included, have written extensively  about the various ways he has attacked the lgbt community, including his vile fascination with talking about the so-called mechanics of gay sex (or as Barber puts it - "one man violently cramming his penis into another man’s lower intestine and calling it ‘love'").

Barber is a veritable treasure trove of homophobia,  including when he:

said that marriage equality is about "persecuting Christians,"

implied that he was sent by God to tell gays that HIV was a punishment for sinning.

So that's who the American Family Association has to refute the Center for Disease Control information which doesn't comport with the narrative it is trying to create about gay men and HIV/AIDS - a gay columnist with no medical background and a religious right spokesman who seems to have an obsession with gay sex on the level that some like to claim that gay men have for Barbara Streisand.

It's important to realize that what the AFA spewed by way of One News Now isn't information designed to educate or spread truth. The article was created to justify prejudice and homophobia. It was created to demonize, stigmatize, and isolate, i.e. creating and exploiting conditions which the CDC has clearly said contribute to the spread of HIV/AIDS.

If we are to have an honest debate about HIV/AIDS, how the AFA and other religious right groups distort information and spread propaganda  must be included as one of the topics.

Posted by BlackTsunami at 5:59 PM No comments:

How Wonder Woman Saved A Gay Boy’s Life - WONDERFUL story which resonated with me because I played Wonder Woman as a child. Sue me already, but the male superheroes were so boring.

Chechnya has opened concentration camps for gay men - We've got a problem in Russia. A SERIOUS problem.

Hawaii LGBT couples seek equal access to fertility treatments - I agree with this and fortunately the religious right haven't gotten their grubby mitts of opposition on this . . . yet.

Marriage Equality May Provide “False Sense of Security” About Parental Rights - Unfortunately, it isn't just parental rights which receive the false sense of security.
Posted by BlackTsunami at 9:09 AM No comments:

From the Department of "I Didn't Know They Were Still Around" comes an old adversary of the lgbt community taking credit for Neil Gorsuch becoming the latest Supreme Court justice: 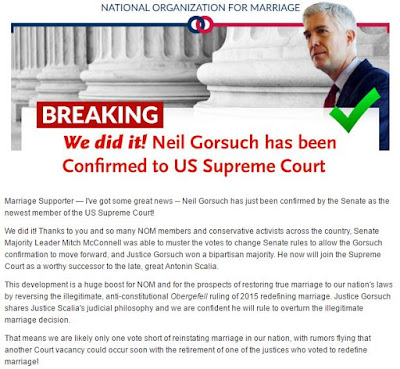 While I've always been one to advise folks to never discount anything, I feel safe in saying that a refrigerator containing cobwebs and a bottle of gin  has more credibility AND relevancy than NOM right now. The organization really didn't do anything to get Gorsuch confirmed. NOM's gloating is merely a thinly disguised ask for donations:

Our push for the confirmation of Justice Gorsuch made a real difference, but has depleted our funds. Please make a financial contribution today to help us replenish our coffers. Thank You.