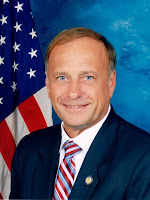 Congressman Steve King (R-Iowa) has a history of making ridiculous comments but today's attack on President Obama takes the cake:


During an appearance on G. Gordon Liddy’s radio show this morning to discuss Arizona’s immigration law, King suggested President Barack Obama was a racist and “favors the black person” while carrying out his presidential duties.

. . . “When you look at this administration, I'm offended by Eric Holder and the president also, their posture. It looks like Eric Holder said that white people in America are cowards when it comes to race,” said King. “And I don't know what the basis of that is but I'm not a coward when it comes to that and I'm happy to talk about these things and I think we should.”

King added: “But the president has demonstrated that he has a default mechanism in him that breaks down the side of race - on the side that favors the black person.”

I'm pretty sure Fox News, particularly John Stossel, will bend over backwards to defend or trivialize the absolute offensiveness of King's remarks.

But his comments are significant not only because of their inanity but especially when one takes into account that King isn't exactly a friend of the lgbt community.

For one thing, he has no problem in associating with anti-gay hate groups such as Mass Resistance in Massachusetts.

For another thing, it was his office which sent President Obama a letter asking for the dismissal of  Education Dept. appointee Kevin Jennings partly on the grounds that Jennings facilitated the sexual abuse of an underaged teen.

This letter was sent out even after King's office was informed that the charge was bogus.

While this argument festers resentment, people like Rep. King are putting both communities in the same boat and drilling holes in its bottom.

Perhaps it would best serve both the lgbt and African-Americans communities to stop squabbling over  symbolic positions and instead recognize their common enemies . . or learn how to tread deep waters.

Posted by BlackTsunami at 3:37 PM No comments: Links to this post

Police: Two Marines beat gay man near Johnson Square in downtown Savannah - According to the two losers in question, the man "winked" at them. The victim of their nonsense said that he merely squinted. Two things - 1. I'm inclined to believe the victim. 2. What the hell difference does that make what he did?

Hatch says he was trying to praise gay activists - Senator Hatch, compliments like that are NOT what we need.

Dobson Gets Back In The Game - Olivia deHavilland said it best - "you just can't keep hogs away from the trough."

A sad flashback for Monday morning


I found this clip last weekend and felt that I had to post it.

Back in the day when the AIDS crisis was at its beginning stage, there was a lot of ignorance out there. Granted, there is still so much ignorance but geez, it awful back then.

The clips is a segment of the talk show Donahue in which several guests talk about the disease. One of the guests is comedian Stephen Stucker (Airplane) who at the time was suffering from it.

What struck me about this clip is Stucker's behavior. Some folks may call him highly inappropriate or demeaning. I disagree. Here is a man who is facing a disease, which will kill him. At the same time he has to cope with that, he has to educate the public who, as you can see by some of the ignorant questions and comments, allowed their hysteria to rule their senses.

I guess the clip is a reminder that we must never forget those who came before us and who died while valiantly fighting fear and ignorance.