Do anti-LGBTQ hate groups know our meaning of the word 'receipts?'

The American Family Association is angry at CNN for daring to refer to them as an SPLC-designated hate group.

This week, CNN listed the American Family Association as a "hate group" in a sham news article that could easily incite violence and place AFA employees and supporters in harm's way. CNN has since issued a correction and removed AFA by name off their website. Instead, CNN links to the Southern Poverty Law Center website which falsely lists AFA as a "hate group." AFA is urging CNN to stop using the Southern Poverty Law Center (SPLC) as a source when reporting real news. The SPLC is a radical organization whose hateful rhetoric was implicated in a 2012 shooting at the Family Research Council's headquarters in Washington, D.C. Today, we need your support to sustain our efforts in this important and lengthy battle. By citing the SPLC, CNN underscores why many Americans don't trust it for honest reporting. The SPLC has been widely discredited over the years because of its false labeling of Christian organizations as "hate groups.


AFA even has the nerve to ask that folks tweet the following mess: 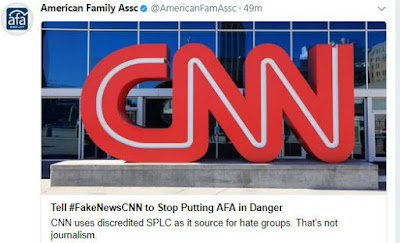 Earlier today in my news brief, I talked about the Family Research Council throwing a tantrum because Apple will be donating a large amount of money to anti-hate groups, including SPLC.

And it's not just those two. According to People for the American Way:


It appears as if there is a coordinated campaign from anti-LGBTQ Religious Right organizations to fight back against outlets that identify them as SPLC designated hate groups.


My guess is because of Charlottesville, there is an interest in learning more about hate groups in America. And in spite of what some folks have said about SPLC being discredited, the organization is the best resource on hate groups. Anti-lgbtq hate groups are rightfully figuring out that a lot of eyes will be looking at the info SPLC has compiled on them. Therefore they are attacking SPLC's credibility.

These groups  are merely digging a hole for themselves. And for a very simple reason.

Read more »
Posted by BlackTsunami at 5:21 PM No comments:

Apple to donate $2 million to anti-hate groups, Tim Cook tells staff - One of the groups receiving donations will be the Southern Poverty Law Center. Naturally the Family Research Group (who SPLC has called a hate group) isn't happy about this: 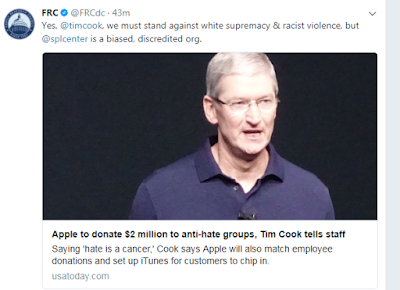 That's the Family Research Council - a group which heavily supports Donald Trump, hasn't say a word about him this week defending white supremacist groups, and will most likely still have him at it's so-called Values Voters Summit

Yes, A Big Victory In Texas On The Trans Bathroom Bill, But The Battle Is Far From Over - Yep. Never over. Bring it on.