One would think that in light of all the scrutiny paid to the hypocritical support religious evangelicals give Donald Trump, they would be in a position of hiding or at least self-examination.

Not hardly. In spite of admissions that they only support Trump and defend his many bouts of behavior because of the power he gives them, religious evangelical leaders seem to want us to pretend that there nothing wrong with what they are doing.

Case in point is Franklin Graham. Today, he posted the following on his facebook page: 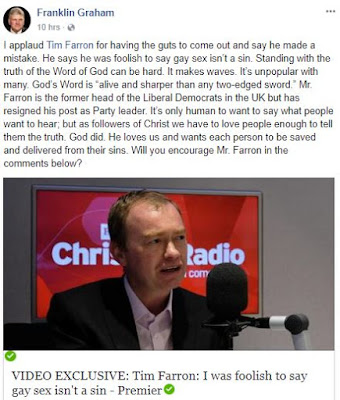 Finally, when pressed by about past comments he made claiming that America has a "sin problem," Graham said Trump wasn't perfect.

Keep it up, Mr. Franklin. Don't think people neither see nor know what you are doing. Dig that hole and when it gets deep enough, enjoy not being able to get out of it.

Posted by BlackTsunami at 4:42 PM No comments: 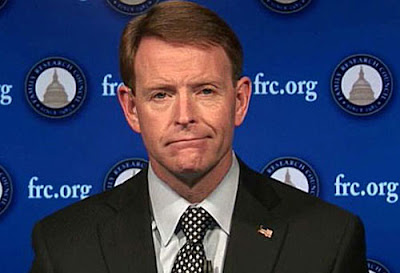 The Family Research Council head says that evangelical conservatives are willing to overlook Trump’s past behavior so long as he delivers for them on policy - So many things to unpack from this article:

1. Without a degree of shame, Tony Perkins of the Family Research Council admits that the religious right are willing to overlook Trump's un-Christian behavior if he continues to give them what they want in terms of policy - i.e. the power to control people's lives and divert the direction of this country, less healthcare for women, and an undermining/reversal of the LGBTQ equality and safety. I always knew this. So many others already knew this. However. it's amazing to hear Perkins simply admit that all of the religious right's talk about a "moral crisis" in America over the years was a big fat lie.

2. If Perkins is accurate, evangelicals do not like John McCain and, just like Trump, don't view him as a war hero because he got captured.

3. It's not just that evangelicals will overlook Trump's bad behavior. As shown in the article, they sometimes give justifications & lies about his bad behavior

4. The religious right should never get to demonize the LGBTQ community ever again without being strongly and repeatedly reminded of this moment.

Evangelical conservatives surrendered moral authority to Trump. They don't deserve to get it back.- A perfect time to remind folks about last night's post.

Here Are the 2018 GLAAD Media Awards Nominees - Congratulations to all of the nominees, including several of my friends for their nominations in the category of 'Outstanding Blog.' Having been nominated three times and winning one last year, I know how much of a thrill this is. Enjoy it because y'all deserve it.

Laverne Cox Makes History As Cosmopolitan’s First Transgender Cover Girl - Not bad. Not bad at all.
Posted by BlackTsunami at 9:19 AM No comments: