The situation with Libs of TikTok accusing LGBTQ people and teachers of being pedophiles takes me back. There was an article which pointed out how Anita Bryant in the 1970s was probably the first person to harness the lie into political power.

But she certainly wasn't the first to exploit the lie. In 1961, there was an educational film shown to students called Boys Beware:

Shot in 1961 BOYS BEWARE was shot in the Los Angeles suburb of Inglewood, California and produced with the cooperation of the city's police department and the Inglewood Unified School District, is narrated by a police detective who is on his way to a school meeting to discuss the issue of sexual predators that attempt to lure young adolescent males. It not only shows basic misunderstandings about homosexuality but also attempts to prejudice the community against homosexuals who are portrayed as predatory at best, and basically as anti-social and evil.

It's a rather ridiculous film and can be seen as comedically ludicrous now. That is until you realize how the ideas it presents have been constantly recasted and believed by so many.

Posted by BlackTsunami at 5:15 PM No comments: 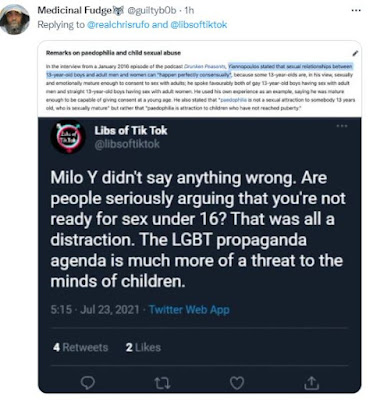 The real victims in the “Libs of TikTok” discourse are the teachers and LGBTQ people harassed because of the account - A certain Twitter address is getting what it deserves but conservatives are trying to make it the victim. Once again for the liars in the back, Libs of TikTok gained a massive following by reposting videos while falsely framing folks in the videos as groomers and pedophiles. The creator of the Twitter address has no right to anonymity.
The most damaging myths about transgender kids​ - Easily one of the most important pieces you will ever read.
Ohio University to Pay $400K to Professor Who Rejected Trans Student’s Pronouns - Only because the university chose to give in. It decided NOT to fight. Take a lesson and learn how not to behave.
DeSantis calls on Legislature to kill Disney's special self-governing status - Ronnie has his eyes on the White House and is set on using Disney and LGBTQ people to get there. He should be watching where his feet are headed.
NCAA gymnasts are using the hashtag #FlippingExhausted to protest anti-trans legislation - Good for them!
Posted by BlackTsunami at 9:08 AM No comments: