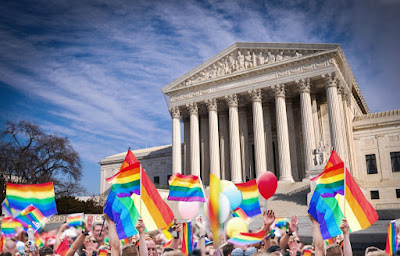 So many of us repeated the simple fact that "religious liberty" or "religious freedom" as defined by the anti-LGBTQ evangelical right was not simply about a cake or a bakery or participation at a same-sex wedding. Those trite things were merely the beginning of a plan to codify anti-LGBTQ discrimination by using religion as a weapon.

According to a recent events,  things have moved steadily from businesses supposedly not wanting to participate in same-sex weddings. We are now talking about senior living communities who don't want to house gay couples:

A St. Louis County senior community has denied housing to a married lesbian couple who have been together for nearly four decades because of the couple's sexual orientation, according to a lawsuit filed Wednesday in U.S. District Court.

Mary Walsh, 72, and Bev Nance, 68, both of Shrewsbury, say the Friendship Village senior living community, which has locations in Sunset Hills and Chesterfield, denied occupancy to the couple to live at the Sunset Hills community in 2016 because their relationship violated its cohabitation policy that defines marriage as "the union of one man and one woman, as marriage is understood in the Bible," according to the lawsuit.
The policy, the suit says, violates the Fair Housing Act and the Missouri Human Rights Act. It names Friendship Village and its parent company FV Services Inc. as defendants. The couple is represented by the San Francisco-based National Center for Lesbian Rights, the American Civil Liberties Union and the Washington D.C.-based firm Relman, Dane & Colfax.

Walsh and Nance were married in Massachusetts in 2009 but have been together for 37 years, their suit says. They tried to move to Friendship Village in July 2016, got on a waiting list and paid a $2,000 deposit but were later told they couldn't because of the "longstanding policy." Friendship Village continues to enforce the "cohabitation policy" that has denied housing to other same-sex couples, the suit claims.


And let's not forget the laws in Kansas, Oklahoma, and South Carolina, as well as a bill moving through the House of  Representatives which contains an amendment that, under the grounds of "religious liberty," allows foster care and adoption agencies to discriminate against gay couples while still being able to receive tax dollars.

In a letter to Senate appropriators, the senators slammed a House Republican proposal passed earlier this month that would shield taxpayer-funded adoption and child welfare agencies that refuse to provide services to children and parents on the basis of religion, LGBTQ status, or family structure. The senators urged the Senate Appropriations Committee not to include this dangerous proposal in the upcoming appropriations bill.

“Allowing child welfare agencies to close the door to willing and fully qualified foster and adoptive parents due to a difference in religious belief opens the door to taxpayer-funded discrimination and deprives vulnerable children of safe and loving homes,” the senators wrote. “We strongly encourage you to reject this language and instead, support federal laws and regulations barring discrimination, and protect the rights of all qualified parents who answer the call to foster and adopt children in foster care.”

The proposal would allow the Department of Health and Human Services to withhold federal funding from states that prevent child welfare agencies from denying services to LGBTQ parents or children, penalizing states with existing nondiscrimination policies. Late last week, over 100 child advocacy organizations sent a letter to Congress opposing this proposal.


And I am certain that there will be more instances to come in which the anti-gay evangelical right will weaponize religious beliefs  against the LGBTQ community. You can count on that.

Posted by BlackTsunami at 5:03 PM No comments: 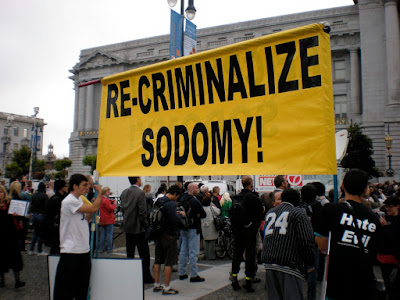 The Religious Right Appears Intent On Criminalizing Gay Sex Again - A recent column by Tony Perkins of hate group The Family Research Council has Michelangelo Signorile wondering are religious right groups wanting to bring back the sodomy laws. While it may seem hysterical, I say, from monitoring religious right groups for close to 12 years,  that nothing is for sure and one should never assume. When it comes to these groups, it's all about audacity. No matter how ridiculous the cause may seem, if they think they can succeed, they will put forth a huge effort and at the very least, we would have to deal with debating issues which we never thought we would. Personally, I feel that if these groups want to bring back the time in which they openly and freely cited discredited studies by charlatans who accused us of stuffing gerbils up our rectums, feel free.  We got receipts regarding all of the lies groups like FRC once told about us. And we haven't forgotten a single thing.

GLAAD calls for increased and accurate media coverage of transgender murders - Siiigh! Our transgenders sisters are being murdered across America and it's not being handled like it should. We need more press coverage and at the very least, can the media not misgender our sisters.

Trump's Timeline of HATE - Trump has been screwing up everyone who isn't white and straight. Makes me wonder if this nonsense with tariffs is his way to not make THEM feel left out.

Oklahoma woman offers to be a stand-in mom at LGBTQ weddings - Awwwww! This is so sweet!
Posted by BlackTsunami at 9:11 AM No comments: