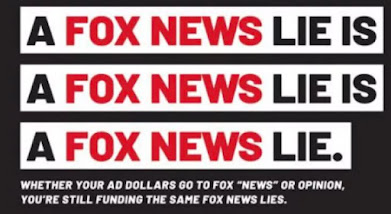 It should be of no surprise to anyone that Fox News amplified the attacks against children's hospitals. Network pundits practically rolled out the red carpet for the folks spewing lies that these hospitals were giving  trans children hysterectomies.

While children’s hospitals were facing a deluge of violent threats in August from an online campaign of intimidation and misinformation fueled by anti-LGBTQ trolls, Fox News repeatedly provided a platform for the individuals responsible for the harassment to amplify their attacks. Over the course of two weeks, Fox News — the most-watched cable network in the country — spent more time and ran more segments targeting three different children’s hospitals over false claims about gender-affirming care than CNN or MSNBC combined spent discussing the attacks.
Led by conservative social media figures including Chaya Raichik and Matt Walsh, an online campaign began by targeting Boston Children’s Hospital and Children’s National Hospital in Washington, D.C.,with false claims that they were providing hysterectomies for trans youth. The unsubstantiated claims were debunked by independent fact-checking websites and refuted by the hospitals, which did not stop right-wing media figures from taking up the attacks to malign all gender-affirming care for trans youth as “mutilation.”
In reality, these hospitals do not provide genital surgery to trans youth. Rather, they follow the standards of care established by national medical organizations, offering medically necessary care that is supported by every major medical organization in America.
. . . Amid the influx of threats against children’s hospitals, Fox News adopted the attacks as part of its ongoing effort to demonize trans health care for political points and at the expense of trans children.
Between August 18, when the network’s first segment attacking Boston Children’s Hospital aired, and August 31, when Fox aired its most recent segment, attacking Chicago’s Lurie Children’s Hospital, the network aired 7 segments and spent more than 20 minutes vilifying the hospitals. Notably, three of the Fox prime-time shows featuring the attacks are in the top 10 most-watched cable news programs in the country — Tucker Carlson Tonight, The Ingraham Angle, and Jesse Watters Primetime.
And while other Fox News prime-time shows similarly repeated anti-trans attacks on the children’s hospitals, Tucker Carlson’s program has been the most responsible for amplifying the misinformation campaign and the figures behind it.

The above excerpt is merely the beginning. Media Matters brings the receipts and this later may prove important. Fox News already has one lawsuit biting its ass. Another lawsuit calling out the network's sketchy relationship with truth would be lovely as far as I'm concerned.
Posted by BlackTsunami at 5:05 PM No comments:

'Peppa Pig' Introduces First Same-Sex Couple — Two Polar Bear Mommies — to Children's Show - Wonderful because same-sex families raising kids is a reality which needs to be seen and amplified. And the religious right freak out sure to come is simply icing on a delicious cake.
Trans Floridians sue to block Medicaid rule excluding gender-affirming care - Good for them. I hope they win.
Federal lawsuit challenges Oklahoma anti-transgender bathroom law - Good. Another lawsuit via our side.
Ted Cruz says he will vote against marriage equality bill​ - Well duuuuuh.
Ben Shapiro accuses California of “allowing people to attempt to kidnap kids and gender change them” - That people like Ben Shapiro are considered great minds by anyone signals the fall of this country's intellect.
Posted by BlackTsunami at 9:08 AM No comments: