Thanks to comments from obnoxiously vile news personality Erick Erickson, we were treated to what's wrong with both American journalism and Christianity.

In a post for his RedState.com blog this morning, Erickson assails a new ad highlighting the GOP’s support for budget cuts that crippled the agencies charged with leading the response to Ebola. Over the weekend, National Institutes of Health director Dr. Francis Collins told the Huffington Post’s Sam Stein that 10 years of stagnant spending on the agency has “slowed down” critical research. As Stein reports, the NIH’s budget in fiscal year 2004 was $28.03 billion. In 2013, it was just $29.31 billion — “barely a change, even before adjusting for inflation,” Stein notes. A Democratic bill to boost the NIH’s budget to $46 billion by 2021 isn’t likely to advance anytime soon.
But Erickson pooh-poohs the budget cuts to agencies like the NIH and the Centers for Disease Control. All the evidence you need that the agencies have plenty of cash, he argues, is in some of the research items they’ve funded.

Erickson’s post, titled “Fat Lesbians Got All the Ebola Dollars, But Blame the GOP,” cites an NIH-funded study examining why lesbians confront higher rates of obesity; the research is in line with other demographic studies examining public health challenges, but Erickson seized on the study to wage a demagogic attack on the agency for frivolously “studying the propensity of lesbians to be fat.” He also attacked CDC research on gun violence and smoking cessation.


No doubt some folks will be attempting to pick "sense" out of nonsense and accuse me of not focusing on the content of Erickson's argument instead of the words he uses.  I'm not going to argue the content of an argument fueled by nasty words and neither should anyone else. An intelligent debate doesn't begin with slurs.

But more to the point, where is the accountability here? I don't mean Erickson's employer, Fox News. If that den of propaganda began showing any accountability, Erickson would have to get in line when it comes to employees who should be reprimanded for ugly slurs.

I'm talking about from other journalists. Where is the outrage from folks who do care about this business and what image it presents?  There is none. Erickson will probably continue to be cited, quoted, and respected in some quarters as a legitimate journalist.

And even more than that, Erickson has on more than on occasion attacked the lgbt community on the belief that we are sinning against God.  He even spoke at the 2014 Values Voter Summit, the annual event put on by the Family Research Council, a group which claims to stand for Christian values. Naturally FRC, as well as other so-called morality Christian groups, are conveniently silent about Erickson's anti-lesbian slur.

In case the irony escapes you, that means Erickson believes homosexuality to be a sin, but slurring lgbts is cool with God.

All in all, any journalist or Christian who cares about integrity and credibility would be embarrassed to be associated with someone with no taste, no class, no dignity, and absolutely no sense of how hypocritical he is. One would think that they would bend over backwards to disassociate themselves from a  sexist, homophobic shithead who should thank God that he has more chances in the journalism business than the proverbial cat has lives.

But sadly, such aspirations of virtue are only a dream in many quarters of American journalism and Christianity.

Posted by BlackTsunami at 3:02 PM 2 comments:

It's my great pleasure to announce that it's been a crappy two days for the Family Research Council and its president Tony Perkins:

Tony Perkins: We 'know' from social science that children do best with a mom and a dad - But now Politifact has revealed that the statement he made regarding social science was false. And the condemnation was especially brutal because it included taking a look at anti-marriage equality arguments on FRC's webpage and refuting them all.

Vatican Proposes Dramatic Shift In Attitude Towards Gays, Same Sex Couples - I will believe it when I see it.

School District Responds To Fox News' Misinformation About Transgender Student Recommendations - Sigh! I keep telling people that truth doesn't matter as long as the lie has more avenues to travel and more people to give it credence.

GOP Civil War: Huckabee Demands Republicans "Grow A Spine" And Oppose Marriage Equality - Poor Huckabee. He is still talking bout fortifying the palace even though the bulldozers are knocking down the walls.
Posted by BlackTsunami at 9:10 AM 1 comment:

You can mark down Massachusetts hate group Mass Resistance as one of the many anti-gay groups furious over the pro-marriage equality developments of last week.

As overwhelming as the “gay” blitzkrieg was, it would not have been successful without the terrible incompetence of the lawyers on our side. This included pro-family lawyers, state attorneys general, and even private lawyers hired to assist.

It's painful for us to discuss this. We are reluctant to sound unkind to the pro-family legal people who worked hard on these cases. But this is such a horrible outcome that something must be said.

. . .  Many conservatives were furious at the nasty manner that Federal Judge Richard Posner slapped down the arguments from the lawyers of Wisconsin and Indiana. The pro-homosexual press certainly had a field day with it. But if you read the reports carefully, you can almost feel a bit of empathy for Posner having to listen to pathetic legal arguments that never went beyond “marriage is a tradition” or that “ it’s about the welfare of children.”

It’s especially frustrating to know that there are so many excellent and unassailable (albeit not “politically correct”) arguments and facts about homosexual behavior that were never used.

The pro-family lawyers refused to consider using the vast storehouse of medical dangers, diseases,  psychological problems, addictions, domestic violence rates, multiple partners, “gay pride” perversions, or suicidal behavior, etc. associated with homosexuality, as counter-arguments. They wouldn’t bring up natural law or morality. They certainly would not talk about the emotional trauma suffered by children growing up around homosexual behavior. Nor would they talk about the ex-gay movement (proof that homosexuality is not inborn) and the changes that come with healing.
Instead our side came up with only soft arguments like "every child needs a father and a mother," “marriage is about procreation, ” the need to respect “the long history of traditional marriage,” and similar blather. In fact, many lawyers on our side accepted civil unions as a reasonable alternative and had no argument against homosexual "parenting" — which made their "mother and father" argument impossible to defend.


. . .  You can mark this down as historic. It's probably the first (and only) time I partly agree with Mass Resistance.

The group wants the softer, kinder, and gentler Maggie Gallagherish talking points and marriage equality replaced with hard driving anti-gay talking points about alleged gay sex habits and diseases, talking points which was immensely popular in the 80s and 90s. 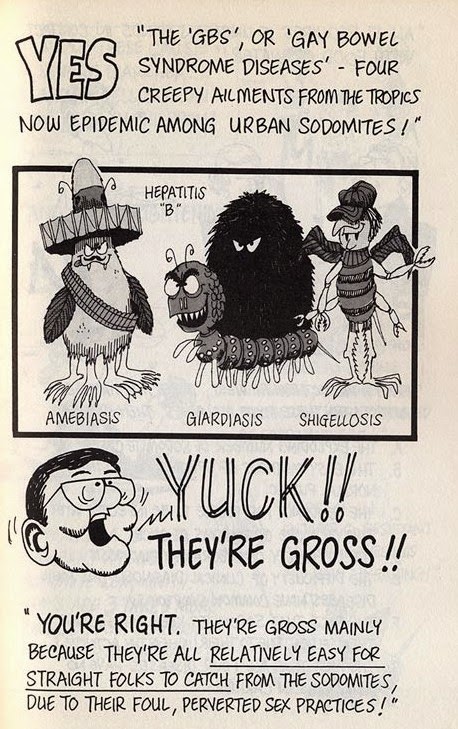 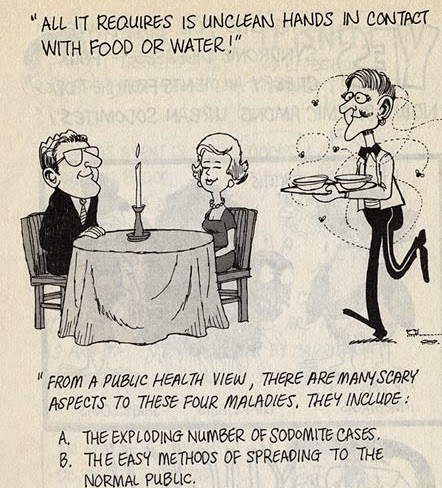 Poor Mass Resistance. The organization is oblivious to a fault. Granted, it was right on the first point that talking points and arguments used by those against marriage equality were useless arguments which couldn't move a leaf down the street.

It's a giant fib created by anti-gay groups over the past decades from a combination of junk science, cherry-picked legitimate science, urban legends taken as truth, and just basic out-and-out lies.

That's why it couldn't be used in the courts.

Anti-gay groups did use these lies in the marriage equality fights and that's how they won victory after victory when it came to public votes. However, in the courtroom, things became different. They couldn't use that crap in an arena where they would be questioned regarding its veracity.

And now you begin to see the hole these anti-gay groups dug for themselves.  It's a hole which continues to be filled with every court victory we receive.