According to Media Matters, Fox News personality Tucker Carlson hosted the head of a fake medical group (and an SPLC-designated hate group) on his show to spin lies about the transgender community:

Fox News’ Tucker Carlson hosted Dr. Michelle Cretella, president of the anti-LGBTQ hate group American College of Pediatricians (ACPeds), on his show to attack transgender children, their parents, and their doctors. During the appearance, Cretella spread anti-transgender junk science and said transgender children are “engag[ing] in magical thinking” and that treating them is “child abuse.” ACPeds is a small, deceptively named hate group, with only a few hundred members, meant to be confused with the American Academy of Pediatrics (AAP) -- a 60,000-member group comprising “leaders in the professional field.” According to the Southern Poverty Law Center (SPLC), ACPeds hides “under the veneer of its professional-sounding name and claims” in order to “defame and discredit LGBT people, often by distorting legitimate research.” ACPeds began when a “small group of anti-LGBT physicians and other healthcare professionals broke away” from AAP after it began supporting the right of same-sex couples to adopt and foster-parent children. ACPeds has been relentless in its claim that it’s dangerous for children to identify as LGBTQ; its blog has suggested that “P for pedophile” should be a part of the LGBT acronym, and the ACPeds president sent a letter to more than 14,000 school district superintendents advocating for conversion therapy and outlining the so-called “health risks” of “claim[ing] a ‘gay’ identity.” Conversion therapy is a dangerous practice that has been “rejected by every mainstream medical and mental health organization for decades.”


Needless to say,  I was not happy when I heard this. A long time ago, I said that the Fox News Network was especially dangerous to the LGBTQ community because sooner or later, it would allow phony medical groups to repeat homophobic junk science unchallenged. And now we are seeing it come to pass. No doubt some folks will complain and if the complaints become numerous, Carlson will play the "We are merely having a debate. What's wrong with debating the issues" card.

Fair enough. Let's have that debate. And let the subject of the debate be the history of ACPeds because I've written in the past about this group's efforts to shove homophobic lies into the realm of legitimate science.


In a 2010 Huffington Post article, I wrote about how the organization peddled to school districts nationwide  a webpage entitled Facts About Youth  . ACPeds portrayed Facts About Youth as a way to help youth by combating the so-called "politically correct" view of science which serves to "affirm unhealthy lifestyles as normal behavior."

That's merely a fancy way of saying ACPeds is about to hit you with all sorts of homophobic nonsense like the following:


The above statement is still on the webpage.

It gets more interesting. I pointed out at least six major errors in ACPeds' Facts About Youth webpage, including:

1. Facts About Youth repeats the lie that a Canadian study proves that gay men have a short life span, even though in 2001, the researchers of the study said their work was being distorted.

2.  Facts About Youth repeats the lie that the Robert Spitzer study proves homosexuality to be changeable, excluding the fact that Spitzer has said on more than one occasion that his research was being distorted.

3. Facts About Youth repeats the claim that Dr. Francis Collins stated that homosexuality is not hardwired by DNA. The truth is Francis Collins never said this. In fact, Dr. Collins said his words were being distorted.


And sadly, none of these errors have been corrected.

I doubt Carlson will have the journalistic integrity to have an actual debate regarding ACPeds and I'm sure that Fox News will be interviewing other representatives from phony medical and anti-LGBTQ groups in general.

So I guess this post is to serve notice. Every time Fox News attempts to give these homophobes any authenticity, there will be a push back of facts. Facts never stay buried.

Posted by BlackTsunami at 4:53 PM 3 comments: 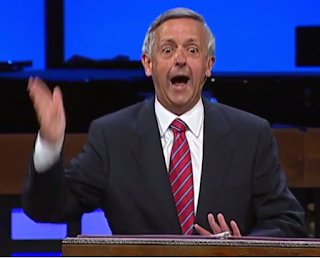 Trump’s Evangelical Team Defends Kushner Against Russian ‘Nonsense’ - The white evangelical sell-out of America is complete. I guess God smiles on possible unscrupulous actions to win an election when you are trying to save a country from "evil liberals" and the "oversexed homosexual agenda." Check the list in the link. Many of these folks on Trump's evangelical team' have spoken out against the LGBTQ community. I personally think they should have stayed out and let the investigation play out. Instead they chose to interject so as to sway people against it.

89-Year-Old Man Tearfully Recalls Impact UK’s Anti-Gay Laws Have Had on His Life: VIDEO - Our history must always be told. All of it.

Rose McGowan's new short film, Ruth, tells the story of Ruth Coker Burks, an Arkansas woman who cared for hundreds of dying gay men. - I love this!
Posted by BlackTsunami at 9:13 AM 1 comment: