Evangelical conservatives are determined to go down in disgrace with Trump. Let them do it.

As the walls of impeachment are slowly but steadily closing in on Trump, one group of his supporters remain blissfully and probably deliberately unaware of what's happening and how Trump's behavior contributed to the state he's in.


We had a great day @WhiteHouse with faith leaders. We talked & prayed with President @realDonaldTrump in the Roosevelt Room. I’m thankful that we are given the opportunity to discuss important policy issues and always the President ask us to lay hands on him and pray. pic.twitter.com/Jua6jouqgp
— Jentezen Franklin (@Jentezen) October 29, 2019 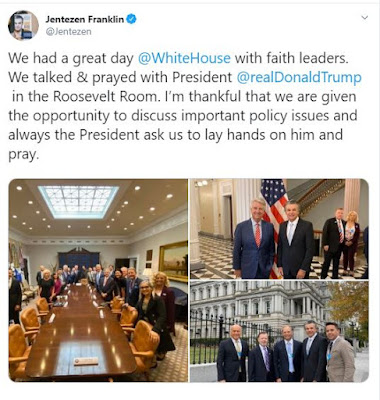 Here is a larger view of the photo on the left: 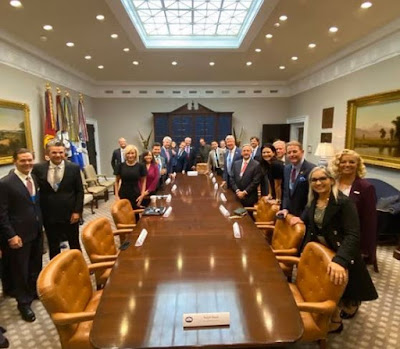 This "event" took place on the same day that Lt. Col. Alexander Vindman provided key evidence in the impeachment inquiry of Trump. The evidence has to do with Vindman listening in on a telephone call in which Trump allegedly was attempting to pressure Ukraine's president into investigating former VP and Democratic front runner Joe Biden and his son, Hunter.

Apparently in between being prayed for, Trump took time out to viciously attack Vindman, an attack which seems to have been in coordination of right-wing Trump supporters. They have been implying that Vindman, a Purple Heart recipient, was lying to take Trump down. Needless to say, the attack backfired as many, including GOP Senators and Congressional leaders, came to Vindman's defense.

Of course I wouldn't ask any of these pastors in the photo about all of that because they would probably formulate an excuse for Trump's behavior.

Read more »
Posted by BlackTsunami at 5:42 PM No comments: 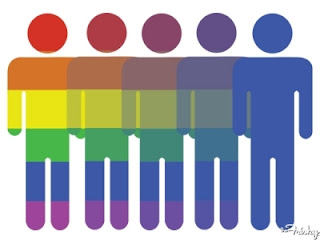 Ex-gays are going to D.C. to lobby against LGBTQ laws - Old lying trash in a new package. We need to find out who is funding this mess.

Homophobia and cyberbullying: Strategies the Cuban government uses against LGBTI+ journalists - The struggle is real, y'all.

Posted by BlackTsunami at 8:29 AM 2 comments: