Outtakes - The images I couldn't put in 'How They See Us'

My booklet, How They See Us: Unmasking the Religious Right War on Gay America, is very popular on Scribd. It has already gotten close to 59,000 reads and embedded views as well as 558 downloads.

Not bad for a little over a week.

So in celebration, I thought I would share some outtakes. The following images are the clips I didn't use from the book Deathstyle (if you read my booklet, you would know what Deathstyle is) because I felt they were so comical that they would distract from the seriousness of How They See Us.

Remember that horror movie which proclaimed "tell yourself it's only a dream."  Well in the spirit of that, when looking at these images, tell yourself "someone thought that these were true facts about gays. Some still do:" 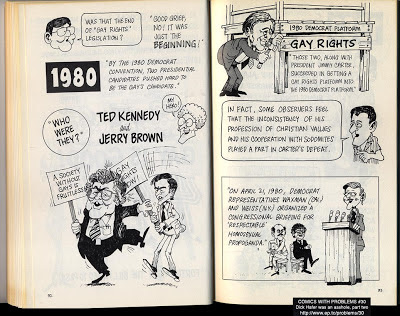 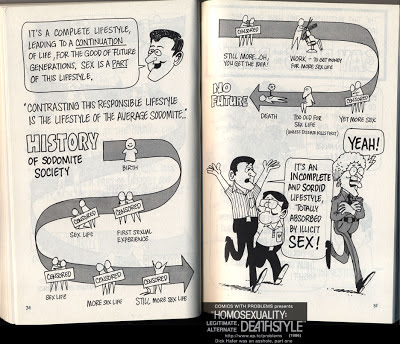 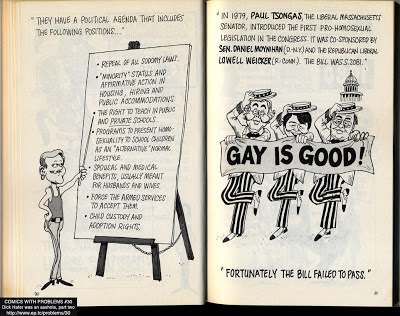 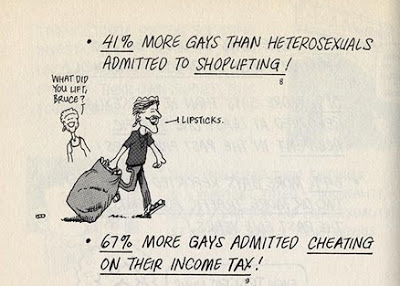 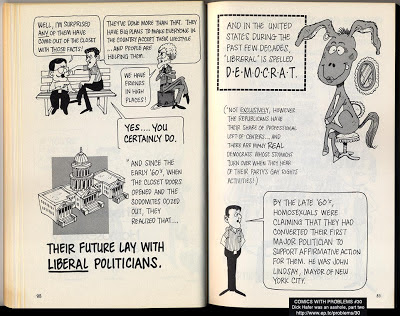 Posted by BlackTsunami at 3:24 PM 2 comments:

Dobson: 'Everything I Have Fought For is On the Line and is in Danger Now' - Awwww poor baby!

Focus On The Family President Concedes Homosexuality Is ‘Not A Super Sin’ - I don't care what Focus on the Family says. I'm not giving up my red cape and monogrammed "S" for nobody.

Jesus Days: Photos of the World Through the Lens of a Closeted Young Gay Man - Fascinating photo journal.
Posted by BlackTsunami at 8:55 AM No comments:

Perhaps the Family Research Council's Peter Sprigg should quit while he is ahead. As he continues  to milk the recent controversy involving Pastor Louie Giglio - whose  inauguration invitation to give the benediction was rescinded due to past anti-gay sermons he preached - he opens himself and FRC up for scrutiny.

Which, of course, is perfectly fine with me.

Sprigg wrote a piece complaining about how Giglio was supposedly treated wrong for "merely" giving the supposed Christian view of homosexuality:

What many people do not understand is that when a conservative says “homosexuality is a sin,” it is a reference to their chosen sexual behavior, not to their inherent human dignity. Christian theology teaches that all people, including those with same-sex attractions, are created in the image of God, but it also teaches that all people—liberal or conservative, homosexual or heterosexual—are sinners who can be saved only by the grace of God.


If only it were that simple, I wouldn't have a successful blog. Sprigg conveniently forgets the time when he said gays should be exported out of the United States:

or the time he said "gay sex" should be outlawed:

And I would be remiss not to mention the statements of FRC's president, Tony Perkins, which speak for themselves:


So you see, when it comes to Giglio, Sprigg, Perkins, FRC, and so many other anti-gay entities, it goes beyond calling homosexuality a sin. They smear gay people as the "dreaded other" out to cause mayhem and destruction.

I naturally disagree with all of their statements, but especially Perkins' last one. I'm a happy gay guy. And at times, I get downright delirious with joy.

That generally takes place every time I am able to demonstrate how hypocritical folks like him are.
Posted by BlackTsunami at 5:00 AM No comments: