Earlier, I wondered how one of our "favorite" anti-lgbt activist, Peter LaBarbera, would take the news that marriage equality had been passed in his residential state of Illinois.

We don't have to wait any longer to hear his whining: 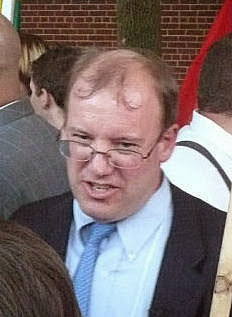 "It's very sad to see the Land of Lincoln now on the verge of officially defying God with our marriage laws . . . No matter what happens through the law or what politicians do, two men will never really be married, nor will two women. Marriage is one man, one woman.Sadly, as this state, and increasingly the country, kicks God to the curb, we're setting up all sorts of new-fangled legal arrangements – and that's exactly what homosexual so-called marriage is. It will now be easier in schools to propagandize in favor of so-called homosexual marriage.We will see freedom threatened across the state from people who don't want to support, for example, homosexual marriage through their own private business. They don't want to give that as an employee benefit, benefits based on a counterfeit marriage." - Peter LaBarbera in an interview with One News Now


Blah, blah, blah. Cry me a river, Peter. Or in other words:

Posted by BlackTsunami at 3:02 PM 2 comments:

Last night's elections was a massive success for the lgbt community while at the same time a disaster for folks who oppose lgbt equality. Let's take a few look a some news briefs illustrating this:

Victory Fund celebrates big wins for LGBT candidates - The Victory Fund breaks down all of our successes from last night.

Gay Rights Victories Pile Up In 2013 - A nice overview of the year in general. If this keeps up, Time magazine should give the lgbt community the "Person of the Year" award.

Illinois lawmakers vote to allow gay marriages - And let's not forget that yesterday, Illinois made it number 15. Hopefully Hawaii will be 16. I wonder how Peter LaBarbera is holding up to the news that he now lives in a marriage equality state.

NOM living out one horrible week (and it’s only Wednesday) - MEANWHILE, Jeremy Hooper breaks it down as to why the National Organization for Marriage lost has already lost the week. And as he says, "it's only Wednesday."
Posted by BlackTsunami at 8:57 AM No comments: