From a favorite site of mine, Box Turtle Bulletin, comes news that an old adversary of the gay community is taking a trip to Moldavia:


Moldova is a splinter of a country between Romania and Ukraine, a point of contention between Russians, Turks, and others for centuries, and one of the poorest states in Europe. An anti-discrimination bill that prohibits unequal treatment on grounds including sexual orientation is before its Parliament, due for debate at month’s end.

In the days before the debate starts, Paul Cameron is coming to town. An e-mail from the Alianţa pentru Salvarea Familiilor din Moldova (Alliance to Save the Family in Moldova) announces that the “U.S. sociologist, founder and president of Family Research Institute” will stay from October 24-29, and “will share the U.S. experience in implementing anti-discrimination legislation.” There will be a roundtable with “representatives of various parliamentary committees, ministries and other institutions of the state,” plenty of lobby meetings with lawmakers — and, of course, media will be saturated with Cameron’s fake statistics.

For the younger folks in the gay community and for the rest of the folks who may not be aware of Paul Cameron, allow me to introduce you to a little bit of sordid anti-gay history. Every lie, every piece of distorted of junk science about the gay community, even some ways in which religious right groups distort actual science to demonize the gay community were either formulated or "improved upon" by Paul Cameron.

He is the man is responsible for pushing the following myths about the gay community:


Lesbians are more likely to die in car wrecks,

Gay men molest children at a high rate and are more likely to be serial killers,

Gays and lesbians in the military are more likely to rape their heterosexual counterparts.

Basically, it was Cameron who in the 80s came up with the idea of aggressively using science to prove that homosexuality is a "dangerous lifestyle." The problem is to do this, Cameron attained a reputation for either distorting legitimate science or distorting his own work to gain the conclusions he wanted from his "studies." He has also been discredited and censured by many group and individuals on the left, the right, and in the middle due to his bad research techniques. Several of his studies have been criticized for such errors as having small sample sizes, showing an anti-gay bias in interviews, and not having enough responses to establish a suitable analysis.

'NOM called out on hypocrisy' and other Tuesday midday news briefs

For Children of Same-Sex Couples, a Student Aid Maze - If receiving student aid is this much of a problem, just think of the other problems children in same-sex households have to deal with. You see this is what NOM and the rest of the religious right and their phony victims want to take attention away from - real victims of discrimination and prejudice.

Black and Transgender: A Double Burden - Kudos to The Root for running this very important piece.

Fox Host Attacks College For Voluntary LGBT Application Question - The way Fox News misrepresented this situation should serve as a warning to the gay community. Imagine a highly-watched news network aggressively pushing anti-gay half-stories and homophobic guests. Fox isn't doing it with the fierceness it is using to undermine President Obama. But imagine one day if it does.

Please forgive me Mr. Rick Santorum for not feeling sorry for you 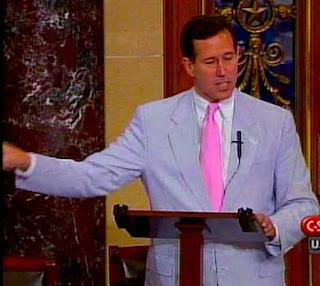 Rick Santorum feels like he has been bullied by a recent episode of Saturday Night Live which made fun of his run for president:

Santorum -- depicted by actor Andy Samberg in the sketch, titled "Yet Another GOP Debate" -- suggested that the segment was "bullying" during an interview with New Hampshire radio station WGIR on Sunday. The former Pennsylvania senator said he had been "hammered" by "the left" for his support of conservative principles.

"The left, unfortunately, participates in bullying more than the right does," Santorum said. "They say that they’re tolerant, and they’re anything but tolerant of people who disagree with them and support traditional values."

I don't feel the least bit sorry for Santorum. He is a public figure which makes him a target for comedians. Over the years SNL has made fun of  many public figures from President Obama to Star Jones.

And when Santorum acts like he is Joan of Arc at the stake, it makes it harder for me to sympathize with what a mockery his name has become.

Yesterday, another child committed suicide because he couldn't deal with the bullying which comes with being openly gay.

And unfortunately he is the latest in a long line of children who feel that there will not be a better tomorrow for them because of the ignorance of others.

So you will have to forgive me if I don't feel sorry for you, Mr. Santorum.  You are a self-righteous phony who deserves every bit of mockery rained down upon you.

In the early days of Christianity, their oppressors crucified them, fed them to lions, and burned them like torches. Somehow, I don't think that being made fun of by a late-night comedy show compares to these atrocities.

Mr. Santorum, you are not being bullied. Your ignorance is indicative of the reasons why others think its okay to bully.

So please get over yourself and stop acting like a straight-up BIYAAAATCH.

Posted by BlackTsunami at 4:42 AM 4 comments: