Trump's ban on transgender troops has bad day in court 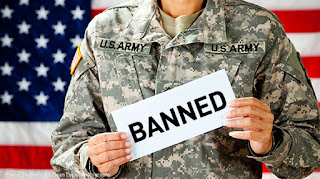 While Trump's newest policy on banning  transgender men and women from serving in the military came out Friday, his Administration went to court today in Seattle to defend the ban in general.

It didn't go well for them. To put it nicely, the judge might as well have said "how in the world are y'all gonna come up in my court with this bullshit?"

Washington publication The Stranger broke down the proceedings:

Justice Department attorney Ryan Parker did not have an easy case today attempting to argue in favor of President Trump's transgender military ban in US District Judge Marsha Pechman's courtroom.

The plaintiffs in the case, which now include both transgender service members and the state of Washington, filed the lawsuit nearly eight months ago after Trump tweeted that transgender individuals would no longer be allowed to serve in the military.

. . . Justice Department attorney Ryan Parker attempted to argue that because of the new policy (which ultimately resembles the old one), the plaintiffs' case against the government over the old transgender military ban memo was moot. But Judge Pechman, who had earlier issued a preliminary injunction finding that the old ban caused immediate harm to transgender individuals, did not appear to buy that argument.

"I've read your brief," Judge Pechman at one point told Parker. "I can't find any factual underpinnings in what you've supplied to me in the brief."

Pechman also criticized Parker and the Justice Department for failing to respond to the state of Washington's arguments made in a separate brief altogether, failing to put their briefs in the right font, failing to make their arguments outside of their briefs' footnotes. She even once considered holding the Feds in contempt of court. Perchman also grilled Parker for not including arguments about the legitimacy of the Twitter-announced ban in the existing briefs, and merely focusing on the last-minute policy issued on Friday.


The ruling could come within a month. Meanwhile, according to The Hill, more than 20 retired generals and admirals issued a statement opposing this latest rendition of the ban.
Posted by BlackTsunami at 4:00 PM 1 comment:

The Family Research Council is doubling down on the lie that Trump's recent transgender troops ban came from the Department of Defense rather than an ad-hoc committee of anti-LGBTQ activists (including FRC head Tony Perkins.) Yesterday, the group retweeted the following from one of its allies in Congress:

(2/2) @DeptofDefense focus should be on fighting and winning our nation's wars, not advancing a political cause at the expense of lives and common sense.
— Rep. Vicky Hartzler (@RepHartzler) March 26, 2018 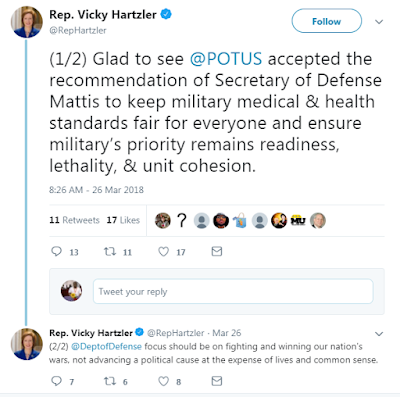 Hartzler was the point person in getting Trump's original transgender troops off the ground, including constantly needling him about it and supplying misleading data (which also included astronomical monetary figures about how much it would cost to allow trans troops to serve openly - figures which her office refused to explain about when asked) to justify it:

Hate group to host Congresswoman who funneled its false data

Trans military ban ignored by reporters, White House at briefing - Why I'm pushing hard for the above issue. Very few in the media has covered this and our community has a way of being desensitized after a while. It's really not our fault. When you have to deal with homophobic bigotry, desensitization is a coping mechanism.

College soccer player came out as gay at Christian college and it was no big deal - Yet another reason why we have to stop people like Robert Jeffress and Franklin Graham from bogarting the debate about the LGBTQ community and religion.

Gay couple to open Wisconsin's first group home for LGBTQ youth - This is wonderful and I wish them much luck.
Posted by BlackTsunami at 9:19 AM No comments: