'Trump trying to play lgbts & Muslims against one another' & other Tue. midday news briefs

Trump Is Trying to Turn Gays Against Muslims - The National for Marriage tried to pull this crap with gays and black folks. We didn't fall for it then, I really hope we don't fall for it now. The only reason why Trump wants lgbts to fear Muslim is to take attention away from his cooperation with those who would seek to take our equality away in this country:

A Look at LGBT Artifacts From the National African-American Museum - THIS is wonderful. I am glad that we lgbts of color are included.

Evangelist Franklin Graham: Ignore Trump’s Taxes! We Have to Stop Transgender Soldiers’ Rights! - Modesty keeps me from thoroughly commenting what I feel.
Posted by BlackTsunami at 10:09 AM 1 comment:

Entitlement at the root of homophobic bigotry 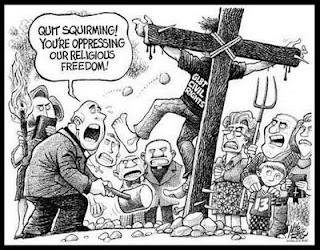 So I got this interesting message from someone whom I consider to be an opponent of lgbt equality:


I'm sure a lot of you recognize this as the tired semantic wordplay which goes like this - lgbts are hypocrites because they claim to be tolerant unless you say something they don't agree with, then they try to shut you down.

That argument is the proverbial last refuge of the homophobe, especially in this case when the post at hand which led this anonymous person to send me the message had nothing to do with silencing anyone. The post was about Mike Pence's duplicity in claiming that Indiana's religious liberty law weren't anti-lgbt in spite of him being accompanied by anti-lgbt activists while signing the law.

So that's this person's mindset.  He or she doesn't see us as tax paying American citizens who deserve equality. He or she thinks the proper way for lgbts to "show tolerance" to those who "disagree" with our supposed lifestyle is to allow ourselves to be discriminated and treated like second class citizens.

Or to put it another way, the following is the video of Don Feder, spokesman of the anti-lgbt World Congress of Families, talking about us in awful terms:

“The problem is this is a way people are living and they’re demanding that it be respected, they’re demanding that all of society be changed for their comfort and their convenience,” Feder said. “We’re not saying that these people have to be persecuted, we’re not saying that you can’t have compassion for them, of course you can, but you can’t let this be the role model and you can’t allow Christians and other religious people to be persecuted because they refuse to go along with this agenda.”

“You know, other people have demanded minority status based on their religion, based on their race,” he continued. “This is the first group that demands minority status based on what they do in their bedrooms. And that’s what makes it so dangerous. And if you look at the United States, I mean if Africans look seriously at the United States, they should be horrified at what’s going on.”


What Feder - and that anonymous commentator - proves is that the struggle for lgbt equality is in fact one of entitlement.  The religious right - such as Feder, etc.- think that they are entitled to dictate to us the terms of who we are, what we deserve, and what we should have based upon their religious beliefs and hysterically inaccurate notions of our lives.

It will be my pleasure to disappoint these folks and their ridiculous ideas of supremacy as many times as I can.
Posted by BlackTsunami at 6:35 AM No comments: